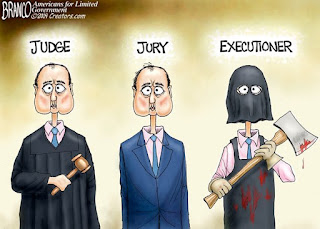 . . . with just a dab of Russiagate thrown in. Stacy McCain, The ‘Historic’ Impeachment

The morning Drudge headline stack:
. . .
What to make of all this? It’s all a giant pile of bat guano craziness. Our Constitution grants the President nearly unlimited authority to conduct diplomacy, which was what President Trump was doing on that call to the newly-elected president of Ukraine. Somehow — and I swear, I can’t fathom it — Democrats have convinced themselves that urging President Zelensky to take a look into Hunter Biden’s Burisma hustle, etc., amounted to “high crimes and misdemeanors.” Because no further psychiatric damage was possible after the Tide lost Saturday, I decided to switch the TV in my bunker office over to CNN. Yes, lets attempt that Gonzo voodoo channeling of the Ghost of Impeachments Past to try to understand exactly how in the Hell they’re rationalizing this delusion.

I could fill a page with impeachment links alone, but I'll just hit some highlowlights first. From Sundance at CTH, Hearing Highlights – Jordan, Stefanik and Ratcliffe Deconstruct Impeachment Narrative… this little gem from Jordan:

More at the link, of course. Althouse, "It feels like people are getting a little exhausted from all the impeachment coverage and the hearings haven't even begun," the NYT podcast begins today. Also "Castor is asking Taylor to essentially speak to Trump’s mindset. Taylor resists doing so, saying, 'I don’t know' more than once."


UPDATE: From one of the NYT commentators, Kenneth Vogel: "A small victory for Republicans: George Kent testifies that Ukrainian prosecutors 'should' investigate the oligarch owner of Burisma, the gas company that paid Hunter Biden, for possibly paying a bribe to kill an investigation in 2015."

It's a "small" victory because it's "for Republicans." If it were "for Democrats," it would be a mind-blowing bombshell.
. . .
So much of this whole enterprise is about figuring out what's in Trump's head. Why do some people assume they know? I instinctively mistrust these people who purport to know and (obviously) won't acknowledge if they are self-aware enough to know that they're talking about something they cannot know.


Can anyone guess what it might be? C’mon, it’s been known for some time, even if House Democrats and their media supporters on impeachment have been too, er, polite to mention it. These witnesses to a “quid pro quo” or even bribery by Donald Trump have one thing in common … they never talked with Trump.

This could pose a problem for the Democrats Senator Graham on Impeachment: “I Will Not Allow Hearsay Evidence During Senate Trial”… (sundance)

Shall we switch gears for a while before a link dump to take care of the remainder of impeachment? The "ayes" have it.

Not exactly news from John Sexton at Hot Air, IG Horowitz Has Asked Witnesses To Review His Report, A Final Step Before Its Release and from Ace, AG Barr: It Is My Understanding that the IG Report on FISA Corruption is "Imminent" Depending, of course, on your understanding of the word imminent. But bad news from WSJ, Justice Department Filing Suggests No McCabe Prosecution Imminent, "In pending lawsuit, DOJ says it won’t block release of documents related to former deputy FBI head based on probe." Rushbo, The Deep State Cabal Against Trump Is Very Real. James Bovard, USA Today; As the deep state attacks Trump to rave media reviews, don't forget its dark side

From Sharyl Atkisson, 96 Media Mistakes in the Trump Era: The Definitive List. Updated occasionally. Most are not mistakes; they're enemy propaganda.

From USA Today, the Roger Stone trial goes to the jury, Prosecution says Roger Stone lied to Congress to protect Trump; defense says there was no motive. Lying to Congress is a crime? Who knew, besides, of course, Michael Cohen.

Speaking of lying to Congress, Schiff: Who, Me? I Don’t Know The Whistleblower’s Identity (Capt. Ed).


And we should believe Adam Schiff because of, er, his long track record of honesty about his contacts with the whistleblower? Come on, man. The chair of the impeachment inquiry hearings accused Rep. Jim Jordan of issuing a “false statement” in claiming that he knew the identity of the whistleblower. After getting four Pinocchios from the Washington Post for lying about contacts between his office and the whistleblower, Schiff’s hardly in position to complain — or to be taken at his word. . . .

Charlie Martin at PJ Media, The Real Mystery About C*aramella and Vindman. One had previously been caught leaking secrets, the other leaking and disobeying orders; how did they keep their security clearances and positions of authority?


How, exactly, do you lose a job for security violations and return to the CIA? One would normally lose one's clearance, and even janitors and cafeteria workers at CIA are cleared.

Then there's LTC Alex Vindman, NSC staffer and active-duty Army officer. He has testified that he disobeyed orders, advised foreign governments to resist Trump, leaked internal information to others, and was actively working to subvert the president's foreign policy.

Now, Gods know I'm not a UCMJ lawyer, but if you look at the Uniform Code of Military Justice, that sounds like an Article 88 (Contempt to officials), Article 92 (Failure to obey order), and Article 133 (Conduct unbecoming an officer). There's an argument to be made for Article 94 (Mutiny) as well.

So this too is odd. Normally, under these circumstances, a serving officer would at least be relieved and very possibly confined awaiting court-martial.
. . .
The point here is that all of these things would, in the normal course of events, be security violations punishable by everything from actually losing a job to extended terms in Kansas making small rocks.

Why was this not the normal course of events?

From Da Beast, Ivanka Trump Tells Her Dad: Don’t Tweet the Whistleblower’s Name! No need; it's already out there. 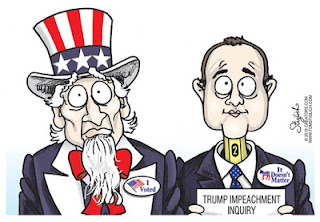 Impeachment launch: Can Dems make the case stick -- and make it quick? Update: "Now we get to fight back"

Taylor and Kent: We think Giuliani was looking to dig up dirt on a political rival in Ukraine, not promote U.S. national interests

What to expect when the Trump impeachment hearings begin - Axios 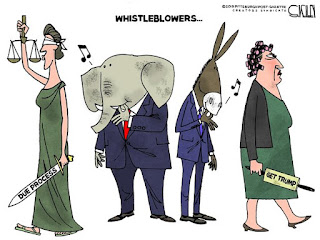 Fallout from impeachment will be felt far and wide

4 Things to Expect as the Trump Impeachment Inquiry Goes Public

So Serious: NBCNews.com Swoons Over Drag Queen At Impeachment Hearings

"Hearsay can be much better evidence than direct (evidence)"
– Democrat Rep. Mike Quigley

You can’t make this stuff up. They’ve gone totally bonkers. Left is right and up is down. It’s gonna be a long 5 years for these lunatics. Pray for them. 🙏🏼 pic.twitter.com/RJUDC6Qjgd
— Robby Starbuck (@robbystarbuck) November 13, 2019 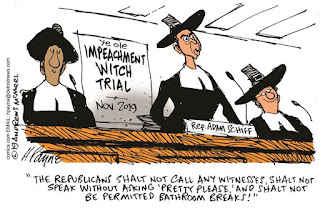 "Rudy will be cut loose": GOP reportedly ready to make Giuliani the fall guy on impeachment -- if necessary