While most of us wallowed under the influence of turkey, stuffing, green bean casserole, and pie, a few die hard labored in the click mines to bring us fresh, or at least rewarmed Russiagate. Sundance at CTH struggled to remember that it's been 200 Days – Where Are Rosenstein’s Scope Memos to Robert Mueller? – Or is One Impeachment a Small Price to Pay to Preserve the Institutions?……. It's a good question. Obviously Bill Barr is not in a hurry. 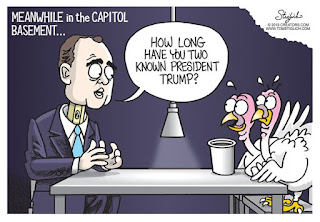 Today former DAG Rod Rosenstein sends an openly coded-message to AG Bill Barr, requesting that Barr stick with him and not highlight the extent of the DOJ and FBI corruption for the sake of their institutions.

This should be amusing, or infuriating, or both; according to Chuck Ross at Da Caller, DOJ Report Will Describe ‘Spygate’ Professor Stefan Halper’s Contacts With Trump Campaign Advisers: Report


Halper paid Papadopoulos $3,000 under the auspices of writing a research paper about energy issues in the Mediterranean Sea. Papadopoulos said he grew suspicious of Halper and Turk during their London meetings because they asked random questions about Russia’s cyber activities during the campaign.

But don't you dare call it spying. From Breitbart, Jason Chaffetz says of the  NYT Pre-Spinning of Inspector General Report ‘True to Script’ for Democrats


“By its very definition, a FISA application is a warrant to spy on somebody,” Chaffetz said. “This person, Carter Page, happened to be on the Trump campaign. So, the mere fact that they’re trying to discredit that says a lot about the weakness of their case and their allegations.”

“But, the reality is this happened and the Inspector General— this will be his fifth report that he’s come out with regarding the FBI at the highest echelons. And, let’s also remember: they didn’t spend 18 months working on this to say, ‘Hey, everything went swimmingly at the Department of Justice,'” Chaffetz added.


The unstated premise of such hair-splitting coverage is that spying isn’t spying if “well-intentioned” liberals do it. But could you imagine the furor the media would have expressed if the Bush administration had tried to entrap Obama aides using such low means? Republicans would have never heard the end of it.

The Inspector General’s report, no matter how feckless, will support Trump’s major contentions. Trump said that Obama spied on his campaign; he did. Trump said that Trump Tower was wiretapped; it was. (The FBI took out FISA warrants on four members of the campaign, which gave the FBI the power to reach into Trump Tower and intercept communications.) Trump said that bias colored the investigation; it did. (The IG report, as even the Times acknowledges, will say that a Trump-hating lawyer in the FBI, Kevin Clinesmith, altered a document during the FISA application process and will detail many other screw-ups.)

True, the Inspector General, Michael Horowitz, is an overly cautious creature of official Washington and will no doubt pull his punches. But just because he is afraid to reach certain conclusions about Spygate doesn’t mean they are untrue. It is also important to remember that Horowitz’s investigative powers were limited.

Angelo Codevilla at AmGreat, FBI Diagnosed With CIA Disease, "An inspector general’s report underscores how the FBI departed from its tradition of professionalism and honesty in pursuit of domestic political influence. " The FBI's tradition is to be a political tool, sadly. But read it anyway.

And at AmThink, Media Hypes Fusion GPS Founders as Victims. The Fusion GPS boys and girls are just media types who decided it was more honest to do their partisan dirty work on a per piece basis rather than a newspaperman's declining salaries. Of course the media covers for them.


Sondland had previously undergone a public confirmation hearing to become an ambassador, yet none of these allegations surfaced at that time. It is only now, when Sondland is involved in the impeachment hearings, that these women have come forward – and each have an ulterior motive for doing so.

Further, the media outlets that worked together to report the women’s allegations – ProPublica and Portland Monthly – acted irresponsibly and unethically during the reporting process, and are expected to face a defamation lawsuit from Sondland. In a letter from Sondland’s attorney, Jim McDermott, the ambassador denied the allegations and explained that each woman had a motive to malign Sondland. “Notably, what each of these three women share in common is that they pursued Ambassador Sondland for financial and personal gain — an investment, a job, and insurance brokerage work — and he declined their proposals,” McDermott wrote.

Paul Bedford at AmGreat goes on about Fiona Hill’s Un-American Idea of America. Why unelected bureaucrats are not put in charge of foreign policy.


Most of the “damning” testimony at the hearings focused on how awful it was that Trump delayed funding to Ukraine and how he criticized Yovanovitch. It was lost on these witnesses that they are supposed to serve our elected representatives and not serve themselves. Their foreign policy agenda was rejected when Americans elected Donald Trump.

And it may have escaped your notice while the turkey cooked, but the McGahn House Subpoena Suddenly On Hold… Again, from Jazz Shaw at Hot Air.


Keep in mind what the Judiciary Committee actually wanted to talk to McGahn about. This fight is a holdover from the Russia, Russia, Russia investigation. Democrats on the committee want to question the former counsel to determine if he knows any secrets that could implicate the President in an attempt to obstruct the investigation.

Wait… weren’t we supposed to be done with all of the Russia stuff now, having moved on to the high crime or misdemeanor of Trump placing a phone call to the Ukranian president? Well, perhaps the Democrats are looking for a two-for-one deal.

Josh Hammer at DaWire has an ongoing piece on Impeachment Wire: The Latest On The Effort To Impeach President Trump

Perfesser Jacobsen at LI, Impeachment: “Democrats are like the dog chasing the car and they found it and they don’t know what to do with it”

Fletch Daniels at AmThink, Democrats Ponder Impeachment Pivot. They keep spinning, hoping to throw off something that will work. But their best shots have been misses.


I knew that Democrats were in deep trouble when my teenage daughter asked me to explain the current impeachment effort at the dinner table. She ended the conversation with this: "This is so dumb."

People see it for what it is; a transparent attempt to get the President with any available tool. At AmGreat, Andy Fillat, Impeachment Makes the Best Case to Unseat Dems "The debacle in the House has laid bare the shortcomings and self-interest of the Democratic Left. The 2020 election offers an opportunity to begin a repudiation of their behavior." That would be great, but don't get your hopes too high; there are an awful lot of low information voters out there.

Also at AmGreat, Ken Masugi discusses Who Will Terminate the Would-Be Terminators? "In both the impeachment inquiry and the investigation of President Trump’s tax records, House Democrats are using unconstitutional means toward anti-democratic ends. SCOTUS announced yesterday that it was reviewing the Trump tax return case. Ken Masugi discusses."


I quote from Judge Neomi Rao’s sharp, historical distinction between the House’s legislative powers and its impeachment powers from her October 11 dissent: “Investigations of impeachable offenses simply are not, and never have been, within Congress’s legislative power . . . . Allowing the Committee to issue this subpoena [of Trump’s tax returns] for legislative purposes would turn Congress into a roving inquisition over a co-equal branch of government.”

What would really decide it would be if the Senate decided to demand RBG's tax records, just because it could.

Jazz Shaw claims Hunter Biden’s “Stripper Baby Mama” Isn’t A Political Story. Burisma Is. But would the media overlook a similar scandal involving the Trump kids? I rest my case.

Linked at Pirate's Cove in the weekly Sorta Blogless Sunday Pinup and links and at The Daley Gator in Links to go with your Thanksgiving Leftovers.
Posted by Fritz at 10:06 AM