Got a problem with Russiagate? Join Russiagate anonymous and go to a meeting and talk about it just  like the professional whistleblowers. From Da Wire, Limbaugh: Whistleblower’s Identity Revealed, Now We Know Why Dems Wanted To Hide It, Duh, it ties back them early, and makes it seem like the set up it is.


“There’s another reason,” Rush said in reference to his identity remaining secret. “Nobody would be impressed by this guy. He’s a kid — and I don’t mean to be insulting 30-year-olds. Do not misunderstand me here. But he’s not … When you hear ‘CIA agent,’ ’embedded CIA agent,’ you think, ‘Spy, national security!’ You think ‘grizzled veteran,’ not somebody who doesn’t shave but twice a week. He’d be totally unimpressive as an image witness.”

Via Wombat's In The Mailbox: 11.01.19, Joe For America has Alleged Identity Of Whistleblower Leaked. Dr. John at Flopping Aces, Eric Ciaramella is lucky it’s Trump he’s spying on and not Obama. He'd be in jail, and reviled nationwide in the press as a traitor.

But it sounds like he's starting to get nervous; Capt. Ed at Hot Air,  Hmmm: Whistleblower’s Attorneys Break Off Negotiations With House — And Threaten The Media. Dan Flynn at AmSpec is Blowing the Whistle on the Whistleblower (such an obvious title even I used it) A ruling-class prodigy has made his mark spying on Americans for the CIA and Adam Schiff.


Ciaramella graduated from a high school that costs $30,000 a year to attend, received his undergraduate degree from Yale, and obtained a master’s from Harvard. A few years after graduation from that tony private high school, the youngster estimated to its alumni magazine of trips to 28 different countries (he admits he lost count).

When others provide you with the best education and pricey junkets to obscure parts of the globe, not getting the president you asked for might come as a terrible blow. So Ciaramella sought to rectify this injustice by anonymously peddling secondhand gossip — false in large part — designed to instigate another round of impeachment discussions. He did so by first going to Congressman Adam Schiff. When you seek to report a federal crime, go to the FBI. When you seek to gin up political trouble, go to Adam Schiff.

This came as the latest instance of the 33-year-old CIA employee using his government position for partisan, political ends. . . .


Here is what he said: “I was concerned by the call. [1] I did not think it was proper to demand that a foreign government investigate a U.S. citizen, and I was worried about the implications for the U.S. government’s support of Ukraine. [2] I realized that if Ukraine pursued an investigation into the Bidens and Burisma, it would likely be interpreted as a partisan play which would undoubtedly result in Ukraine losing the bipartisan support it has thus far maintained. This would all undermine U.S. national security. Following the call, I again reported my concerns to NSC’s lead counsel.”

The two portions preceded by my bracketed numbers are Vindman’s opinions. Let’s analyze what he said. It is important to remember that he was not speaking off-the-cuff or just responding to questions. This was a carefully prepared opening statement that had been closely vetted by lawyers and others.

Regarding his first opinion, he says, “I did not think it was proper…” That is pure opinion, not fact. Moreover, if it is improper to ask a foreign government to investigate a U.S. citizen, that would no doubt come as a big surprise to many in government.

Vindman’s statement is, in short, an unfounded and unsupported opinion. And the notion that the president could not properly ask a foreign country to investigate a U.S. citizen who may have engaged in illegal activity is nonsense; Joe Biden does not get a pass from investigation just because he is candidate for the nomination of his party.

There is nothing improper or illegal about an investigation into potentially illegal actions, much less anything that rises to the level of a high crime or misdemeanor. The notion that it does is so much tommyrot.

So, absent personal knowledge of a high crime or misdemeanor, Vindman’s first personal opinion is immaterial. I think most voters not swirling around in the vortex of Trump hatred care more about the opinions of the president and the secretary of State than those of a mid-level officer, at least on this topic.

Vindman’s second opinion is that if Ukraine investigated the Bidens as President Trump suggested, it would lose the support of Democrats in Congress. That may well be, but in addition to being a personal opinion, it is a pure political concern. It is properly the concern of the presidents of the United States and of Ukraine.


When Lt. Col. Alexander Vindman appeared before members of Congress on Tuesday to discuss what he knew about President Trump’s conversations with Ukraine’s president, he was violating an order from his commander in chief not to cooperate with the House’s impeachment inquiry.

He is likely protected from legal ramifications from showing up to testify, a former Army judge advocate told Military Times on Thursday. But it remains to be seen whether what he told legislators could get him charged with a crime ― and, of course, how his choice to rebel against his White House chain-of-command will affect his career.

The Military Whistleblower Protection Act prohibits government officials from interfering with a member of the military in communicating with Congress or an inspector general. Adding to the complexity is that the president gets to determine what is and isn’t classified.

In any event, his military career is toast, he will never be trusted again, so he'll probably wind up sitting on panels with Clapper and Brennan on CNN. WaEx, 'Fireside chat on live television': Trump says he wants to read Ukraine call transcript to American people. That might be amusing. Get Borat to play President ZZ Top. WaPoo, White House official who heard Trump’s call with Ukraine leader testified that he was told to keep quiet. But not by Trump, but by his superiors on the NSC. I'm guessing he thought it was above Vindman's pay grade to second guess the President.

And now, onto The Deep State and UkraineGate with Stacy McCain


Have I ever mentioned how much I hate keeping up with the day-to-day partisan warfare in D.C.? Many journalists crave such a diet, but I find it tedious, mainly because it’s “pack” reporting, everybody chasing the same story, whereas I prefer to find some little-noticed incident nobody else is covering and turn that into a story. All this to explain why I dread this “UkraineGate” impeachment carnival — the Beltway press corps will love it, but there’s no real fun to be had in trying to cover the same story that’s being covered by a thousand other reporters and drawing commentary from a thousand pundits. How can I possibly make any really valuable contribution to such a story? But never mind my personal problems, there’s a witch-hunt underway in Washington . . .

But you know who eat's it up? Sundance at CTH, DOJ Files Surreply Response to Flynn Brady Motion – (With a valuable little nugget of a mistake)….

♦Taking the #4 bullet-point first, the DOJ is being profoundly obtuse. Flynn’s original defense lawyers (firm: Covington, Kelner, Anthony, and Langton Inc.) were the attorneys who advised Flynn on how to complete the FARA paperwork/filing. When the DOJ threatened to use the FARA filing as evidence against Flynn, in essence the DOJ was accusing Covington of manufacturing false documentation.

Matt Vespa at Town Hall, ICYMI: The Democrats’ Trump Impeachment Push Is Ripping The State Department to Shreds "Well, We Now Know Who President Trump’s Enemies Are At The State Department" Nearly everybody? Thomas Lifson at AmThink reports A stunning confession from a Deep State member subverting the constitutional republic

And too much impeachment nonsense to wade through individually: 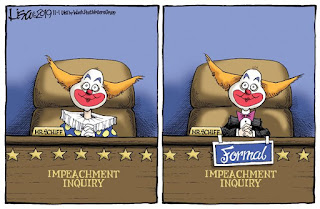 The Morning Briefing: Impeachment and a House Divided Perhaps Forever
House Dems pass their phoney-baloney impeachment resolution with no GOP defectors - Conservative Review
Impeachment Vote Will Cost These Dems Their Seats | The American Spectator
GOP: House Democrats Had to Be Told Not to Cheer Impeachment Vote | Breitbart
This ‘Impeachment’ Is a Cover-Up | The American Spectator
White House Responds To Impeachment Inquiry Vote | The Daily Caller
Jordan: ‘Trying to Put a Ribbon on a Sham Process Doesn’t Make It Any Less of a Sham’ | CNSNews
Gohmert Warns On Impeachment: ‘About To Push This Country To A Civil War' | The Daily Wire
The 'Evil Party' Earns Its Name With Hatchet Jobs Like the 'Whistleblower' 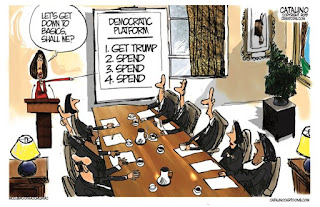 Dozens of conservative groups file ethics complaint against Nancy Pelosi over impeachment process - Conservative Review
Steve Schmidt: If Trump Is Not Impeached the American Republic Will No Longer Exist | Breitbart
Althouse: "The Pelosi impeachment resolution was supposed to deprive the GOP of its complaint that the process wasn't formal. Instead, it formalized a rigged process..."
Rep. Ratcliffe on Impeachment Fiasco: “At the end of the day the truth will defend itself”… | The Last Refuge
Biden slidin': 'Frontrunner' tumbles to fourth in NYT/Siena Iowa poll
Stasis: WaPo/ABC impeachment numbers barely budge during Schiff 'inquiry'
Impeachment is getting real - Hot Air
Impeachment probe eyes Mulvaney’s office in early effort to hold up Ukraine aid - Hot Air
House Dems: Articles of impeachment against Trump highly likely to include an obstruction charge as well
Impeachment in microcosm: The Don Young/MoveOn headbutt
The Democrats’ 2020 Implosion : The Other McCain
Ace of Spades HQ- Poll: Across Six Swing States, Voters Oppose Removing Trump From Office
Why the impeachment fight is even scarier than you think - Hot Air
Growing number of GOP senators consider acknowledging Trump’s quid pro quo on Ukraine - The Washington Post
As Trump moves to bully witnesses and derail impeachment, Democrats see obstruction - The Washington Post
Posted by Fritz at 9:24 AM