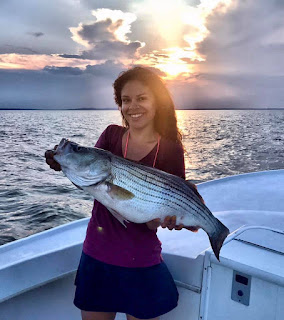 We have been eagerly awaiting, or perhaps dreading, the roll out of Atlantic States Marine Fisheries Commission orders regarding the Striped Bass fishing for the Atlantic Coast. Well, they're out, and they are asking for a pretty big reduction in Striped Bass  take; Bay Journal: East Coast fishery managers order 18% cut in striped bass harvest


Acting to stem serious declines in the striped bass population, East Coast fishery managers have ordered an 18% harvest reduction for the coming year. How that will be done in the Chesapeake Bay remains to be seen.

The Atlantic States Marine Fisheries Commission’s striped bass management board on Wednesday agreed to the reduction after an extended debate over how to respond to a scientific assessment earlier this year that found the commercially and recreationally valuable species has been overfished for some time.

The board ordered an 18% cut in commercial harvest quotas in all East Coast states. It also called for comparable recreational catch restrictions. In coastal waters, anglers would be limited to just one fish per day between 28 and 35 inches in length, while in the Bay it would be just one fish per day at least 18 inches long. Anglers are allowed to keep two fish a day now in Maryland; Virginia has already reduced its limit from two to one. 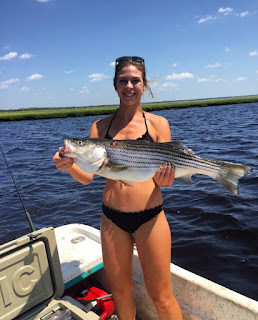 Because the assessment found that many fish were dying after being caught and released, the board also ordered states to require that recreational anglers use circle hooks, which are less likely to injure the fish, beginning in 2021.

Striped bass, also known as rockfish, are one of the most popular sport and commercial fish in the Bay and along the mid-Atlantic coast, and that popularity has led to problems.

Overharvesting drove the population precariously low in the early 1980s, which prompted Maryland to impose a five-year fishing moratorium and other states to enact shorter bans. The fish rebounded, reaching a high abundance in the early 2000s.

But now striped bass have been declining for at least a decade, attributed in part to less successful reproduction. The assessment also found that millions of fish were dying after being released by recreational anglers, usually because they were too small to keep. The review estimated that more fish died after being discarded than were actually kept in 2017. 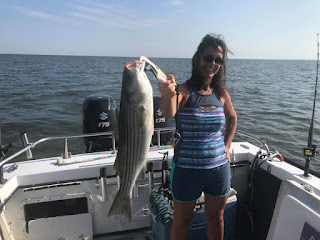 The board voted instead to require equal percentage reductions from both commercial and recreational fisheries, noting that public comments overwhelmingly favored that approach. Virginia sided with the majority. 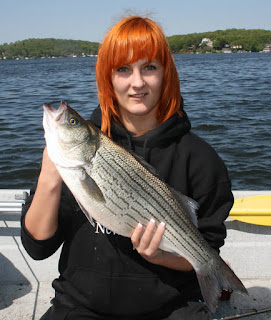 But state fisheries managers also were given latitude to vary from the board’s prescribed measures as long as they achieve “conservation equivalency,” meaning that they achieve comparable reductions.

Maryland fishery managers are weighing that approach, with plans to propose changes that will result in a 20% reduction in mortality from the recreational fishery. . . .

The actual draft of the plan for Maryland has been released to fight over:

The department is considering:

The third provision, "Prohibiting catch and release or targeting striped bass from March 1 through April 30" is fairly controversial. It would prohibit catch and release Striped Bass fishing throughout Maryland's portion of the Bay during that time, which would affect a few hard core recreational anglers in the Bay, a small number compared to the number of anglers in the warmer months, and a few hard core guides, like Walleye Pete, who take anglers out and fish for the giants that hang around warm water discharges. Critics say that this kills big spawners and inhibits others from spawning. Proponents say studies show that the kill from catch and release in cold water is negligible, and no studies have ever been done to support the idea that it is inhibiting the spawners. I doubt the fish saving is significant, because overall annual estimate of 9% C&R mortality is being projectd onto the cold water fishery is a gross overestimate, though no doubt, some fish die. My reading is that this is a term demanded by commercial fisherman as "revenge" for previous cuts in the commercial quota.

Personally, I don't think an 18% cut is sufficient. Historically, the ASMFC is at least a couple of years behind the curve, and with the report of a very poor YOY index for MD this year, I think stronger action is warranted, even if my hobby is significantly impacted.

Pete is prepared and planning to go to Florida to guide for March and April if this provision is implemented.

UPDATE: The Wombat is back in business, with Rule Five Sunday: Black Widow.