We have two different conflicting opinions on why Inspector Gadget General Horowitz's report on FISA abuse has been delayed. One version, from Thomas Lifson at AmGreat, cites the interview with Joe DiGenova and Victoria Toensing that I posted previously, to postulate that


1) The delay on the OIG FISA report is "partially" due to John Durham's new Grand Jury activity--which can only mean that Durham is already taking testimony from persons named in IG Horowitz's report, and

2) Durham is actively investigating the leak of the Flynn/Kislyak phone call to David Ignatius of the WaPo, which diGenova describes as "a 20 year felony." Ouch! Maybe that person--or persons--will want to go for a deal? But they'll have to have something truly major to offer. Something that Durham can't get without their cooperation. And count on it

The, of course, there is sundance at CTH who sees something more sinister: Is Pending IG Report on FISA Abuse Being Held-Up To Facilitate NSA Bulk Data Re-authorization That Expires December 15th?…


I suspect this NSA database is being continually data-mined by ongoing institutional operatives and contractors who are working against the Trump administration. I suspect the surveillance of their political opposition is ongoing….

And Paul Sperry, on Twitter, on why the Senate has not completed it's report on "Russian Collusion":

BREAKING: Democrat Sen. Mark Warner, vice chair of the Senate Intelligence Committee, is holding up release of findings of panel's investigation into allegations of Trump-Russia "collusion." Report, which had been due for release in Sept, is said to fully exonerate Trump,advisers pic.twitter.com/uBGwk5SaW9
— Paul Sperry (@paulsperry_) November 7, 2019

Adam Mill at AmGreat, As the Flynn Case Disintegrates, Parallels with Ukraine Emerge. After a long reprise of the problems with the FBI 302s used to accuse Flynn of lying to the FBI:


As in the Ukraine impeachment inquiry currently underway, the establishment became incensed by the incoming president using trusted advisors to conduct foreign policy instead of deferring to the permanent bureaucracy. In the Ukraine farce, the president outraged the foreign policy establishment by tapping his personal attorney, Rudy Giuliani. In the Flynn case, the FBI acted with outrage over the president using his future national security advisor instead of the foreign relations apparatus held over from the Obama Administration.

Both the Ukraine farce and the Flynn case involve the media and Trump’s political opponents criminalizing legitimate contacts with foreign leaders and activities the president was elected to handle. If they succeed in wresting control of foreign affairs from our elected leader, it will sever all such issues from the ballot box. While this might serve the interests of bureaucrats, it’s very bad for democracy. Van Grack and Adam Schiff are on the front lines of that effort.

"Spengler" (aka David Goldman) at PJ Media, It's Time for Every American Patriot to Rally Around Trump: The American Republic Is at Stake


For the record, I don't care whether there was quid pro quo with Ukraine or not. If President Trump used military aid as a bargaining chip to persuade the government of Ukraine to investigate foreign subversion of our political system, he was doing his job as commander-in-chief to protect this country from its external enemies. The parade of striped-pants cookie-pushers from the State Department feeding information to closed-door Democratic Party kangaroo courts in the House of Representatives is irrelevant. Trump is fighting a mutiny by the U.S. intelligence community. If the mutineers succeed, it will be the end of the republic. If a cabal of bureaucrats nestling in the bowls of our $80 billion a year intelligence bureaucracy can bring down an elected president of the United States, the republic is finished.

Remember this WH photo? Look at all those grim faces after Trump won.

And look! Who’s that I see? Why is Eric Ciaramella, the 145 lb, pajama wearing, whistleblower (aka Spy).

He should have been sent back to the CIA salt mines for this alone. Elizabeth Vaughn at Red State, Uh Oh! Schiff’s Staff Forgot To Redact Ciaramella’s Name From Bill Taylor’s Transcript. Did Schiff out him inadvertently? Tyler O'Neil at PJ Media, How Did the Alleged Ukraine Call Whistleblower End Up in the Mueller Report? By leaking secrets to the New York Times.


Eric Ciamarella, the CIA analyst identified as the likely whistleblower behind the Democrats' partisan impeachment inquiry, was cited in Special Counsel Robert Mueller's report on nonexistent collusion between Donald Trump and Russia. In fact, the Mueller report cites Ciaramella's May 2017 email summaries of a meeting between Trump and Russian officials — summaries leaked to a New York Times reporter. After citing Ciaramella's emails, the report quotes the Times story.

911?
Yes.
I’d like to report a murder.
Stay calm sir.
I am calm. Just shaken up. Wow.
What happened sir?@RandPaul just murdered the entire fake news and the hoax whistleblower in less than 60 seconds.
Sir - we’re sending someone right away.
Wowpic.twitter.com/FZ8eViVgnc
— Benny (@bennyjohnson) November 5, 2019

Capt. Ed again, Come On, The Whistleblower’s Identity Is Irrelevant, Says … Ivanka Trump? In a sense she's right. It's pretty much been busted already, despite the squealing of Democrats. But Elizabeth Vaughn again, If Ciaramella Is The Whistleblower, Democrats Have Made A Major Blunder And Their Credibility Will Evaporate


When the American people fully understand that Ciaramella submitted his complaint for the sole purpose of triggering an impeachment inquiry, and learn about his activities and close associations in D.C., the limited credibility the Democratic Party still retains will evaporate. Especially if the Durham investigation turns up criminal or merely unethical behavior on the part of Obama Administration officials.

Capt. Ed, Whistleblower Attorney: You’d Better Believe I Meant “Coup” … A Legal Coup, That Is. I guess there weren't enough characters in Twitter to add that. Dr. John at Flopping Aces wonders What if there was a coup to overthrow the President and the media didn’t cover it? Ace, "Look at This Character:" Trump Reads Coup-Plotter Mark Zaid's Tweets. Heh. He should retweet them, too.

It turns out the Eric's lawyers may have a thing for the ladies, pre-pubescent Disney Princesses,  Ace, SelenaGate: Maybe The Whistleblower Isn't the One Who Needs Anonymity

The whistle blower's attorney @MarkSZaidEsq has scrubbed the link from his website that went to his YouTube channel.

Here's the archive showing it was there: https://t.co/Gt3gxdvkXg


Lawyer Mark Zaid said his client, the impeachment whistleblower, would agree to answer written questions from Republicans rather than agreeing to the cross-examination they demand to find out who lit the impeachment fuse. A cloak of anonymity has been thrown over the whistleblower by Rep. Adam Schiff, who holds the impeachment dagger. Democrats pretend the whistleblower isn't important anymore because witnesses and a rough transcript of Trump's July 25 phone call with Ukraine's leader confirm his testimony.

But that's not entirely true. He claimed Trump made "a specific request that the Ukrainian leader locate and turn over servers used by the Democratic National Committee," but the transcript shows no such "specific request." The whistleblower also interpreted, rather than just reported, what Trump said, claiming he sought Ukrainian interference in the 2020 election. This is a plausible but not a necessary conclusion to draw from the words spoken. So the whistleblower indulged in anti-Trumpian spin. And we know he also discussed his complaint with Schiff's staff — colluded with them, so to speak — so answers from him in person would be more illuminating than written lawyerly evasions.

Insty, YOU WILL FAITHFULLY REPEAT THE PARTY LINE, COMRADE, HOWEVER IT MAY SHIFT IN RESPONSE TO THE NEEDS OF THE REVOLUTION: 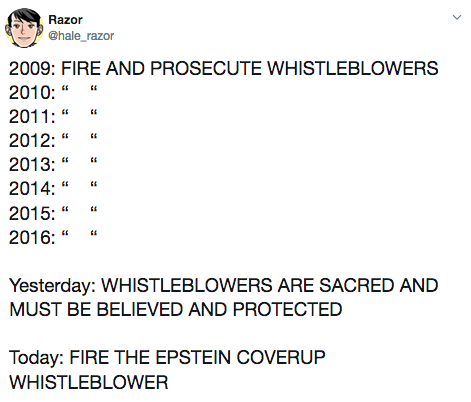 John Solomon, at his own site, Testimony bombshell: Obama administration tried to partner with Hunter Biden’s Ukrainian gas firm but was blocked over corruption concerns

George Kent, the former charge d’affair at the Kiev embassy, said in testimony released Thursday that the State Department’s main foreign aid agency, known as USAID, planned to co-sponsor a clean energy project with Burisma Holdings, the Ukrainian gas firm that employed Hunter Biden as a board member.

At the time of the proposed project, Burisma was under investigation in Ukraine for alleged corruption. Those cases were settled in late 2016 and early 2017. Burisma contested allegations of corruption but paid a penalty for tax issues.


Memos newly released through a Freedom of Information Act lawsuit filed by the Southeastern Legal Foundation on my behalf detail how State officials in June 2016 worked to prepare the new U.S. ambassador to Ukraine, Marie Yovanovitch, to handle a question about “Burisma and Hunter Biden.”

In multiple drafts of a question-and-answer memo prepared for Yovanovitch’s Senate confirmation hearing, the department’s Ukraine experts urged the incoming ambassador to stick to a simple answer.

“Do you have any comment on Hunter Biden, the Vice President’s son, serving on the board of Burisma, a major Ukrainian Gas Company?,” the draft Q&A asked.

The recommended answer for Yovanovitch: “For questions on Hunter Biden’s role in Burisma, I would refer you to Vice President Biden’s office.”

Ace, WSJ: Firm Hired by Burisma to Lobby for Them Tried to Use Hunter Biden as Leverage with the Obama/Biden Government. "You don't say."

AllahPundit at Hot Air, Lindsey Graham: Did Gordon “Sunderland” Change His Story About The Quid Pro Quo Because He’s In Cahoots With Adam Schiff? Allah not a fan of Lindsey's. He also cites the NYT to claim Ukraine Prez Was Two Days Away From Announcing New Biden Probe On CNN When Trump Handed Over The Military Aid. It could be true, but at this point why would you trust the NYT. As CR reminds us, Impeachment witness cites NYT as source for his understanding of Trump’s Ukraine motive

Tucker Carlson reports that it appears as though Obama's Ambassador to Ukraine, Marie Yovanovitch, perjured herself under oath, according to new email evidence pic.twitter.com/EBTh6GgXOZ
— Ryan Saavedra (@RealSaavedra) November 8, 2019

And more impeachment B.S. than you can shake at stick at:

Bolton willing to defy White House and testify if court clears the way, according to people familiar with his views

Poll: Would proof of a quid pro quo matter? Maybe not - Hot Air

We Shouldn't Impeach Trump On the Basis of Flawed Theory | Time

Trump Allies Want Joe Biden and Hunter Biden to Testify. Democrats Warn It Would Blow Up the Senate.

For Democrats, Power Isn't Everything — It's the Only Thing

WaPo: Bolton no-shows Schiff but willing to testify -- if a court rules against executive privilege
Posted by Fritz at 11:32 AM