Coming up with a unique title for this things is often the toughest part. . . .


Rondo and its French part-equivalent, rondeau, are words that have been used in music in a number of ways, most often in reference to a musical form but also to a character type that is distinct from the form.

Sundance at CTH reports another delay in the Flynn case, requested by both the defense and the offense, pending the publication of IG Horowitz' report: Interesting Development – DOJ Requests Delay in Flynn Case Until After Publication of IG Report… Hmm, somebody knows something ...


A curiously interesting development in the DOJ case against Michael Flynn. Judge Emmet Sullivan is weighing the merits of the Flynn defense Motion to Compel (MTC), which requests a significant amount of information on DOJ/FBI conduct in the lead-up to Flynn’s prosecution. A decision and court briefing was anticipated soon.

However, today the DOJ files a joint motion with the defense asking Judge Sullivan to suspend scheduled briefing dates and sentencing deadlines until after the DOJ inspector general report is published on December 9th. The implication is that some of the “Brady” material at issue; or tangential issues that touch upon the material; may be outlined in the upcoming IG report.

Also at WaPoo. From the Gateway Pundit,  BREAKING: FBI Lawyer Who Altered FISA Docs and His Lover Worked for Current ICIG Who Edited IC WhistleBlower Form to Legitimize Schiff Sham. Funny how connections between same small group keeps showing up. It's almost like a conspiracy, or something. David Goldman, aka Spengler, reviews Andy McCarthy's book. A National Nightmare: Andrew McCarthy Exposes the Plot Against the President, available here, with a little gratuity to me.

Margot Cleveland at Da Fed listens to Glenn Simpson so you don't have to, New Fusion GPS Info Confirms The Special Counsel Probe Was A Hit Job


Given that “one of the most knowledgeable experts on Russia in the world today” got these facts (and others) wrong, the question remains: Why? Was Steele pushing a disinformation campaign on behalf of Hillary Clinton in his dossier? Or was Steele “played” by the Russians, as Hill thought?

It’s hard to know. But you know who should have found out? Robert Mueller!

Yet, as I wrote shortly after the release of the special council’s report: “Even though Mueller was authorized, as he put it in the special counsel report, to investigate ‘the Russian government’s efforts to interfere in the 2016 presidential election,’ the report is silent of efforts to investigate Russia’s role in feeding Steele misinformation.”

However, investigating that would have led back to several members of the Mueller team (Weissman, Strzok, Clinesmith) and they couldn't have that. Althouse catches the New Yorker also pushing Steele Dossier truth theory despite all evidence that it was a manufactured political hit job in "Simpson and Fritsch acknowledge that several of Steele’s most sensational allegations remain unproven and that others were almost surely wrong... [but] 'a spy whose sources get it 70 percent right is considered to be one of the best'...". As usual the best is in the comments.

Jazz Shaw at Hot Air reports on SCOTUS Blocks House Subpoena Of Trump Financial Records. Should be an easy call since now, per Roberts, they're allowed to consider motives. Sundance, Supreme Court Maintains Stay Blocking House Democrats From Trump Taxes – Pending Writ of Certiorari…
There was more testimony in the House, this time from Mark Sandy, an OMB official, who according to WaPoo, reported Two OMB officials resigned in part over concerns about Ukraine aid hold, official testifies. Two down, ten thousand or so to go. All CNN got out of it was Trump administration officially put hold on Ukraine aid same day as Trump call. Apparently the transcript was held a while, Da Caller, Democrats Release More Transcripts Just As Thanksgiving Holiday Begins  Rep. Zeldin: Here’s Why ‘Adam in Wonderland’ Won’t Release Mark Sandy Transcript (Elizabeth Vaughn at Red State). At Da Wire, Impeachment Witness Deposition Reveals Why They Were Told To Hold Ukraine Aid Beth Bauman at Town Hall explains why Mark Sandy's Testimony Was Just Released and Shows Why Ukrainian Aid Was Held


Q: Okay. At any point in time, from the moment that you walked into the SCIF to anytime in history, has Mr. Duffey even provided to you a reason why the President wanted to place a hold on security assistance?

A: I recall in early September an email that attributed the hold to the President's concern about other countries not contributing more to Ukraine.

The transcript for OMB’s Mark Sandy was just released. The ONLY reason he was ever given why there was a hold on $ to Ukraine was “the President’s concern about other countries not contributing more to Ukraine.” NOT bribery. NOT quid pro quo or any other WACKY Schiff conspiracy!
— Lee Zeldin (@RepLeeZeldin) November 26, 2019

The Bidens don't get a free pass says Jeff Landry at WaEx. A pretty good Breitbart podcast on the corruption of the Biden family. It's long, but worth it.

Only Trump is questioning where the money is going and which families in the United States are benefiting.


In my digging for Schiff and Pelosi connections to Ukraine, I came across some interesting circumstantial evidence, which I’ll get to in a minute. All this searching is an attempt to answer the nagging question, “What kind of kickbacks or favors are Pelosi and Schiff (and others) getting from Ukrainian connections?” The evidence started to pile up so much that I need to present it in two parts. Here in Part 1 I’ll cover some of the circumstantial evidence surrounding Adam Schiff’s Ukrainian ties. In Part 2, I’ll look at some of Pelosi’s connections, and also some strong evidence of Democratic malfeasance regarding what’s been going on in Ukraine.


On Friday, liberal watchdog group American Overreach received 100 pages of State Department documents they had requested through a FOIA request. The documents show that President Trump’s personal attorney, Rudy Giuliani, had “multiple contacts” with Secretary of State Mike Pompeo, Rep. Devin Nunes, and others during his investigation of Ukrainian corruption, none of which is illegal. (Every American president has had their own version of Rudy Giuliani.)


Austin Evers, executive director of American Oversight, said the documents reveal “a clear paper trail from Rudy Giuliani to the Oval Office to Secretary Pompeo to facilitate Giuliani’s smear campaign against a U.S. ambassador.” The records indicate that “Pompeo talked with Giuliani on March 26 and March 29.

What the group fails to realize is that the documents include Giuliani’s interview notes which provide detailed accusations of corruption against the Bidens.” Giuliani had interviewed Victor Shokin, the Prosecutor General who was investigating Ukrainian natural gas company, Burisma Holdings in March 2016. Shokin was about to question Hunter Biden when former Vice President Joe Biden ordered then-Ukrainian President Petro Poroshenko to fire Shokin or he would hold back $1 billion in U.S. aid. Giuliani had also interviewed Yuriy Lutsenko, who had succeeded Shokin as Prosecutor General. The notes indicate that Lutsenko “believes Mr. Viktor Shokin the former Prosecutor General is honest.”

I discovered a pattern of corruption that the Washington press covered up for years!

I’m also going to bring out a massive pay-for-play scheme under the Obama Administration that will devastate the Democrat Party.

CNS News, Ukraine’s Ex-President Says He Never Spoke to Giuliani About Hunter Biden, Burisma, but we only believe Ukrainians who tell us something useful to the Democrat agenda, which goes along pretty well with this report from Yahoo! Trump Denies Sending Rudy Giuliani to Ukraine for Biden Probe, which is then interpreted by AllahPundit at Hot Air as Under The Bus: I Didn’t Direct Rudy’s Work In Ukraine, Trump Claims

But the latest hit on Nunes is much more than the mere peddling of fake news: It is the repeat of a pattern run by the left for the last three years. And it was the Giuliani tweet that revealed the play.

In his tweet, the former prosecutor spoke of corruption under the Obama administration and a “massive pay-for-play scheme” he had discovered. Giuliani then stressed he wasn’t about to be intimidated.

That closer resonated because the press and Democrats have been trying to intimidate Giuliani by casting him as a co-conspirator with Trump (and Nunes) in a plot to improperly obtain dirt on the Bidens. But if the most recent accusations against Nunes prove bogus—as the first set of ethics charges did—why should we credit a similar attack against Giuliani?

The answer is we shouldn’t. Rather, we should see the pattern underlying the attacks pushed by the media to Democrats’ benefit. That pattern is simple: taint Republicans investigating matters that threaten the left, either forcing them out of their leadership positions or using the manufactured scandal to breed public distrust in their conclusions. 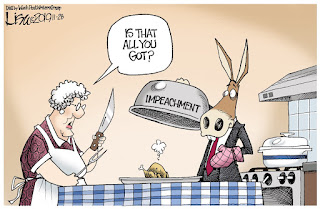 And too much impeachment garbage to go through, although I did try to impose some order on it:

Why the rush toward impeachment?

Democrats Haven’t Learned Anything From Past Impeachment Probes

As Trump cases arrive, Supreme Court’s desire to be seen as neutral arbiter will be tested

Democrats’ ‘bribery’ charge against Trump is a complete bust

Is John Roberts Up To a Senate Impeachment Trial? | The American Spectator

Bring Me The Head Of Donald Trump And The Killer Elite | The Camp Of The Saints
Posted by Fritz at 10:20 AM