At Last, A Non-Hoax Hate Crime 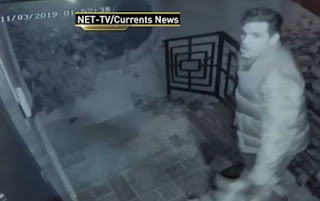 
A former professor at NYU has been arrested and charged with hate crime after he allegedly uprooted plants outside a Brooklyn church, throwing them at the door and damaging a $5,000 statue.
The whole incident was caught on security camera at Our Lady of Mt. Carmel in Williamsburg early Sunday. The church’s pastor, Monsignor Jamie Gigantiello, tells NBC New York that police told him 34-year-old Michael Gould Wartofsky was drunk when he vandalized the church’s property.
Wartofsky is seen on video with two other men, walking down 8th Street. He stopped in front of the church and started pulling plants from the garden, throwing it at the door but two other men didn’t participate, according to the church.
The ex-Sociology professor also yelled something at the security camera. He then dragged a heavy resin statue of St. Jude to the middle of the street, repeatedly kicking it and then leaving it there.
Gigantiello says he believes Wartofsky was making a statement. “This exhibition of violence, anger, and hatred is very disturbing. This is definitely an attack on the Catholic Church,” Gigantiello said.
Police charged Wartofsky with hate crime criminal mischief but no charges of public intoxication were filed.
An NYU spokesperson tells NBC New York that Wartofsky has no fall term assignment as an adjunct professor at NYU, and that he’s not currently an NYU employee. 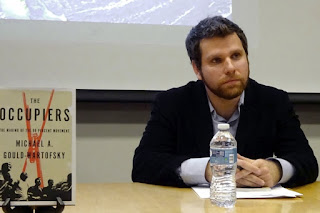 My guess — and it’s only a guess — is that (a) Gould-Wartofsky is gay and (b) he’s a trust-funder who wasn’t “currently” working at NYU because he doesn’t actually need to work for a living. As to guess (a), why else would a man be walking down a street drunk, with two other men, and feel such overwhelming animosity toward a Catholic church that he’d take vengeance on a statue of St. Jude?
. . .
As I say, these are only guesses, and if I’ve guessed wrong about Gould-Wartofsky — if he’s a working-class heterosexual — he would not have proper grounds for a libel suit, because you can’t sue for mere speculation, if it’s clearly labeled as such. But I don’t expect to get any cease-and-desist letters from Gould-Wartofsky’s attorneys, because if your client’s charged with a hate crime, it will keep you pretty busy.

I guess a Harvard degree ain't worth what it used to.
Posted by Fritz at 2:22 PM