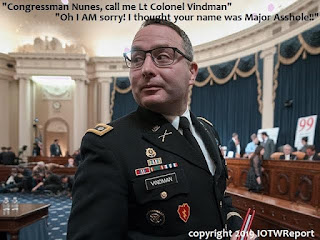 With the gavel about to fall on the Sondland testimony, let's review yesterdays news, featuring Major Asshole Lt. Col. Eric Vindman, as well as Kurt Volker, and

CR features 7 key moments from Alexander Vindman’s public impeachment testimony. As expected, Adam Schiff prevented him from doing anything outing the whistleblower, Adam Schiff Stops Witness From Testifying to 'Protect Whistleblower' He Says He Doesn't Know (Megan Fox, PJ Media); although as noted by someone, he might have slipped a little and started to refer to him as IG for the CIA. Sundance at CTH, Lt. Col. Alexander Vindman Outs Himself as Source for CIA Whistleblower Complaint (Video)….


Vindman testified earlier that he was very “busy” and wasn’t able to speak to his superior, Tim Morrison, and then subsequently didn’t because after he spoke to the NSC counsel he was told not to speak to others.

Wenstrup tried to follow up with Vindman, with Schiff interrupting, acting as though he was Vindman’s attorney at every point, not the objective arbiter he’s supposed to be. Wenstrup pointed out how Vindman didn’t follow the chain of command to report any concerns about the call.

But then when Wenstrup was questioning Morrison later in the day, Morrison testified that Vindman had actually spoken to him on the same day as the call, to speak about edits to the transcript of the call.

That’s a huge discrepancy in Vindman’s testimony. As Wenstrup indicates in his questioning of Morrison, it also calls into question Vindman’s claims that Trump demanded an investigation, because Vindman didn’t bring it up to Morrison or ask to include it as an edit in the transcript. And none of the other people support that claim.

Eric wasn't so good at chain of command...

Josh Hammer at NYPo, Alexander Vindman condemned himself in his impeachment testimony


But Vindman was unreliable and had questionable judgment, according to his own outgoing superior, Tim Morrison, the National Security Council’s senior director for European affairs.

In fact, Morrison viewed Vindman as so untrustworthy that he opted to exclude him from his conversations with William Taylor, the senior US diplomat in Ukraine.

The officer, who testified that he has never spoken directly with the president, nonetheless admitted to advising Zelensky as to how to comport himself in his communication with Trump. Vindman testified that he did not have time to express his concerns directly to Morrison, but he apparently found the time to express his concerns to both Deputy Assistant Secretary of State George Kent and an unnamed individual in the intelligence community.

As The Federalist’s Sean Davis noted, it is about as plausible an interpretation as any that the nation is now slogging through this imbroglio because Vindman opted to work in tandem with a Deep State whistleblower to jump-start impeachment proceedings over a disagreement with a phone call’s ethics.

Charlie Martin at PJ Media speculates Does Vindman Have a Ukraine Interest Beyond Foreign Policy?  . Some of that sweet sweet consulting money, like Hunter Biden? He's gonna need it. Ace,Oh: Mr. Bearclaw -- I'm Sorry, Lieutenant Colonel Bearclaw -- Admits That Ukraine Asked Him to... Be Their Defense Minister "Apparently the Ukranians had absolutely no questions about Vindman's national loyalties. They offered him one of the highest-ranking positions in government -- three times." AllahPundit at Hot Air, covers for Vindman, Ukrainian Official: I Was Joking When I Asked Vindman To Be Our Secretary Of Defense

For the guy who was the self-proclaimed White House advisor on Ukraine, Vindman's knowledge was not so encyclopedic:


Vindman isn’t saying he didn’t know anything about Burisma/Biden and the firing of Shokin until *recently*. He’s saying he STILL doesn’t know *anything* about them, despite being the so-called Ukraine expert on the NSC. He’s *deliberately* unaware & *deliberately* ill-informed 🤦🏻‍♂️ https://t.co/0KRwe9PoN0
— Lt. Col. Undercover Huber (@JohnWHuber) November 19, 2019


One occurrence during the testimony that has become a Rohrsach test for how you feel about Vindman is when he demanded Ranking Member Nunes address him by his full rank:


STEWART: You directed Rep. Nunes to refer to you as "Lieutenant Colonel?" Do you always insist on civilians referring to you by your military rank?

VINDMAN: People on Twitter were disrespecting me and my service.
— Sean Davis (@seanmdav) November 19, 2019 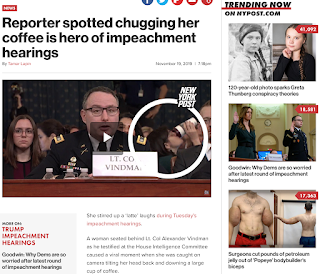 Althouse find a funny picture, A juxtaposition in the New York Post inspires me to think that we will survive. It was hard to stay awake through.


Lieutenant General Keith Kellogg, who is Vice President Mike Pence’s National Security Adviser, released a statement on Tuesday stating that he was on President Donald Trump’s July 25 phone call with Ukrainian President Volodymyr Zelensky and that he heard nothing wrong or improper on the call.
. . .
Kellogg wrote, “I was on the much-reported July 25 call between President Donald Trump and President Zelensky. As an exceedingly proud member of President Trump’s Administration and as a 34-year highly experienced combat veteran who retired with the rank of Lieutenant General in the Army, I heard nothing wrong or improper on the call. I had and have no concerns.”

So, really, it all comes down to a matter of opinion.

An interesting thread from Steve McIntyre, an interesting connection between George Kent and alleged whistleblower Eric Ciaramella. On Dec 9, 2015, exactly as Biden effort to link IMF $1 billion to Shokin removal was coalescing, Ciaramella met Daria Kaleniuk of the StateDept+Soros funded Anti-Corruption Action Center. Hmmm. WaEx, GOP senator says ‘something going on’ with whistleblower lawyer's anti-Trump history "Republican Sen. Ron Johnson of Wisconsin said past statements the whistleblower’s attorney made are evidence that the impeachment investigation against President Trump is a partisan attack." You don't say!

The Latest Thinking, President Trump is a Whistleblower -- and the So-Called "Whistleblower" is a Spy


As the transcript shows, President Trump was exposing alleged wrongdoing by former Vice President Biden, his son, Crowdstrike and former Secretary of State Hillary Clinton involving corruption in the Ukraine and USA that merited investigation.

Which makes President Trump a real whistleblower -- and the so-called "Whistleblower," nothing but a spy.