“We, the undersigned, respectfully request that the President of the United States grant a full and unconditional pardon to Roger Jason Stone Jr,” reads an official White House petition — which has now generated nearly 5,000 signatures.

It’s unclear who started the petition, with the creator only identified as “J.V.”

If the petition gets 100,000 signatures within 30 days, the White House will be forced to respond, according to the government’s official petition website.

Did Roger Stone just get convicted of lying and witness tampering to spare the President of the United States from the impact of a witch hunt?

I'd bet on this one. #PardonRogerStone
— Scott Adams (@ScottAdamsSays) November 16, 2019

In a sane political environment, the media would be deeply embarrassed by this Stone verdict: seeing as it flatly undermines the Trump/Russia conspiracy once and for all. Instead they’re celebrating, as if their years of horrible conduct has been vindicated. It’s truly demented
— Michael Tracey (@mtracey) November 15, 2019

I would be OK with a Stone pardon. Now John Brennan, that's another story GP, Brennan Sends President Trump Ominous Warning in the Middle of Schiff’s Impeachment Show Trial, ‘May Your Downfall be Swift’.

A generalization from "Bonchie" at Red State, Andrew Napolitano Has Been Wrong About Basically Everything.  Much like Paul Krugmann; always wrong, never in doubt.


State Department Assistant Secretary Victoria Nuland worked with U.S. Ambassador to Ukraine Geoffrey Pyatt in late 2015 to create a plan to force the firing of Ukrainian Prosecutor General Viktor Shokin, according to Kent. Nuland was also among a network of Obama administration officials involved in the distribution and recirculation of the infamous Steele dossier, the document used by the FBI to secure a maximally intrusive spy warrant to surveil a Trump-campaign associate.

“My understanding is that the conversations that were near-daily between Ambassador Pyatt and Toria Nuland regarding what to do on the way forward then included pitching the office of the Vice President to push President Poroshenko to remove Shokin,” Kent told lawmakers on Oct. 15.

They weren't pissed that he was a corrupt prosecutor; they were pissed he was prosecuting the wrong corruption; that involving children of American politicos. From Dan Sobieski at AmThink,Time to Subpoena Alexandra Chalupa


Now we find out, thanks to Tom Fitton and Judicial Watch that DNC contractor Alexandra Chalupa, who worked with Hillary Clinton to get Ukraine dirt on Trump, visited the Obama White House 27 times and even had meetings with the alleged Ukraine whistleblower whose name dare not be spoken, Eric Ciaramella.

This is the whistleblower coached by Adam Schiff and who colluded with him, a deep-state CIA agent whom we are told might wet his pants out of fear if his identity was publicly acknowledged. Ironically, as I noted recently, in a major goof-up, Schiff forgot to redact Ciaramella’s name in a posted PDF of the transcript of Ambassador Bill Taylor’s testimony.

As Judical Watch notes in its recent press release:


Judicial Watch announced today analysis of Obama-era White House visitor logs that detail meetings of controversial CIA employee Eric Ciaramella, who had been assigned to the White House. Ciaramella reportedly was detailed to the Obama White House in 2015 and returned to the CIA during the Trump administration in 2017. The logs also reveal Alexandra Chalupa, a contractor hired by the DNC during the 2016 election who coordinated with Ukrainians to investigate President Trump and his former campaign manager Paul Manafort, visited the White House 27 times.

Judicial Watch noted that White House visitor logs revealed a number of individuals met with Eric Ciaramella while he was detailed to the Obama White House. A few examples paint a picture of WH involvement . . .

One question I'd like to have seen asked: "If Ukraine's new president distrusts U.S. Ambassador-- rightly or wrongly-- should that person stay in the position? Or for the good of the US, should she be replaced with someone who can have a productive relationship?" #Diplomacy101
— Sharyl Attkisson🕵️‍♂️ (@SharylAttkisson) November 16, 2019

Ace, Hannity: I Predict "Masha" Yavonovich will "Cry on Cue" In Order to Give the Impeachment Some Soap Opera Drama - Day Two of Impeachment: Masha Yavonovich Cries on Cue, as Predicted


Devin Nunes actually brought a box of Kleenex tissues and had them positioned right to his front right in the hearings. I saw speculation that his plan was to gallantly offer Masha a tissue the moment she turned on the Made for TV waterworks.

This wasn't merely a prediction -- Free Beacon reported that Democrats really wanted "Masha" there to testify not because she had facts relevant to impeachment (she admitted that she knew nothing about the phone calls or aid hold-up) but only because she cried like a little girl in her deposition, and Reality TV producer Adam Schiff thought she'd make a good cast member for his show.

Tristan Justice at Da Fed, Marie Yovanovitch Admits There Was No Crime, No Bribery From Trump On Ukraine.  Dr. John at Flopping Aces, These are the three yuge stories out of yesterday’s Yovanovitch tear jerker and a star is born


One - Yovanovitch is forced by Chris Stewart to admit she knows nothing of any Trump crimes . . .

Two - She disclosed that the obama administration knew about the corruption Hunter Biden was engaging in and they prepped Yovanovitch for that. . .

Three - The investigation into Burisma corruption was not closed as Biden and democrats have been falsely asserting . . .

Of course, the real heroine of the Yovanovich hearing (from the right) and the villainess  from the left's perspective was Elise Stefanik. Althouse, WaPo acknowledges the rise of a new GOP star: "Elise Stefanik emerges in impeachment hearings as key Trump defender — and GOP celebrity."


The piece — by Mike DeBonis — begins with Stefanik's record as a "maverick" — voting against the 2017 tax bill and supporting LGBT rights and DACA. But at the impeachment hearings, we're told she's "a complete team player."

Ace, To the Democrats Marie, Not Elise, was yesterday's star. NYT via Hot Air, Elise Stefanik Emerges In Hearings As Key Trump Defender — And GOP Celebrity, which is not a good thing from their point of view.


“I think everything they did today was strategy,” said Rep. Val Demings (D-Fla.), one of three Democratic women on the committee. “She’s one of the newer members on the committee, and she’s a woman. . . . When they are badgering a female witness who is a career Foreign Service officer with an impeccable record, and they want to badger her, I think it’s a better look when a woman is taking the lead on that.”

Sundance, After Rep. Elise Stefanik Highlights Ambassador Yovanovitch False Statement – Stefanik Becomes a Target…. You know you're over the target when you're taking flak.

Reuters reports Support for Trump's impeachment unchanged after hearings begin. Only partisans are tuned in, and their opinions are pretty well fixed. 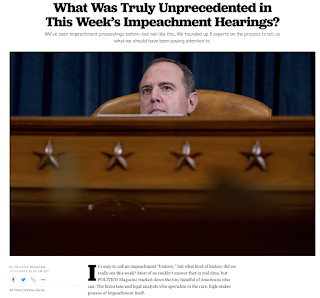 Althouse, Politico chooses a head-on-a-platter photograph of Adam Schiff... ... for its "What Was Truly Unprecedented in This Week’s Impeachment Hearings?" article:

To hide his skinny neck? It's a good look on him.


We can start in 2013, in the Maidan, Kiev's central square, where demonstrators gathered to protest the decision by Ukraine's President, Viktor Yanukovych, to shift away from more integration with the European Union and instead accept a Russian bailout. The US foreign policy apparatus was clearly rooting for the protesters — and why not? They were the defenders (for the most part) of Euro-style civil society and human rights. Yanukovych was corrupt and pro-Russian. Who wouldn't want “Euromaidan” to prevail?

Senator John McCain soon showed up at the Maidan and gave a rousing speech. Our ambassador, Victoria Nuland, passed out cookies to the demonstraters (and plotted behind the scenes on the makeup of a post-Yanukovych government). Eventually, the protesters did win — in February 2014 when the police pulled back and Yanukovych fled Kiev. He was replaced in a parliamentary vote that was nevertheless short of what was required under the Ukraine constitution to impeach him. The parliament cited "circumstances of extreme urgency.” This was Ukraine's "Revolution of Dignity."

All in all, a triumph for the U.S. foreign policy bureaucracy (if you don't count Russia's reaction — invading Eastern Ukraine). But it had an unattractive anti-democratic aspect.  The Maidan protesters were not elected, after all. The president they took down was elected, to a term that ran into 2015. The protesters represented an appealingly Westernized urban constituency, yet — maybe I'm out of my depth here! — that didn't mean they were a majority. Ukraine is a big country.

But, within the foreign policy (“interagency”) world, these annoying thoughts could be safely buried. It's not the job of the State Department to observe every jot and tittle of another country's election laws. It's the job of the State Department to pursue U.S. interests. If that also involves meddling in another country's politics to a degree that would send Robert Mueller into permanent state of shock if Russia did it to us -- well, welcome to the world. . .

DiGENOVA: An "Impeachment" Constructed of Lies


House Intelligence Committee Chairman Adam Schiff (D-Calif.) has been trying to overturn the 2016 election from day one, and he isn’t about to let something as trivial as the truth get in his way.

Schiff has pursued that aim relentlessly for the past three years, jumping from one conspiracy theory to another—from Russia to Ukraine, from tax returns to absurd “dossiers,” from Robert Mueller to Michael Avenatti, and back again. All the while, he has revealed his naked partisan motivations and portrayed himself as some kind of defender of truth.

In reality, everything about Schiff’s still-fruitless crusade against our duly-elected president is built on lies. The dishonesty runs back to the very beginning of the Trump presidency. Just one month after Inauguration Day, for instance, Schiff was gleefully reading juicy tidbits from the blatantly fraudulent Steele dossier into the Congressional Record . . .