Russiagate - FBI, "Sorry About That, Chief!"

I don't know how big this is, but it seems kind of hinky. In the Flynn sentencing matter, the FBI has justadmitted to confusing the authorship of the statements of the two agents who interviewed Flynn, Strzok, and presumably Pientka, the results of the which interview were used to charge Flynn with perjury. Rather embarrassing at minimum. If I were the judge, I'd just toss the whole thing. Sundance at CTH, DOJ Makes Jaw-Dropping Admission in Flynn Case – Prosecution “Mistakenly” Attributed Wrong Notes to Wrong FBI Agents….


Prosecutor Brandon Van Grack sends a letter to Flynn’s defense team today containing a stunning, almost impossible to comprehend, admission of a mistake central to the claims of the prosecution. In March 2018 the FBI presented notes taken by agents Pientka and Strzok, now they say they made a ‘mistake’.

For almost two years the DOJ misidentified, misattributed, and never corrected that the authors of the Flynn interview notes were actually reversed. All of the notes attributed to FBI Agent Peter Strzok actually were taken by FBI Agent Joseph Pientka, and vice-versa:
. . .
The entire FBI case against Flynn; meaning the central element that he lied to FBI investigators (he didn’t); is predicated on the FD-302 interview reports generated by the two FBI agents; later discovered to have been edited, shaped and approved by Andrew McCabe…. And for almost two years the entire outline of their documented evidence has been misattributed?

C’mon man. This is sketchy as heck.

Obviously what triggered this re-review of the notes was a smart sur-surreply from the defense that highlighted how Peter Strzoks notes were far too neat, organized and well constructed to have been written during an actual interview. [SEE HERE]


Here’s me, acknowledging my mistake. I was dead wrong. It now seems there was a concerted effort, though isolated, within the upper-echelons of the FBI to influence the outcome of the Flynn investigation. By “dirtying up” Flynn, Comey’s FBI headquarters team of callow sycophants shortcut the investigative process. Arm-twisting Flynn through the “tweaked” version of his interview afforded him criminal exposure. The cocksure Comey team felt supremely confident that would inspire him “flipping” and give them the desperately sought-after evidence of Trump-Russia collusion that the wholly unverified Steele dossier was never remotely capable of providing.

I am physically nauseous as I type these words. I have long maintained that innocent mistakes were made and that the investigators at the center of this maelstrom were entitled to the benefit of the doubt. No more.

They have tarnished the badge and forever stained an agency that deserved so much better from them. I am ashamed. The irreparable damage Comey’s team has done to the FBI will take a generation to reverse.


Texts, emails, and documents released over the past three years showed that whenever the small group wanted to leak they preferred: Devlin Barrett, Robert Costa and Matt Zapotosky at the Washington Post. [Example – source, pg 5]

So when we see Barrett, Costa and Zapotosky getting the gang back together to write about the upcoming IG report, it is worth reviewing their carefully engineered narrative. [All emphasis mine]


(Via Washington Post) Justice Department officials are trying to release in the coming weeks a potentially explosive inspector general report about the FBI’s investigation into President Trump’s 2016 campaign, according to multiple people familiar with the effort. . . .

This is specifically Comey, McCabe, Baker, Strzok, Page, Yates, Rosenstein and McCord speaking to the Washington Post. Those officials would likely be recipients of the report specific to their conduct. Apparently the principal review has not taken place.

A couple more from sundance, Jim Jordan Discusses Possibility of Interim Move To Intelligence Committee… , and Lengthy Interview – Lee Smith: From Spygate to Impeachment “The Plot Against The President”… (videos). A great interview; I was expecting something more inflammatory.

And onto the "whistleblowers." From RCP, Sen. Rand Paul Corrects Reporter: It Is Not Illegal For Media To Name The Whistleblower, of course not, but to do so would hurt their preferred narrative. From Fox, Rand Paul doubles down on call for whistleblower to come forward, slams Hunter Biden.

At Monday's rally, Paul also slammed Hunter Biden for obtaining lucrative roles with companies despite having no relevant expertise while his father, as senator and vice president, pushed legislation affecting those companies. The senator continued to focus on Biden Tuesday, saying that that it was unfair President Trump was being investigated and the Bidens were not.

Paul also put forth that he believed the whistleblower was "a material witness to the potential Biden corruption."

"He was there under Joe Biden. He was there when Joe Biden was trying to fire the prosecutor... that was investigating Hunter Biden," Paul claimed. "So this person was a Ukrainian expert on the desk at that time. I think he should be interviewed not as the whistleblower, but as a material witness to the Biden corruption in Ukraine."

Breitbart, Rand Paul Says He Will Probably Disclose Whistleblower’s Name, Calls Him a ‘Material Witness’. Teach at Pirate's Cove, Rand Paul Invokes Constitution On Revealing “Whistleblower’s” Name. Alhouse,"But what if the WB is a vehement Ukraine hawk, with strong ties to Joe Biden and Democrats?"


Writes Mickey Kaus, explaining why the identity of whistleblower is important even though we have the transcript:


The point wouldn’t be that the whole thing then smells like a long-hatched anti-Trump conspiracy (though it does)....
The point is that seemingly everyone in the WB’s network of outrage, from the person who told the WB about the call to Col. Vindman (the National Security Council Ukraine expert who’s testified before Rep. Schiff’s impeachment panel) to Ambassador William Taylor (who’d written a text calling it “crazy” to hold-up aid to Ukraine “for help in a political campaign”) to the aide in Schiff’s office consulted by the WB may be sincerely, passionately inflating the importance of Trump's sin--and deflating Biden's-- because to them aiding Ukraine is wildly important and Joe Biden is a compatriot, mentor or hero.

MOTUS, You’re Gonna Need a Better Whistleblower. But as you might expect, the never-Trumpers at Da Bulwark side with the Democrats, The Real Witch Hunt: Going After the Whistleblower.

From sundance, Volker and Sondland Testimony Released – And Elise Stefanik, Once Again, On the Right Trail…


The transcripts of the closed-door deposition of Kurt Volker and Gordon Sondland were released today by the Lawfare impeachment organizers and Adam Schiff. Both pdf’s are below; however, first it is worth reestablishing a bigger, more important, context.
. . .
….And the most interesting aspect to all of this is the only person (besides us) who appears to recognize the bigger, much bigger, big picture; is the same person who questioned FBI Director James Comey on March 20th 2017 when no-one had a clue about the scale and scope of their operations. WATCH:


The Volker and Sondland testimony appears to be a Rorschach test. Everyone seems to hear in it what they expected to. Breitbart, Volker Denies Quid Pro Quo in Testimony Transcripts: ‘No Leverage Implied’ “I didn’t think” a quid pro quo “was actually there,” Volker, the first impeachment inquiry witness, testified, referring to the call. Chuck Ross at Da Caller, House Democrats Release Transcripts Of Kurt Volker And Gordon Sondland Depositions


Sonland, a major GOP donor who was appointed ambassador in 2018, testified that he was uncertain about whether Trump sought a quid pro quo from Zelensky. He said that during a Sept. 8 phone call, Trump told him he wanted “nothing” — “I want no quid pro quo” — from Zelensky.
“I want Zelensky to do the right thing,” Sondland recalled Trump saying.

Sondland submitted supplemental testimony Monday in which he said he came to suspect by early September that the Trump administration was withholding military aid to Ukraine in order to pressure Zelensky. That was largely because he could not get answers about why the nearly $400 million aid package was being withheld, he said.

“By the beginning of September 2019, and in the absence of any credible explanation for the suspension of aid, I presumed that the aid suspension had become linked to the proposed anti-corruption statements,” said Sondland.

And in a major correction to his initial testimony, Sondland said in his supplemental filing that he told one of Zelensky’s advisers during a meeting in Warsaw that the “resumption of U.S. aid would likely not occur until Ukraine provided the public anti-corruption statement that we had been discussing for many weeks.”

He presumed, but he didn't know. Which, in the words of the AP becomes Impeachment reversal: Diplomat now acknowledges quid pro quo. Roll Call, ‘The Giuliani problem’ and other takeaways from diplomats’ impeachment testimony

Rep. Gaetz: Impeachment ‘Is the Cop-Out for the Lack of an Agenda’ | CNSNews

Trump: 'No reason to call witnesses' in impeachment probe | TheHill

Impeachment Lawyer: Adam Schiff and Nancy Pelosi are On 'Path to Disaster' With Current Impeachment Process 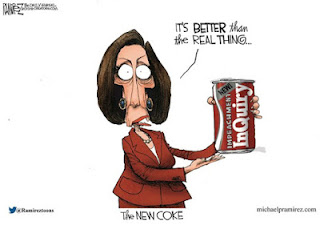 Most Republicans on impeachment committees aren’t showing up, transcripts reveal

Trump could get whacked by legal losses in coming months - POLITICO

Who Can Stop Trump Now?

Graham: If Trump's Offense Is Impeachable, 'You Won't Have Any Presidents Left' | CNSNews