Whew, boy, did the stuff ever build up while I was out fishing! OK, let's start with what I now categorize as "Russiagate" proper, the original conspiracy to block Trump's election and subsequently to take out President Trump using the hoked up charge of collusion with the Ruskies. First, we go to The Last Tradition, who posts Judical Watch's latest findings, Judicial Watch Obtains Records Showing Contact Between Peter Strzok, Bruce Ohr That DOJ Claimed It Couldn't Find

And Michael Flynn's lawyer, Sidney Powell files a reply to DOJ's attempt to pooh pooh her recent filing regarding how Flynn was railroaded with invented crimes. Adam Mill at AmGreat, New Filing in Flynn Prosecution Casts Further Doubt on the Government’s Case. Much more, as usual by sundance at CTH, Reconstructing Justice – Flynn Defense Submits Outstanding Sur-Surreply to Counter Prosecution….

Apparently, according to DOJ,there was a nanosecond between the govt charging Flynn, and his guilty plea during which his previous defense was entitled to file for any exonerating material.Also from sundance,  Why John Brennan, Peter Strzok and DOJ Needed Julian Assange Arrested – And Why UK Officials Obliged…


The predicate for Robert Mueller’s investigation was specifically due to Russian interference in the 2016 election. The fulcrum for this Russia interference claim is the intelligence community assessment; and the only factual evidence claimed within the ICA is that Russia hacked the DNC servers; a claim only made possible by relying on forensic computer analysis from Crowdstrike, a DNC contractor.

Julian Assange is the only person with direct knowledge of how Wikileaks gained custody of the DNC emails; and Assange has claimed he has evidence it was not from a hack.


The Federalist has learned that the now-outed CIA and FBI informant Stefan Halper served as a source for Washington Post reporter David Ignatius, providing more evidence that the intelligence community has co-opted the press to push anti-Trump conspiracy theories. In addition, an email recently obtained by The Federalist from the MI5-connected Christopher Andrew bragging that his long-time friend Ignatius has the “‘inside track’ on Flynn” adds further confirmation of this conclusion.

Svetlana Lokhova, the Russian-born English citizen and Soviet-era scholar, told The Federalist that she only realized the significance of her communications with and about Ignatius following the filing of attorney Sidney Powell’s reply brief in the Michael Flynn case.

Jim Geraghty at NR gives John Durham glowing reviews in The Last Trusted Prosecutor in Washington, and a book review from AmThink, Lee Smith's Book Will Make Patriots' Blood Boil. At NyPo, Maria Butina blames ‘racism against Russians’ for her legal problems. I think she got a bad deal, but that's not why.

Onto the various misnamed "whistleblowers". From Nice Deb at AmGreat, Retired Army Officer Remembers Lt. Col. Vindman as Partisan Democrat Who Ridiculed America, Ace, Officer Who Served with Vindman Says Vindman Is a Partisan Globalist Democrat Who Would Casually Ridicule Americans as "Rednecks" to His Russian Counterparts. But guess which officer the MSM will choose to honor, and which to ridicule?


In an eye-opening thread on Twitter last week, retired U.S. Army Lt. Colonel Jim Hickman said that he “verbally reprimanded” Vindman after he heard some of his derisive remarks for himself. “Do not let the uniform fool you,” Hickman wrote. “He is a political activist in uniform.”

Hickman’s former boss at the Joint Multinational Simulation Center in Grafenwoehr has since gone on the record to corroborate his story. Hickman, 52, says he’s a disabled wounded warrior who served in Iraq and Afghanistan and who received numerous medals, including the Purple Heart.

The retired officer said that Vindman, a naturalized U.S. citizen born in Ukraine, made fun of the United States to the point that it made other soldiers “uncomfortable.” For example, Hickman told American Greatness that he heard Vindman call Americans “rednecks”—a word that needed to be translated for the Russians. He said they all had a big laugh at America’s expense. 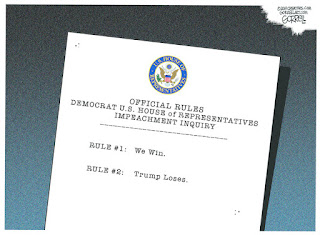 Via Town Hall, House Minority Leader Kevin McCarthy Has These Questions For Shifty Schiff About The Ukrainian Whistleblower. How much did you coordinate with Adam Schiff and his staff? Referring, of course, to the original, still nominally anonymous whistleblower, widely believed to be CIA "analyst" Eric Ciaramella. Gateway Pundit claims knowledge of Why Corrupt FBI Actors Strzok and Page Referred to Schiff’s Suspected ‘Whistleblower’ Eric Ciaramella as ‘Charlie’. Has he been in the conspiracy from the beginning? Looks like it. From Chuck Ross at Da Caller, Whistleblower Is Willing To Submit Written Answers To House Republicans, Lawyer Says. That's mighty white of him. Althouse, "Well, I’ll tell you what. There have been stories written about a certain individual, a male, and they say he’s the whistleblower."


"If he’s the whistleblower, he has no credibility because he’s a Brennan guy, he’s a Susan Rice guy, he’s an Obama guy. And he hates Trump. And he’s a radical. Now, maybe it’s not him. But if it’s him, you guys ought to release the information."

I'm beginning to think Adam Schiff was duped by Brennan loyalist Eric Ciaramella. He was promised a quid pro quo--then Trump released the transcript. They got nothing. Now Schiff is left holding the bag on the dumbest hoax since Jussie Smollett mugged himself w a Subway Sandwich.
— thebradfordfile™ (@thebradfordfile) November 4, 2019 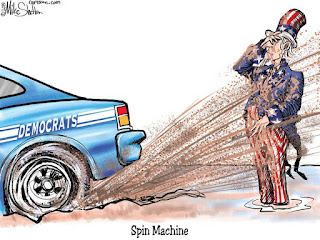 And how could we go a day without more goodies from Joe Biden and Ukraine? A big one as John Solomon reports Hunter Biden’s Ukraine gas firm pressed Obama administration to end corruption allegations, memos show, and then, of course, Hunter's dad threatened to withhold billions in aid to Ukraine. Just a coinkydink, I'm sure. Sundance is all over it with Biden Lied – Emails Show Burisma Executives Leveraging Hunter Biden Membership as Pressure on U.S. State Dept. For Assistance in Removing Ukraine Corruption Probe…. Althouse goes to Scott Adams, "How would it be possible for a Ukraine investigation into Biden to be good for Trump politically unless it was also the kind of thing that voters in the United States would care about?"


"There were two potential outcomes of the requested Ukraine investigation on Biden. Either they would find nothing, or they would find behavior that voters in the United States need to know. Which of those two outcomes is the impeachable one?"

The WaPoo continues to whine about the treatment of their deep state allies in Former ambassador testifies she felt threatened by Trump’s comments about her, while sundance counters The Bloom is Off The Ruse – Marie Yovanovitch Transcript a Case Study in Narrative Construction…. More from sundance, Ukraine, Kerry and Quid-Pro-Joe: Steve Hilton -vs- Marie Harf

Chuck Ross, Da Caller, Giuliani Associate Will Cooperate With Democrats’ Impeachment Inquiry, and through Hot Air, NYT whines that Republicans Try New Response To Ukraine Call: Quid Pro Quo Isn’t Impeachable. Assuming the worst, that Trump thought Biden was guilty of corruption in Ukraine, and demanded an investigation as a price for aid (not in evidence yet), is this worse than Obama seeking to damage and oust Trump using the CIA, FBI, DoJ and State Dept? 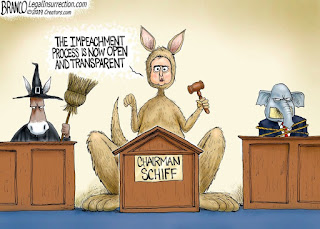 A bunch of unsorted impeachment follies:

Poll: 59% Say Trump's Interactions with Ukraine Neither Illegal Nor Wrong

Donald Trump Versus ‘The Interagency Consensus’

Chuck Todd: We asked voters about impeachment ... because we had to

Trump's True Crime: He Made People Laugh at Congress | RealClearPolitics

Short: Democrats Doing Everything to Hand House Back to GOP in 2020

Impeachment Drama Is Fraught with Traps for Sane Observers – American Greatness
Posted by Fritz at 10:44 AM