Russiagate: I Got Those Old Ukrainian Blues


First of all, why did Sondland change his original testimony?

Sondland, who refused to acknowledge the purported quid pro quo in his initial testimony, said he had “refreshed [his] recollection” after reading testimony by top diplomat William Taylor and Timothy Morrison, the senior director for Europe and Russia at the National Security Council. The ambassador then went on to revise parts of his own testimony to reflect his delivery of the quid pro quo message.

Sondland agreed with investigators that a Trump-Zelensky meet would be conditioned on a commitment to investigations into the Bidens and 2016 election interference.

“If you mean that those conditions would have to be complied with prior to getting a meeting, that was my understanding,” Sondland said.

Nothing bizarre about that, right? But I digress. The media and Democrats see this as proof of a quid pro quo. But is it? What about Sondland’s testimony? According to his testimony, when he asked Trump what he wanted from Ukraine, Trump said, “I want nothing. I want no quid pro quo. I want Zelensky to do the right thing... to do what he ran on.”
. . .
Also released today were transcripts of the testimony of Ambassador Kurt Volker, special envoy to Ukraine. According to his testimony, there was “no linkage” between a White House meeting with Trump and Zelenksy and any promises to hold any investigations.

Now let's go back to Sondland. Despite media reports, it's clear from Sondland's revised testimony that he didn't know why the military aid was being held up and that the link between the aid and the investigations is an assumption.

The narrative being pushed by the media and the Democrats that Sondland said there was a quid pro quo is not based on evidence but on an assumption by Sondland.

Axios, Top diplomat (Bill Taylor) testifies Ukraine quid pro quo was his "clear understanding", but, from Da Fed, Testimony Transcript Shows William Taylor Never Talked To Trump, Wasn’t Even On July 25 Phone Call. So where did he get his "clear understanding"? Why, the New York Times, of course! Breitbart, Bill Taylor Cites NYT as Sole Source for His Claim Trump Wanted Ukraine to Launch Probe to Get Dirt on Biden


Zeldin: What was the goal of requesting investigations into 2016 election and [Ukrainian company that employed Hunter] Burisma?

Taylor: As I understand it from one of the maybe the article in the New York Times about [Trump’s private lawyer] Mr. [Rudy] Giuliani’s interest in Burisma, in that article, he describes, and I think he quotes Giuliani at some length, that article indicates that Giuliani was interested in getting some information on Vice President Biden that would be useful to Mr.Giuliani’s client. I think that’s what he says. He says he’s got one client, and he’s useful to the client.

Zeldin: And then it’s your inference that Mr. Giuliani’s goal would be the President’s goal?
Taylor: Yes.

Zeldin: And your source is the New York Times?

Zeldin: So do you have any other source that the President’s goal in making this request was anything other than the New York Times?

Taylor: I have not talked to the president. I have no other information from what the President was thinking.

So now the self licking ice cream called the  NYT will cite Taylor as a source for the President's thinking. Capt. Ed, Trump To Volker: Hey, Thanks For The Quid-Pro-Quo-Less Testimony!

Thank you to Kurt Volker, U.S. Envoy to Ukraine, who said in his Congressional Testimony, just released, “You asked what conversations did I have about that quid pro quo, et cetra. NONE, because I didn’t know there was a quid pro quo.” Witch Hunt!
— Donald J. Trump (@realDonaldTrump) November 6, 2019

Rushbo, What Democrats Are Trying to Do with Ukraine Testimony Releases They are attempting to criminalize Trump carrying out a foreign policy they don't like.


I want to tell you upfront: There’s nothing in these transcripts, and, if you read them carefully — which most people are not gonna do — they’re gonna read Schiff’s summary more than anything. But what’s gonna happen is, you’re gonna find out that the only thing wrong here… You’re gonna see a word that is used commonly by all the people that testified who are anti-Trump. You’re gonna see the word “interagency,” and it will be used in such fashion as this: “The interagency group was highly alarmed at the way this was done and at the way it took place outside the interagency group.”

What that means is that Trump decided to conduct his own foreign policy without involving these elites at the State Department or at the National Security Council. He decided to do it on his own, ’cause he doesn’t know who he can trust in there, as this is demonstrating. But they’re trying to present it as a crime, that Trump did not go through the interagency group. The interagency group would be the National Security Council, the intelligence communities, maybe some military people. Everybody involved in the, quote-unquote, “national security complex.” That’s the interagency group.

That would be the NSC, the CIA, the DIA, the NSA, all these abbreviations. And he’s president. Like they’re trying to say Rudy Giuliani was dispatched as a rogue ambassador for Trump. He’s not rogue. Donald Trump can have anybody he wants go out and do foreign policy. In fact, Donald Trump’s doing exactly what you elected him to do. He’s avoiding the swamp. The swamp is filled with saboteurs, as this is demonstrating.

At Breitbart,  Republicans Debating Whether to Call the Bidens as Witnesses in Impeachment Trial. Hey, if they have nothing to hide, why not, right?

CHECKMATE: Newt Gingrich calls on Adam Schiff to put up or shut up under OATH during impeachment investigation – twitchy.com


Ace of Spades HQ Devin Nunes: The GOP Will Call Adam Schiff as Its First Witness at "Impeachment" Hearings 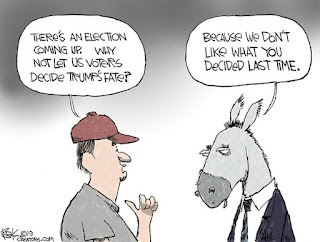 Adam Schiff Was Operating at His Usual Level of Veracity in New Op-ed: A Strong Rebuttal

Trump To Hire A Foreign Agent, From Firm Linked To Previous Case Of Alleged Giuliani Meddling, To Advise On Impeachment | The Daily Caller

UPDATE: The Wombat is back in business, with Rule Five Sunday: Black Widow and FMJRA 2.0: The Things That We’ve Learnt Are No Longer Enough