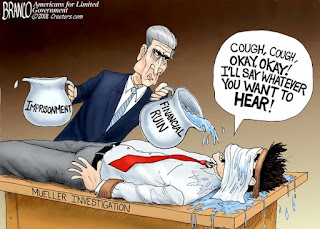 Paul Sperry at RCI:  For Trump, Cohen Plea Deal's Beginning to Look a Lot Like Exoneration. Althouse does a mahvelous job of extracting the important points:

On page 7 of the statement of criminal information filed against Cohen, which is separate from but related to the plea agreement, Mueller mentions that Cohen tried to email Russian President Vladimir Putin’s office on Jan. 14, 2016, and again on Jan. 16, 2016. But Mueller, who personally signed the document, omitted the fact that Cohen did not have any direct points of contact at the Kremlin, and had resorted to sending the emails to a general press mailbox. Sources who have seen these additional emails point out that this omitted information undercuts the idea of a “back channel” and thus the special counsel's collusion case.

Page 2 of the same criminal information document holds additional exculpatory evidence for Trump, sources say. It quotes an August 2017 letter from Cohen to the Senate intelligence committee in which he states that Trump “was never in contact with anyone about this [Moscow Project] proposal other than me.” This section of Cohen’s written testimony, unlike other parts, is not disputed as false by Mueller, which sources say means prosecutors have tested its veracity through corroborating sources and found it to be accurate.....

Notably absent from the criminal-information document is any corroboration of the highly inflammatory, though oft-cited allegation made in the so-called Steele dossier, funded by the Clinton campaign, that Cohen visited Prague to clandestinely meet with Kremlin officials in August 2016 to arrange “deniable cash payments to hackers who had worked in Europe under Kremlin direction against the Clinton campaign.”

Via Wombat-socho's Late Night With In The Mailbox: 12.03.18, Power Line does much the same in Notes on the Cohen Plean (2), ending with the comment:


Sperry’s column runs under the headline “For Trump, Cohen Deal’s Beginning to Look a Lot Like Exoneration.” I would add, however, that I am quite sure it will not look anything like exoneration in Mueller’s report.

Also from  Wombat-socho's Late Night With In The Mailbox: 12.03.18. The American Thinker wonders whether the The FBI is Raiding Whistleblowers’ Homes To Protect Robert Mueller? Hmmm. This is what happens when you lose faith in the fairness of the FBI. Related, from Da Caller: Grassley Demands Answers From Wray Over Raid of Clinton Foundation Whistleblower


The main barrier to the Russia-Trump collusion theory — an information operation that was secretly bought and paid for by Hillary Clinton and the Democratic National Committee, spread by a compliant media, and weaponized by the highest levels of federal agencies — is the lack of evidence for it. But that lack of evidence hasn’t been much of an obstacle for either the so-called mainstream media or the leaders of the NeverTrump movement.

And then goes on to do a bang up job of outing the miscreants in the NeverTrump world. Ace picks up the notion, and continues it, NeverTrumpers Bitterly Clinton the Russian Collusion Dossier Some of Them Helped Pay For and showing how they are being rewarded by the liberals for their behavior:

The NeverTrumpers' work to push the partisan oppo file first collected up by Sidney Blumenthal and Cody Shearer has not gone unnoticed by the only people whose good favor matter to the NeverTrumpers: their leftwing media colleagues'.

NeverTrumpers are receiving accolades from liberal journalists for joining with the Russia conspiracy theory. CNN's Ryan Lizza said he hopes people remember Hayes' bravery for pieces such as the one above
. . .
Curiously, this Strange New Respect from left-wing media activists doesn’t cite fidelity to fact as the reason for the plaudits. Instead, the praise is heaped entirely for the bravery and courage of…agreeing with Democrats and the media that Trump is gross and shouldn’t be president.


NeverTrump Republicans are few in number—insignificant at the ballot box. But they have outsized power and prestige in Washington, D.C.’s “permanent village.” Some Bushies, and most neoconservatives, are in the NeverTrump camp.

It’s evident that Bushies and MAGA people disdain one another. For true Bushies, this is something bred in the bone, but it is mostly a matter of manners. Neoconservative NeverTrumpers are power-hungry ideologues. They make extravagant displays of their supposed moral revulsion at Trump, without the decency and sincerity of the always-in-good-taste Bushies.

I don’t hold out much hope for the power-hungry ideologues to have a change of heart. But I do pray that the passing of George H.W. Bush might become a moment of grace and illumination for those Bushies who now oppose Trump.

It’s in the Bushies’ interest—not to mention the nation’s—that they overcome their heartburn about the indelicate New Yorker who currently occupies their genteel hero’s old Oval Office. They should put aside their differences with the Trump administration. They should recognize that the forces that sought to destroy Clarence Thomas and Brett Kavanaugh are the same, and their playbook is the same.

The deep state-hard left combination that aims to impeach Trump also was implacable in its efforts to impeach George H.W. Bush, and, for that matter, to impeach Ronald Reagan, Dick Cheney, and George W. Bush.

Michael Isikoff swears Mueller preparing endgame for Russia investigation. That would surprise me, since it looks like one of the purposes of the Mueller investigation is to keep Trump under it's cloud until the 2020 election. And from Axios, Mueller's breadcrumbs suggest he has the goods


Everyone's waiting for the "Mueller Report." But it turns out that special counsel Robert Mueller is writing a "report" in real time, before our eyes, through his cinematic indictments and plea agreements.

The big picture: One of the least-noticed elements of the special counsel's approach is that all along, he has been making his case bit by bit, in public, since his very first court filing. With his major court filings so far, Mueller has already written more than 290 pages of the "Mueller Report." And there are still lots of loose ends in those documents — breadcrumbs Mueller is apparently leaving for later. 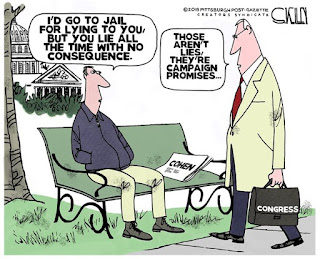 A trail of indicted Russians who will never see a courtroom, and Trump supporters the Mueller has managed to trap into process crimes committed at as result of his investigation? That's some legacy. At Da Hill Conway's husband suggests Trump is tampering with witnesses or countering Mueller's entrapments. NBC News Think President Trump seems rattled now? There may be more to come But they've been disappointed before. Matthew Walter at Da Week: The crisis Mueller is sowing


At this point the most obvious fair-minded explanation of the Russia investigation is that it exists to paralyze the Trump administration. It certainly monopolizes the president's attention. When he is abroad he broods over the latest media talking points from his suite. When he is in Washington, he fumes in front of the television and tweets his favorite tidbits from Fox News. The special counsel has taken his attention away from diplomacy and the other ordinary business of the presidency. Mueller has failed to deliver the goods not simply because there are no goods to deliver but because delivering them is not the point. The point is to hurt Trump.

Even if Mueller gets something real — a perjury charge, say — it won't matter anyway. There is no constitutional mechanism for the criminal prosecution of a sitting president. Mueller understands this. His fanboys should too but they insist that somehow, somewhere, in some way it must be possible to get the commander-in-chief in front of a jury. It cannot happen while he is in office. Nor should it. If it were possible to prosecute the president of the United States, the number of frivolous charges brought against the resident of 1600 Pennsylvania Avenue would be almost unimaginable. The White House would have to be moved to Guantanamo Bay to prevent a Republican attorney general in Nebraska from indicting a sitting Democrat on RICO charges because he vetoed legislation repealing the Affordable Care Act.

Jazz Shaw at Hot Air asks a good question in How Does The First Amendment Relate To Prosecuting Assange? Remember when Assange was a liberal hero? I do. 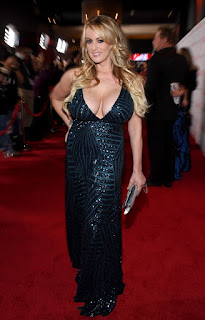 The adult movie star whose real name is Stephanie Clifford could be hit with a bill for as much as $778,806 after she alleged that Trump defamed her when he accused her of a “total con job” in a tweet and a judge concluded the president was just exercising his free speech rights.

At a hearing Monday, U.S. District Judge S. James Otero didn’t tip his hand as to how he’ll rule after Clifford’s lawyer, Michael Avenatti, called the attorney fee request “gross and excessive,” and then labeled the sanction demand “absolutely absurd and outrageous.”

Pleased that Michael and I have sorted shit out and we know the accounting is on the up and up. We are going to kick ass together on two coasts tomorrow. #teamstormy
— Stormy Daniels (@StormyDaniels) December 2, 2018


. . . even as Michael Avenatti Preps for Two Weeks of Hell: Child Support, Debts, and Abuse Allegations


On Monday, Avenatti will appear in Los Angeles federal court to oppose what he’s called “staggering and grossly inflated” attorney’s fees that Daniels could owe for the failed defamation suit. Trump’s counsel, Charles Harder, wants Daniels to pay up $341,559. U.S. District Judge S. James Otero judge tossed the defamation case in October, and Avenatti has filed an appeal, which is pending.

Avenatti told The Daily Beast that he and Daniels will appeal Otero’s decision on the fees “regardless of the amount awarded.” He said that Trump and his former fixer, Michael Cohen, owe Daniels $1.5 million alone in attorney’s fees for her NDA lawsuit. “We have now forced Trump and Cohen to retreat in that case and basically admit we win. Thus they have to pay those attorneys fees and whatever Trump is awarded would be deducted from the $1,500,000 before Trump and Cohen have to write the check to Stormy,” Avenatti claimed.

He’ll also appear in Los Angeles Superior Court for a hearing on Daniels’ lawsuit against Cohen and her ex-attorney, Keith Davidson, who represented her in the “hush agreement” she signed before the 2016 election in exchange for $130,000. Daniels has accused Davidson of colluding with Cohen behind her back.

Then, on Friday, the pugnacious attorney is ordered to appear in Orange County Superior Court for a debtor’s examination related to unpaid child and spousal support in his divorce, records show. According to one September court filing, Avenatti owes his ex-wife more than $1 million. Asked for comment, Avenatti would only say, “Not accurate. There is nothing scheduled.”

And next week, there’s a hearing in Los Angeles for ex-girlfriend Mareli Miniutti’s temporary restraining order against him, court records indicate. (For his part, Avenatti has denied the 24-year-old actress’s claims that he called her an “ungrateful bitch” and struck her with pillows and claims the accusations were “fabricated” to destroy his reputation.) Los Angeles County prosecutors ultimately declined to file felony charges against Avenatti and have referred the case to the city attorney for a possible misdemeanor action.

“I obviously cannot comment in detail at this time but what I can say is I am entirely innocent and did nothing wrong,” Avenatti said in an email. “I will be exonerated, especially when the video that I have demanded be released is released.” Avenatti then reiterated his claims that right-wing conspiracy theorist Jacob Wohl had orchestrated Miniutti’s domestic violence claims, which led to his arrest.

Oh, Michael, please run for the presidential nomination! And Democrats, please take him!
Posted by Fritz at 8:52 AM