Can a California Mastodon Remake the History of Men in America? 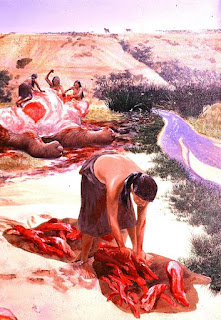 Cutting to the chase, a mastodon fossil in San Diego, dated to 130,000 years ago, shows signs of being broken while fresh using heavy stones, also found at the site. The people who examined the fossil could think of only one explanation, humans (or hominids) breaking the bones to extract the marrow. Unfortunately, there is no good evidence for the presence of humans in North American anywhere near that early, as even in the most fevered dreams of Pre-Clovis belief, humans only arrived in the New World about 15,000 years ago, as the last glaciation was starting to lose it's grip. This find would put the date to just prior to the start of the glacial warm period before our nice, comfy one. 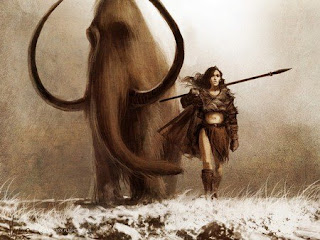 Needless to say, the suggestion doesn't sit well with many paleontologists.

Regardless of the truth of the allegation, it would appear likely that any prior invasion of the North America by humans was unsuccessful, as the genetics of the modern Redskins Indians Native Americans can be closely tied to the modern inhabitants on the other side of the Bering Strait.

Maybe it was the Denisovans. They seem to have gotten around a bit and left only a couple of bones, and a few genes behind.

Wombat-socho has "Rule 5 Sunday: Merry Christmas!" up and running.
Posted by Fritz at 7:38 PM