I got a text from Pete last night that he was going to Buzz's Marina to pull the boat for the year and take it to be worked on, and hinted that we just might do a little fishing while we were there. He still had 530 lbs of commercial quota to fill by the and of the year. 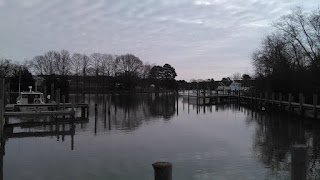 I accepted, of course, and rode down with him, arriving rather late, at 10:30. Winds were light, but it was cold, 31 at the time, reaching 36 by midday. But between my float coat, gloves, long underwear and the heater in the cabin, I was not cold. 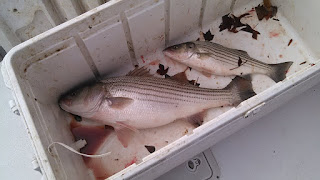 Pete had several calls telling him where fish were, and we picked the one with gannets. It was probably a 12 mile run, but when we arrived, you could see birds swirling and diving in bunches, gannets mixed with large gulls, showing that big bait was being pushed up near the surface. My first two fish. 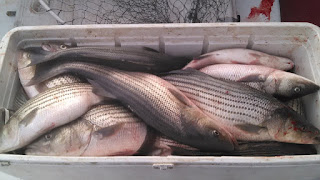 Fishing was nothing short of awesome, and we soon had 87 fish, averaging around 6 lbs and no need to move very far or very often to find them. There were 3 coolers like this one. 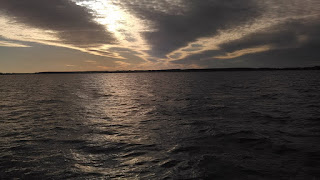 We left when Pete estimated his remaining quota was filled, and we were back in the creek with light to spare to tag and load the fish.

That ought to hold me 'til next year.

UPDATE: Pete called this morning with the report from the check in. 591 lbs, within the allowed "overage" of his quota, for an average of 6.8 lbs per fish in four hours of fishing.
Posted by Fritz at 8:15 PM