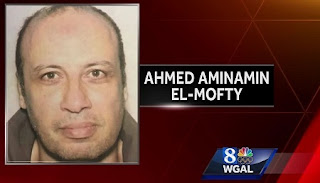 
Call it a hunch, but I don’t think he’s Amish:


Hours after three shootings resulted in a trooper shot and the suspect killed, police have released additional details about the shooter.
Dauphin County District Attorney Ed Marsico identified the shooter as 51-year-old Ahmed Aminamin El-Mofty at a news conference late Friday night.
Though details about El-Mofty are being unraveled by investigators, Marsico said it “certainly appears that there’s no doubt” he was targeting police officers.
Marsico said El-Mofty initially fired “several shots” at a police car belonging to a Capitol Police officer at 4:10 p.m. in the area of 3rd and Walnut streets. One shot came “very close” to hitting the officer, but the officer was able to escape uninjured.
El-Mofty then fired several shots at a Pennsylvania State Police trooper about 30 minutes after the initial shooting.
“She was struck by one of those shots, but is doing well,” Marsico said, adding the trooper is expected to make a full recovery.
Marsico added the trooper was chased by El-Mofty to the Allison Hill section of the city to the area of 17th and Mulberry Streets, where he opened fire at officers with two handguns.
Officers returned fire, shooting and killing El-Mofty. . . .
El-Mofty also has ties to the Middle East, and traveled there recently, according to Marsico.
Marsico declined to comment on if Friday’s shootings were an act of terrorism, saying the motive was still under investigation.
“Obviously, we don’t want people to run wild in speculation,” he said.

Yeah, just a guy from the Middle East trying to kill cops in Pennsylvania. We wouldn’t want to “run wild in speculation,” right? 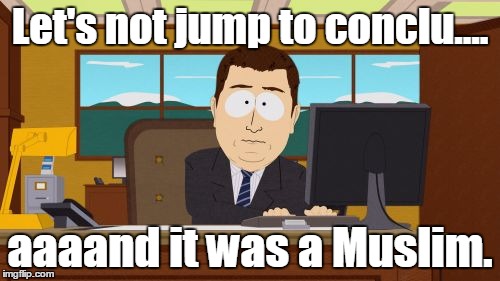 And yes, DHS is calling it terrorism:  Homeland Security Official Confirms Friday Attacks on Police in Harrisburg Were Terrorism


Last night, Acting DHS Press Secretary Tyler Houlton posted a statement on Twitter not only confirming Friday's incident was a terror attack, but also identifying that El-Mofty's naturalization as a U.S. citizen came through chain migration.


The Department of Homeland Security can confirm the suspect involved in a terror attack in Harrisburg, Pennsylvania and another suspect arrested on terror-related money laundering charges were both beneficiaries of extended family chain migration.
Ahmed Amin El-Mofty was a was a naturalized U.S. citizen who was admitted to the United States from Egypt on a family-based immigrant visa. El-Mofty was killed yesterday in a shootout after allegedly opening fire and targeting police at multiple locations in Harrisburg, Pennsylvania. The long chain of migration that led to the suspect's admission to the United States was initiated years ago by a distant relative of the suspect. One of the most recent links in that chain was an extended family member admitted into the United States from Egypt on an F24 visa.

Houlton corrects earlier information that El-Mofty had come from Turkey.

El-Mofty's estranged wife, who is also from Egypt, believed he moved overseas after their separation in 2011, she told local media yesterday. Early reports indicated that El-Mofty had recently made a trip to the Middle East.

Neighbors also told media a long stream of men would visit the Camp Hill home, and that immigration authorities had raided the property last year.

When one neighbor was asked whether he could identify El-Mofty coming to the home, he replied, "There's so many guys coming in an out it's impossible to say."

They should have fun going through his phone and social media.
Posted by Fritz at 3:24 PM