There Go the Judge! #HimToo! 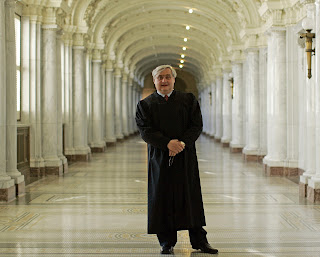 Alex Kozinski, the powerful judge on the U.S. Court of Appeals for the 9th Circuit who was facing a judicial investigation over allegations that he subjected women to inappropriate sexual behavior, announced Monday that he would retire effective immediately.

In a statement provided by his lawyer, Kozinski apologized, saying that he "had a broad sense of humor and a candid way of speaking to both male and female law clerks alike" and that, "in doing so, I may not have been mindful enough of the special challenges and pressures that women face in the workplace."

Hey, you can't talk to grown women like that! It might cause them to have to think!


He added, "It grieves me to learn that I caused any of my clerks to feel uncomfortable; this was never my intent. For this I sincerely apologize."

Kozinski, 67, said that although family and friends had urged him to stay on, "at least long enough to defend myself," he "cannot be an effective judge and simultaneously fight this battle. Nor would such a battle be good for my beloved federal judiciary. And so I am making the decision to retire, effective immediately."

As a federal appeals court judge, Kozinski was appointed for life and did not report to any higher authority, although he could be impeached by Congress. The inquiry he was facing could have led to his being reprimanded, asked to retire or blocked from taking new cases for a period of time, but his judicial colleagues could not by themselves have forced him from the bench.

While I generally agreed with Kozinski's libertarian values and ruling, I look forward to seeing who President Trump appoints to replace him.
Posted by Fritz at 8:07 AM