A man detonated a small bomb near Times Square in Manhattan this morning. A suspect is reported to be in custody.

UPDATE: In what NYC Mayor Bill DeBlasio called an “attempted terrorist attack,” the 27-year-old suspect named Akayed Ullah detonated a “low-tech improvised explosive device” in a subway station, NYPD commissioner James O’Neill said. The bomb caused only minor injuries to three people, and there are currently no known threats to the city. 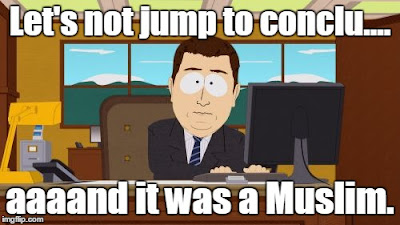 UPDATE II: Did we mention that the terrorist is a Muslim immigrant?

The Bangladeshi jihadist came on what amounts to a "nephew visa" - F43 visa, for the under-21 child of a person getting a green card because he/she is the sibling of a US citizen. #ChainMigration
— Mark Krikorian (@MarkSKrikorian) December 11, 2017

The important question, however, is: How much Diet Coke should Trump drink?

President Trump calls for end of chain migration as part of immigration reform.

Kill him, feed him to pigs, and send the shit back to Bangladesh.
Posted by Fritz at 5:07 PM