Reason #5781 That Trump Was Elected


It’s a subject which has been dragging on in the courts for several years now, but it may finally be coming to a close. While the Obama administration was in charge of the Department of the Interior there was a move to impose new methane regulations on any drilling taking place on federal lands. This led to a number of lawsuits from groups such as the American Petroleum Institute which kept bringing up inconvenient facts such as how the government was violating their own rules for introducing new regulations and that the science behind the government’s claims was mostly bunk.

This week, however, things changed once again. With a new announcement from the Bureau of Land Management (which falls under the Interior Department), as Emily Litella might say… never mind. (Reuters)


The Trump administration will delay an Obama-era rule limiting emissions of the powerful greenhouse gas methane from oil and gas operations on federal and tribal lands, it said on Thursday, a move slammed by environmentalists.
The Bureau of Land Management, an office of the Department of Interior, will officially suspend the rule on Friday to “avoid imposing likely considerable and immediate compliance costs on operators for requirements that may be rescinded or significantly revised in the near future,” it said in a document to be published on Friday.
Implementation will be delayed one year until Jan. 17, 2019.
Energy companies say the rule, finalized at the end of the Obama administration, could cost them tens of thousands of dollars per well, and some driller groups had sued the previous administration.

The two key phrases here to watch are, “delayed by one year” and, more to the point, “requirements that may be rescinded or significantly revised in the near future.” In other words, at some point between now and January of 2019 that new rule is almost certainly going away or being changed to match scientific reality. (My money is on the latter.)

I'm not seeing the problem here even assuming methane is a significant greenhouse gas: 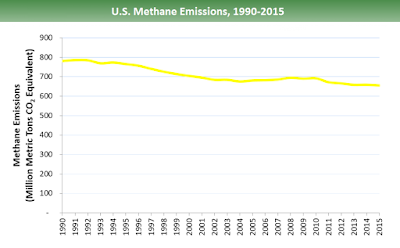 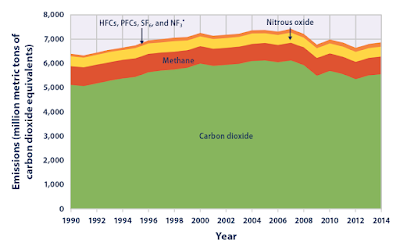 If these new rules were enacted it wouldn’t do much, if anything, to reduce methane levels from drilling. If they want to go after methane emissions, they’ll need to start going around and putting corks in the cows’ butts. Perhaps they can talk to the folks in California who are already doing that. Okay… they’re not literally putting corks in animal orifices, but they are regulating the beef and dairy industry in terms of bovine methane emissions. 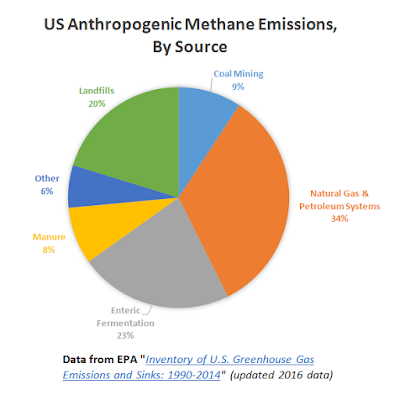 California is taking its fight against global warming to the farm. The nation’s leading agricultural state is now targeting greenhouse gases produced by dairy cows and other livestock.
Despite strong opposition from farmers, Gov. Jerry Brown signed legislation in September that for the first time regulates heat-trapping gases from livestock operations and landfills.
Cattle and other farm animals are major sources of methane, a greenhouse gas many times more potent than carbon dioxide as a heat-trapping gas. Methane is released when they belch, pass gas and make manure.

See? You really can’t make this stuff up. They’re regulating cow flatulence. California is truly a wonder to behold.

Why has no one targeted landfills? Too urban? Hate to make city people pay for their messes?
Posted by Fritz at 4:32 PM