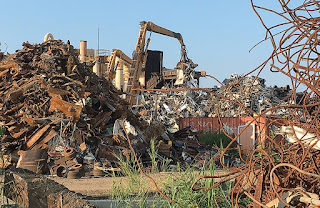 
Maryland environmental regulators have fined a South Baltimore scrapyard $50,000 for allowing toxic metals and oil to wash into the Patapsco River.

The agreement comes nearly two years after officials first found that the company was violating its permits.

As part of a settlement with the Maryland Department of the Environment, the Baltimore Scrap Corp. also agreed to spend at least $750,000 on systems to filter stormwater runoff that washes over its property and into the harbor near Fort McHenry.

It's good to see that the bulk of the money is being spent to remediate the site, rather than to feed our bloated state government.

Baltimore Harbor/Patapsco River is one of three areas of Chesapeake Bay designed a region of special concern for toxic substances, both metals and organics. The other two are the Elizabeth River in the Norfolk, Virginia area, and the Anacostia River in Washington, D.C. Baltimore has a metals problem in part because of a historic releases from long established metal refining and processing industry.
Posted by Fritz at 3:38 PM