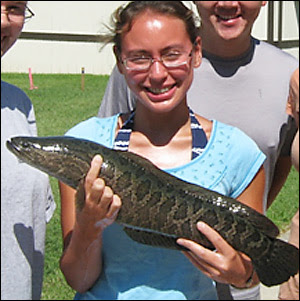 Snakeheads Studied to Learn their “Walk”


Among wild creatures with strange legends attached to their name, the northern snakehead is said by some to be a fish that walks. The truth is this unwanted invasive species does move on land, if not by actually walking – and figuring out how they do it has captured the attention of one researcher.

The Maryland Department of Natural Resources is helping Noah Bressman, a Ph.D. candidate at Wake Forest University, in his study of northern snakeheads’ mysterious locomotion.

“The department was excited when Noah requested to study overland movement of northern snakeheads,” Fishing and Boating Services Biologist Joseph Love said. “We were happy to support his thesis research by providing him information on snakehead biology and management, obtaining specimens and providing him laboratory space to conduct his research.” 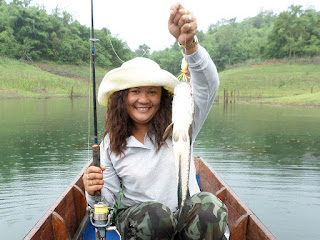 “(Northern snakeheads) make almost the same movements as soldiers,” Bressman said. “Soldiers crawl by moving their leg and opposite arm to move.”

Northern snakeheads do this by moving their back fin and head in opposite directions propelling them forward. Yet, the muscle movements that snakeheads use to traverse terra firma has not been fully understood.

But does studying it allow you to do anything about it? Bueller?

Wombat-socho has "Rule 5 Monday: Linda Ronstadt" ready at The Other McCain.
Posted by Fritz at 4:07 PM