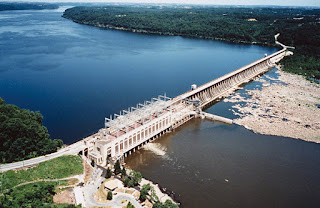 A group of environmentalists released a study Tuesday suggesting the owner of Conowingo Dam on the lower Susquehanna River can afford to help reduce or counteract the pollution that flows past the dam, harming Chesapeake Bay health.

But the company, Chicago-based Exelon Corp., said the analysis is flawed. Moreover, Exelon said it shouldn’t have to bear responsibility for dirt and rocks that wash into the bay across hundreds of miles.

“Most of the sediment that impacts the Bay comes from upstream sources,” Exelon officials said in a statement. “As such, the regional sources of sediment across the basin should take joint responsibility for the issue, not a single company or entity.”

Excessive amounts of sediments are among the chief detriments to the Chesapeake’s health, clouding waters and starving underwater plants of sunlight. More sediment has been washing into the bay in recent decades as development and pavement have spread.

The Conowingo has long trapped much of the sediment that flows down the Susquehanna and would otherwise reach the Chesapeake. But it has reached its capacity, and environmentalists and state officials have been working since last year to find a way to dredge behind the dam or otherwise find a way to catch sediment.

The study, commissioned by the Chesapeake Bay Foundation and the Nature Conservancy, studied the Conowingo’s revenues and expenses and estimates of Susquehanna flow rates and electricity prices. Researchers from the consulting firm Energy and Environmental Economics concluded that Exelon could afford to spend $27 million to $44 million a year on efforts to reduce or counteract sediment and other pollution.

“Exelon has the responsibility and revenue to pay for its share of the solution,” bay foundation President Will Baker said in a statement.

Conowingo Dam, designed to produce electricity starting in 1928, has been protecting the Bay from sediment washed down the Susquehanna for almost 100 years as a beneficial side effect. Now that its pond is full of that sediment and can no longer serve that function,  environmentalists expect the current owners of the dam to restore that function for them, just because they have the deep pockets.

How about CBF raise the money from donors, and/or its own budget? Incidentally, CBF has assets of approximately $95 million.