Did Trump Smite Rocket Man with the "Rod From God?"

Via Wombat-socho "In The Mailbox: 12.04.17," Don Surber thinks maybe: Trump may have ended Nork's nukes program

Evidence shows that this may be the result of the Rods from God program -- a tungsten rod fired to Earth from space.
. . .
From Business Insider:


The idea is like shooting bullets at a target, except instead of losing velocity as it travels, the projectile is gaining velocity and energy that will be expended on impact. They were shotgunning a large swath of jungle, raining bullet-size death at high speeds.
That's how Project Thor came to be.
Instead of hundreds of small projectiles from a few thousand feet, Thor used a large projectile from a few thousand miles above the Earth. The "rods from god" idea was a bundle of telephone-pole-size (20 feet long, 1 foot in diameter) tungsten rods, dropped from orbit, reaching a speed of up to 10 times the speed of sound.
Why tungsten? That's what we use to make the coils in incandescent lamps. The element can withstand the heat. It melts at 6192 °F, steel at 2500 °F.

Not to mention that it's the second heaviest metal on the periodic table. Kinetic energy = 1/2 Mass*Velocity squared. That velocity squared is the most important factor, but extra mass helps too. 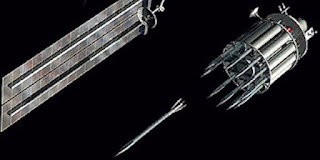 More on the "Rod from God" idea:


Project Thor is an idea for a weapons system that launches telephone pole-sized kinetic projectiles made from tungsten from Earth's orbit to damage targets on the ground.

Jerry Pournelle originated the concept while working in operations research at Boeing in the 1950s before becoming a science-fiction writer.


The system most often described is "an orbiting tungsten telephone pole with small fins and a computer in the back for guidance". The system described in the 2003 United States Air Force report was that of 20-foot-long (6.1 m), 1-foot-diameter (0.30 m) tungsten rods, that are satellite controlled, and have global strike capability, with impact speeds of Mach 10.

The time between deorbit and impact would only be a few minutes, and depending on the orbits and positions in the orbits, the system would have a worldwide range. There would be no need to deploy missiles, aircraft or other vehicles. Although the SALT II (1979) prohibited the deployment of orbital weapons of mass destruction, it did not prohibit the deployment of conventional weapons. The system is not prohibited by either the Outer Space Treaty or the Anti-Ballistic Missile Treaty.

The idea is that the weapon would naturally contain a large kinetic energy, because it moves at orbital velocities, at least 8 kilometers per second. As the rod would approach Earth it would necessarily lose most of the velocity, but the remaining energy would cause considerable damage. Some systems are quoted as having the yield of a small tactical nuclear bomb. These designs are envisioned as a bunker buster.As the name suggests, the 'bunker buster' is powerful enough to destroy a nuclear bunker. With 6–8 satellites on a given orbit, a target could be hit within 12–15 minutes from any given time, less than half the time taken by an ICBM and without the launch warning. Such a system could also be equipped with sensors to detect incoming anti-ballistic missile-type threats and relatively light protective measures to use against them (e.g. Hit-To-Kill Missiles or megawatt-class chemical laser).

In the case of the system mentioned in the 2003 Air Force report above, a 6.1 m × 0.3 m tungsten cylinder impacting at Mach 10 has a kinetic energy equivalent to approximately 11.5 tons of TNT (or 7.2 tons of dynamite). The mass of such a cylinder is itself greater than 9 tons, so the practical applications of such a system are limited to those situations where its other characteristics provide a clear and decisive advantage—a conventional bomb/warhead of similar weight to the tungsten rod, delivered by conventional means, provides similar destructive capability and is far more practical and cost effective.

The highly elongated shape and high mass are to enhance sectional density and therefore minimize kinetic energy loss due to air friction and maximize penetration of hard or buried targets. The larger device is expected to be quite effective at penetrating deeply buried bunkers and other command and control targets.

Robert Heinlein used "Rocks from God" in his classic Sci-Fi novel "The Moon is a Harsh Mistress."  It's a true classic from before Heinlein went all nuts with sex and incest. Lunies, the people who have been settled on the moon as prisoners, and are suffering under the yoke of earthly bureaucrats and military declare their independence, and enforce it by "dropping rocks" on the Earth. Rocks are cheap, but tungsten telephone poles are cooler.

In Surber's article above, Mattis is cagey about whether we have such a system available. I have to believe that we do, because if it could be done, we would do it. As Mattis has said:

“Nothing,” a stonefaced Mattis responded. “I keep other people awake at night.”

I'm going to have to hint around about this to my Pentagon contact eventually.
Posted by Fritz at 9:34 AM