Sexism is Alive and Well in the Public Schools 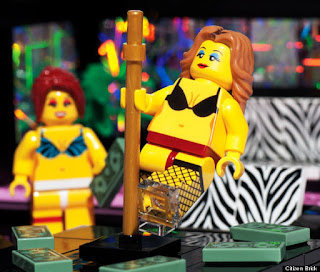 Karen Keller bars the boys in her class from playing with the colorful blocks, even going so far as to lie to them about their opportunity to play.

"I always tell the boys, 'You're going to have a turn' — and I'm like, 'Yeah, when hell freezes over' in my head," Keller told the Bainbridge Island Review. "I tell them, 'You'll have a turn' because I don't want them to feel bad."

She could have got the boys to voluntarily drop the Legos, if she'd provided play guns.


Keller had found research finding that Lego play accelerates development and helps with spatial and math skills. And since Keller believes that gender stereotypes are ingrained into girls at a young age, well, something had to be done.

Of course, currently, the actual "gender gap" between boys and girls in science and math is quite minor:


Overall, boys are ahead of girls in math (by an equivalent of about three months of schooling), about even with girls in science and a year behind girls in reading.

Part of the reason for this more recent disparity is that boys spend less time doing homework and reading books than girls. Another reason is teachers like Keller, who actively hold boys back in order to promote girls.

The OECD also found that teacher assessments favor girls, while anonymous tests allowed boys to do much better.
. . .
As one of my Twitter followers said: "When you have an axe to grind with 5yr old boys, maybe you shouldn't teach kindergarten."

The teacher and the school now claim that the discrimination was temporary, and anyway, they didn't discriminate:


Keller claimed she only instituted the "girls only" Lego play for the first month of school to get them interested in the toys. She also said her "hell freezing over" remark was "a casual, off-record aside meant to convey my frustration with the marketing to girls in our society." She said that it was "not appropriate" and "taken out of context." She insisted that every student in her class has access to Legos.

The school district called the Review article "inaccurate" and said the school does not discriminate on the basis of sex.

The teacher should be sentenced to be Greenhorn for a year on the Capt. Keith Colburn's crab boat Wizard. The $1,000,000 fine the school district should pay would be used to offset his loss of income from her lack of productivity.
Posted by Fritz at 4:49 PM