Can the Redskins Defang the Panthers? 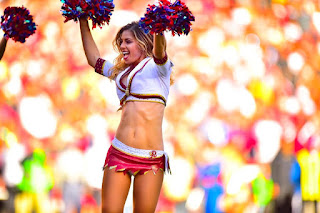 The 4-5 Washington Redskins about to meet the 9-0 Carolina Panthers at BOA Stadium in Charlotte, NC. Given their respective records it seems unlikely. But they had a great day last week against New Orleans, so who knows?

Panthers take the kickoff to the 40 yard line. 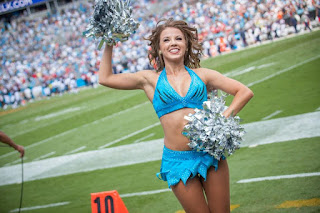 
Q: What should the franchise do about the name and the complaints about it being racist? 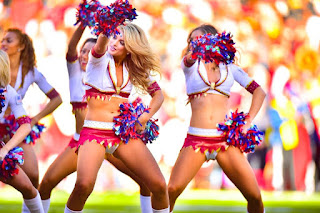 
A: I’ve said on many occasions that my initial response was the owner didn’t want to have a dialogue and I said that wasn’t right. It deserves a conversation, a response, a discovery of the legitimacy of what is being challenged. I still maintain that. I have also been on record that I’m not throwing away anything that is Redskins that I played under that flag. But I think it’s fair and responsible to come to a clear conclusion to say this is right or this is wrong, and this is hurting people. 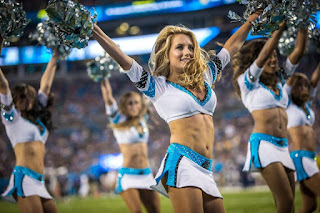 
I have not seen their voice and their representation at a national level. I’ve seen people talk about it, but I have not seen anybody representing those people. Back in history, we had a face in Dr. King who had a message that needed to be responded too. … Nobody really knows what the issues are. If that comes, the Redskins are responsible to respond to that. As far as I’m concerned, I’m not throwing anything I have but I’ll support whatever decisions are made down the pike. 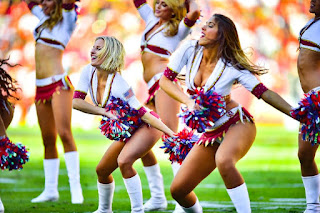 Garçon catches a nice pass at the 46. Touchdown pass to Garçon on the next play, 7-7! Great response.


The name “Redskins” is offensive to Native Americans, and we wish that the owners of the National Football League franchise in Washington, D.C., would retire it. But the government’s decision to deprive the name of federal trademark protection went too far, and the team has the First Amendment on its side in challenging that decision. 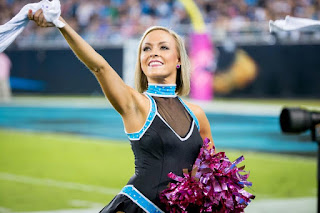 
In 2014, at the behest of five Native Americans, the U.S. Patent and Trademark Office canceled the Redskins’ trademark registration, citing a federal law that prohibits trademark protection for names that “may disparage ... persons, living or dead, institutions, beliefs, or national symbols, or bring them into contempt or disrepute.” The decision didn’t prohibit the team from continuing to use the name, and left in place some legal avenues for the team to contest trademark infringement of the “Redskins” name by others. In July, the decision was upheld by a federal district judge in Virginia. 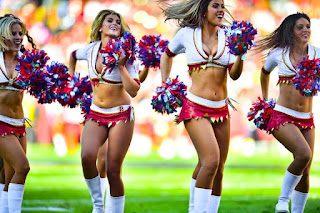 Andre Roberts returns the kickoff 99 yards for a Redskins touchdown! Kick is good. 14-14!


Now the team is appealing that decision to the U.S. 4th Circuit Court of Appeals, and it makes several compelling arguments. The most persuasive is that the “disparagement” clause in trademark law violates the 1st Amendment because it “discriminates based on content and viewpoint.” 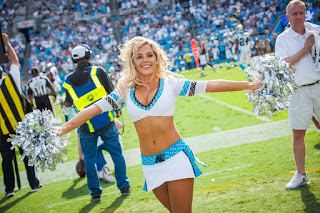 Panthers drive from the 22. Flags on the third play, holding on the offense,declined, Carolina punts, Redskins take it on the 35. Oh yeah, we're barely into the 2nd quarter.

While I went and grabbed lunch, the Redskins were force to punt, and Carolina took it near their own goal. First down at the 23. Another first at the 40, and then another in the Redskins territory.  On the next play, a high hit and a recovered fumble for a TD by the Redskins is flagged and called back. Panthers on the Redskins 13 yard line. Redskins almost get an interception behind the goal line, but drop it. Pass interference on the Redskins puts the Panthers at the 1. Holding against the Redskins, half the tiny distance. Carolina challenges an incomplete pass call in the end zone. . .  Panther TD, 21-14 Panther. OK, that was ugly. 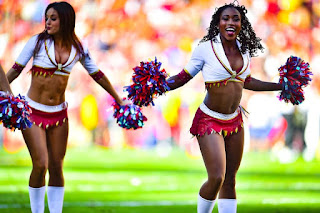 Ordinarily, the government may not regulate speech based on its content, but the Supreme Court has carved out an exception for “government speech.” In upholding the Patent and Trademark Office’s action, U.S. District Judge Gerald Bruce Lee concluded that decisions about trademark registration are “government speech.”

Redskins take it at the 20. Caroline recovers a fumble at the Redskins 24. Oooof. 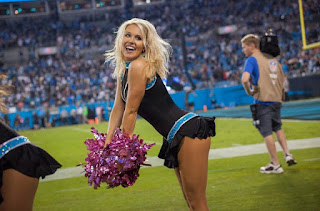 Carolina backed up to the 34 on a penalty. but make it back on the next play. And more on the next. Newton pass gets a first down at the 7. Newton pass to Olsen for a Panthers touchdown. Kick is good, 28 - 14 Panthers.


The Supreme Court invoked that same rationale earlier this year in ruling that the state of Texas could reject specialty license plates featuring the Confederate battle flag. ... (B)ut even if one considers a slogan on a license plate an expression of the government’s opinion, the same can’t be said for the 2 million trademarks registered by the office. 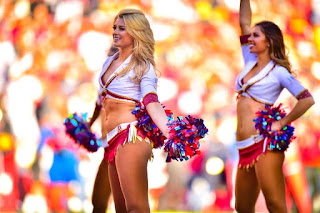 Redskins at the 50 yard line.Garcon first down to the 36. Reed makes another first down on a Cousins pass and extra effort to the 25. Cousins runs to the 5 yard line, but is called back for a holding penalty. 2 minute warning. Ugly sack with flags. Panthers Ealy recovers strip/fumble on the 40.


As the team notes in its brief: “No one thinks about the government when buying Nike shoes, surfing Google or watching National Football League games. Many marks, such as ACLU and National Rifle Organization, represent organizations that regularly oppose government regulation.” As for offensiveness, the team notes that the list of registered trademarks includes several that are lewd or insulting, such as SlutsSeeker (a dating service), Dumb Blondes Beer and Dangerous Negro shirts. 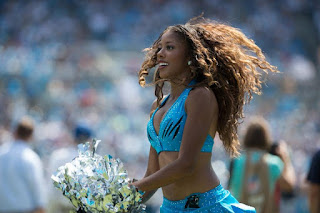 Cam Newton almost sacked but escapes to the side for a first down. 29 seconds left. Flag backs them up to the 44. First down to the 39. 16 seconds. Panthers first down to the 24. Panther to attempt field goal at 3 seconds. Good, 31-14 Panthers. Half time.


The legitimate mission of the Patent and Trademark Office is to regulate intellectual property rights by determining whether a name or symbol is original and distinctive. It shouldn’t be in the business of choosing among trademarks on the basis of offensiveness. The 4th Circuit should recognize that fact and leave the debate over “Redskins” to the court of public opinion. 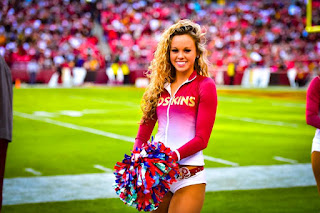 
When the U.S. Labor Department’s Center for Civil Rights wanted to celebrate its accomplishments last week, its managers threw the staff a football-themed tailgate party in the office parking lot.

The invite, distributed across the agency’s official email system, had all the rah-rah of a playoff game. “Celebrate a championship year!” it declared. 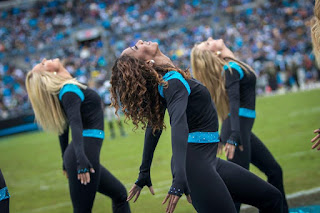 Kickoff results in the Redskins taking it from the 20. On the first play, a sack of Cousins results in a fumble recovered by the Panthers at the Redskins 12. Ouch. Redskins offsides sends them to the 6 (yes there was a play in there). Cam Newton pass to Fuchness for a touchdown. Kick is good, 38-14 Panthers.


There was only stipulation: no Washington Redskins jerseys, paraphernalia or memorabilia.

“It has been respectfully requested that employees voluntarily refrain from wearing clothing or other sports memorabilia that promote Washington D.C.’s professional football team, the Redskins, or other teams that use names, characters, etc. that may portray American Indians or other cultures in a derogatory manner,” an asterisk-marked note at the bottom of the invitation reader. 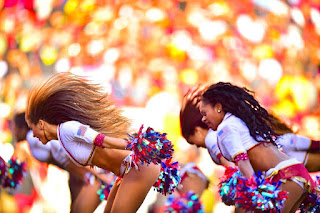 Redskins back at the 20. Pass stuffed behind the line of scrimmage, 3d and 15. Washington punts. Panthers recover at their own 27.

First down, Panthers at the 40. Forced to punt after no real gains. Redskins from the 20. Sacked on the first play, back to the 14. Redskins punt, Panthers recover on their own 33.


An email from an office manager went into greater detail about the ban, while forwarding the invite.

“While I recognize the varying opinions surrounding the name of the Washington D.C. football team, as a civil rights office, I ask us all to be particularly sensitive to names, symbols, etc., that may be considered offensive based on race, ethnicity, sex, etc.,” the email read. 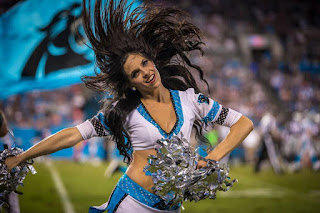 First down Panthers at the 43 ish. First down on a pass to Olsen at the 50. Another to the 40. Redskins offsides, to the 35 yard line. Newton runs for another first down at the 30. 48 yard field goal is good, 41-14, Panthers. It's a palindromic score. The Redskins seem to have lost their drive.


“Please join me in promoting an inclusive environment for all employees and be conscientious about how we represent our values as a civil rights office.”

The email included links to statements opposing the Redskins logo from the Society of American Indian Government Employees (SAIGE) and Blacks in Government (BIG). 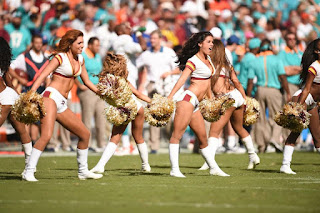 Redskins take it at the 20, yet again. Redskins go nowhere and get a holding call, back to the 15. Cousins pass to Jackson at the 35, first down. Redskins fumble, Redskins recover at the 45. Another fumble by Reed across the 50, this time the Panthers recover at the 35.


The two federal worker groups have asked the Office of Personnel Management to ban the use of the Redskins name or paraphernalia at government activities and to conduct training to educate federal workers on why the team name is “racially offensive.” 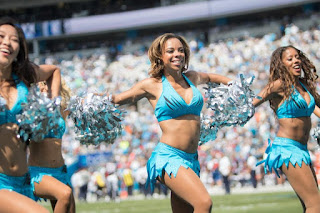 Stewart across the 50 for the Panthers.Into the 4th quarter. Newton pass to Fuchness to the 15 yard line. Tolbert rushes to the 9. Panthers to attempt field goal, good. 44 - 14 Panthers. So much for the palindrome.


The Labor Department invite was sent to The Washington Times by a reader who works for the agency who found the entire event took political correctness to a new level. 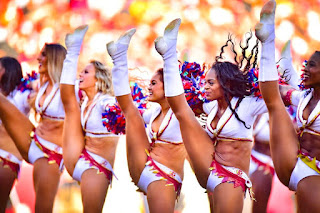 
Labor officials confirmed the invite and the event, which occurred Friday. They said no tax dollars were spent on the tailgate party, and the agency does not have a formal policy on the Redskins team name. 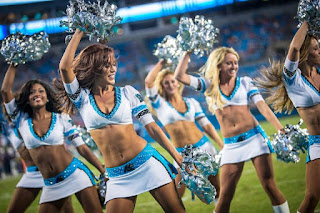 Panthers start from the 18.  Six minutes left. Panthers fumble and recover. They punt, Redskins take a fair catch at the 20, 4:50 left. Redskins grinding their time away getting to the 40 by 2:30, and are forced to punt.


“The Civil Rights Center is a small office, and the food was paid for by the managers, out of their pockets,” spokesman Stephen G. Barr said. “There is no DOL policy on sports teams.”

The Panthers start from their 4 yard line, but it's not like they really care. One minute left and the Panthers are back on their 2. Panthers delay of game, back to the 1. Safety 44-16 Panthers, while the Panthers dance in the end zone to stretch it out. 16 seconds left.

Washington takes the kick at the 42 with 10 seconds, and the game ends 44-16 Panthers. Linked at Wombat-socho's special post-Thanksgiving food coma double-stuffed Rule 5 compendium "Rule 5 Sunday: Them Ain’t Turkeys, Them Are Ducks."
Posted by Fritz at 1:04 PM