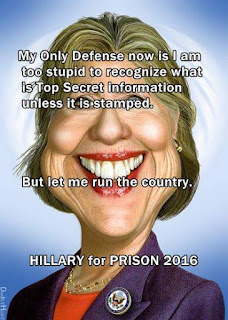 As the nation’s chief diplomat, Hillary Clinton was responsible for ascertaining whether information in her possession was classified and acknowledged that “negligent handling” of that information could jeopardize national security, according to a copy of an agreement she signed upon taking the job.

A day after assuming office as secretary of state, Clinton signed a Sensitive Compartmented Information Nondisclosure Agreement that laid out criminal penalties for “any unauthorized disclosure” of classified information.

Experts have guessed that Clinton signed such an agreement, but a copy of her specific contract, obtained by the Competitive Enterprise Institute through an open records request and shared with theWashington Free Beacon, reveals for the first time the exact language of the NDA.

“I have been advised that the unauthorized disclosure, unauthorized retention, or negligent handling of SCI by me could cause irreparable injury to the United States or be used to advantage by a foreign nation,” the agreement states.

The State Department said in September that Clinton’s private email system, set up at her Chappaqua, N.Y., home, was not authorized to handle SCI.

The Democratic presidential frontrunner defended her unauthorized possession of SCI and her sending of emails containing classified information by claiming that the information was not marked as classified when it was sent or received.

The language of her NDA suggests it was Clinton’s responsibility to ascertain whether information shared through her private email server was, in fact, classified.

“I understand that it is my responsibility to consult with appropriate management authorities in the Department … in order to ensure that I know whether information or material within my knowledge or control that I have reason to believe might be SCI,” the agreement says. 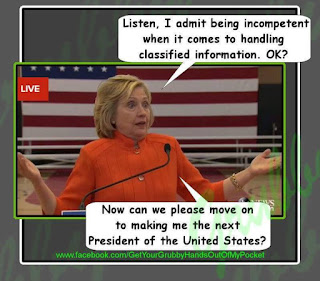 Mills sent classified information to officials at the Bill, Hillary, and Chelsea Clinton Foundation in 2012, an email released by the State Department in September shows.

Mills’ NDA required her to inquire about the classification of information in her possession if she was unsure about its status. However, her attorney said that she “presumed” that the information she sent to the foundation was unclassified because it had been sent to her at her unclassified State Department email address. 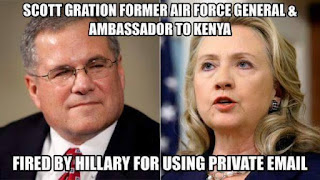 But Clapper has yielded to pressure from above and decided the secrets weren't meant to be secrets after all, according to the fake news outlet Politico.

After a review, intelligence agencies concluded that the two emails did not include highly classified intelligence secrets, the source said. Concerns about the emails' classification helped trigger an ongoing FBI inquiry into Clinton's private email setup.

Intelligence Community Inspector General I. Charles McCullough III made the claim that two of the emails contained top-secret information; the State Department publicly stated its disagreement and asked Director of National Intelligence James Clapper’s office to referee the dispute. Now, that disagreement has been resolved in State’s favor, said the source, who spoke on condition of anonymity.

A spokesman for Clapper said the review of the emails has not been completed. "ODNI has made no such determination and the review is ongoing," Clapper spokesman Brian Hale said.

However, the source said State Department officials had already received instructions from intelligence officials that they need not use the strictest standards for handling the two emails in dispute – meaning that they aren’t highly classified. 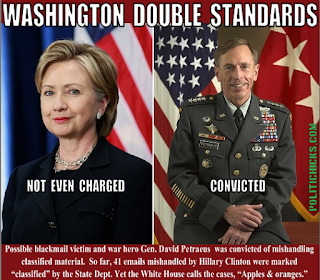 
The Clintonemail case is getting curiouser and curiouser as a State Department memo shows Hillary Clinton was warned about the potential of hacks on private emails while Secretary. Competitive Enterprise Institute and Washington Free Beacon got the 2011 memo showing security officials were very worried about phishing attacks.


Threat analysis by the DS cyber security team and related incident reports indicate a dramatic increase since January 2011 in attempts by to comprise the private home e-mail accounts of senior Department officials. The actorsare targeting senior United State government officials and their staffs. Victims include personnel at the Ambassador, Assistant Secretary, and Under Secretary levels at DoS, EOP, DoD, DOJ, Treasury, and the U.S. Senate.

No one should be surprised at all that hackers were going after the personal emails of government workers, but it again raises questions into just how secure Clinton’s private email server was. I’ve written before how Huma Abedin and Cheryl Mills were using non-government or Clintonemail accounts to conduct State Department business. It’s now looking more likely hackers targeted the private emails in hopes of gaining access to whatever information was out there. In fact, the memo points out hackers appeared to have known senior Department officials were using private emails.

It's always been my contention that Clinton.com emails were likely being read in real time by numerous foreign and personal hackers. She would be an obvious target for espionage, and the fact that she was using a private, largely unprotected server was a not particularly well concealed "secret". Although the secrets are bad enough, to have the whole business of the Secretary of State laid out would be a spies dream. 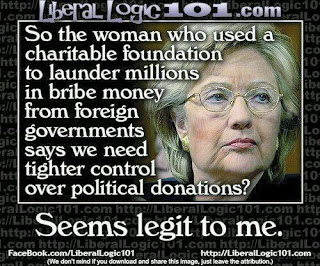 But on to happier thoughts from Maggie's Farm, a reminder of the very essence of the criminal/political mob I call Clinton.com: The Clinton money-laundering machine


. . . This is a summary of how the Clinton Foundation works as a tax-free international money laundering scheme. It will probably eventually prove to be the largest political criminal enterprise in U.S. history.

This is a textbook case on how you hide foreign money sent to you and repackage it to be used for your own purposes. All tax free. Here's how it works:

1. You create a separate foreign "charity." In this case one in Canada.

2. Foreign oligarchs and governments then donate to this Canadian charity. In this case, over 1,000 did, contributing mega-millions. I'm sure they did this out of the goodness of their hearts, and expected nothing in return. (Imagine Putin's buddies waking up one morning and just deciding to send untold millions to a Canadian charity).

3. The Canadian charity then bundles these separate donations and makes a massive donation to the Clinton Foundation.

5. The Clinton Foundation then "spends" some of this money for legitimate good works programs. Unfortunately, experts believe this is on the order of 10%. Much of the balance goes to enrich the Clinton's, pay salaries to untold numbers of hangers-on, and fund lavish travel, etc. Again, virtually all tax free, which means you and I are subsidizing it.

6. The Clinton Foundation, with access to the world's best accountants, somehow fails to report much of this on their tax filings. They discover these "clerical errors" and begin the process of re-filing 5 years of tax returns.

7. Net result -- foreign money, much of it from other countries, goes into the Clinton's pockets tax-free and untraceable back to the original donor.

This is the textbook definition of "money laundering."
. . .
Sarcasm aside, if you're still not persuaded this was a cleverly structured way to get unidentified foreign money to the Clinton's, ask yourself this:

Why did these foreign interests funnel money through a Canadian charity?

This is the very essence of money laundering and influence peddling. Now you know why Hillary's destruction of 30,000 e-mails was a risk she was willing to take.

"We have to ask ourselves: Why is this happening?" Clinton said. "Because of terrible governance, because of corruption, because of conflict, because of climate change, there are so many reasons why people are being, in their minds, forced to leave and try to get to safety."

and then gets into her comfy private jet which burns 350 gallons of jet fuel per hour to reach the next Video shows Hillary Clinton boarding private jet just hours after launching global-warming push – and she's using a FRENCH aircraft that burns 347 gallons of fuel every hour!
campaign stop:


Just hours after Hillary Clinton unveiled her presidential campaign's push to solve global warming through an aggressive carbon-cutting plan, she sauntered up the steps of a 19-seat private jet in Des Moines, Iowa.

The aircraft, a Dassault model Falcon 900B, burns 347 gallons of fuel per hour. And like all Dassault business jets, Hillary's ride was made in France.

The Trump-esque transportation costs $5,850 per hour to rent, according to the website of Executive Fliteways, the company that owns it.

And she has used the same plane before, including on at least one trip for speeches that brought her $500,000 in fees.

As Instapundit proclaims with some frequency, perhaps I would take the threat of global warming more seriously if the people who use it to promote their control over the world behaved like the possibility actually scared them.
Posted by Fritz at 8:55 AM