President Barack Obama on Friday rejected the proposed Keystone XL pipeline, ending the political fight over the Canada-to-Texas project that has gone on for much of his presidency.

Secretary of State John Kerry concluded the controversial project is not in the country's national security interest, and Obama announced from the White House that he agreed.

I'm sure glad we don't have to worry about that pipeline anymore: 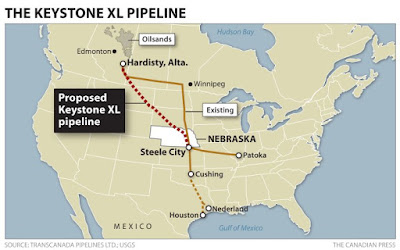 Can't let something like that get built in somebodies backyard:

Now Canada will have to sell all that oil to China. I'm sure they'll burn it carbon free. Union leaders who wanted the jobs will get no sympathy from me, although I have some for the workers.
Posted by Fritz at 6:53 PM