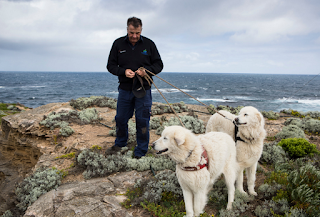 
Foxes killed 180 penguins in that particular episode, in October 2004. But the toll on Middle Island, off Victoria State in southern Australia, kept rising. By 2005, the small island’s penguin population, which had once numbered 800, was below 10.

Today, their numbers are back in the triple digits, and much of the credit has gone to a local chicken farmer known as Swampy Marsh and his strong-willed sheepdogs.

“The powers that be wouldn’t listen to me until it got down to six penguins,” said Mr. Marsh, whose long-unused birth name is Allan. “They were desperate.”

The farmer’s simple solution — deploy a particularly territorial breed of sheepdog to scare the foxes away — became local legend and, in September, the subject of an Australian film, “Oddball,” which fictionalized the story and made a lovable hero of one of the dogs. The strategy is now being tried elsewhere in Victoria, in hopes of protecting other indigenous species from non-native predators. 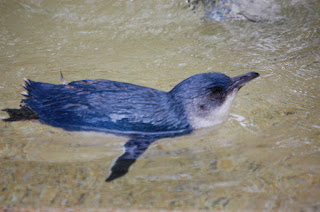 We visited a site south of Melbourne to watch the Little Penguins come in one evening. It was pretty amazing, but I can see how it would be a banquet for a moderately competent carnivore.


Maremma dogs are self-reliant; they can be left to defend a patch of land for long periods of time with a supply of food and water that they know not to wolf down right away. During the summer, when foxes pose the greatest danger to Middle Island’s penguins because of tidal patterns that form sandbars, the dogs can stay on the island for several days in a row, watching over the birds from a raised walkway.

Training them for the job involves introducing them to the penguin’s distinct odor. “Penguins don’t smell particularly nice,” said Peter Abbott, manager of tourism services for the Warrnambool City Council. “They look cute and cuddly, but they smell like dead fish.” Gradually, the dogs are taught to treat the penguins like any other kind of livestock, to be defended and not harmed.

Speaking of self-reliant, everyone should watch Eight Below, the semi-fictional story of 8 sled dogs (played in the movie by Siberians and Malamutes) stranded for a winter in Antarctica. It is rather loosely based on true events, when a Japanese team was forced to leave behind a sled dog team:


The 1958 ill-fated Japanese expedition to Antarctica inspired the 1983 hit film Antarctica, of which Eight Below is a remake. Eight Below adapts the events of the 1958 incident, moved forward to 1993.In the 1958 event, fifteen Sakhalin Husky sled dogs were abandoned when the expedition team was unable to return to the base. When the team returned a year later, two dogs were still alive. Another seven were still chained up and dead, five were unaccounted for, and one died just outside of Showa Station.