Clinton.com: Huma in the News

Has it really only been two days? Time flies, or at least waddles 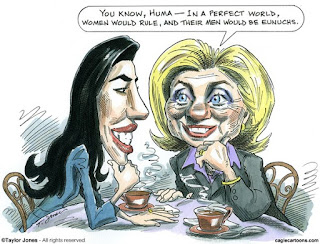 Who’s been leaking info about Huma Abedin to the Judiciary Committee?


There’s been plenty of information on Huma Abedin coming out of the various investigations into Hillary Clinton’s time as Secretary of State. These have ranged from the recent revelation that she had signed and then defied her separation agreement to the earlier finding that the OIG for State had determined there was an embezzlement case against her which Justice later conveniently declined to prosecute. But where was all of that info coming from? That’s what Harry Reid would like to know and he thinks there’s a leak in the system somewhere. (The Hill)


Frustrated with one of his colleagues, Sen. Harry Reid (D-Nev.) picked up the phone late last month to express his irritation.
The minority leader wanted to know why Senate Judiciary Committee Chairman Chuck Grassley (R-Iowa) was blocking nearly two dozen State Department nominees over work done by Huma Abedin, a longtime senior aide to Hillary Clinton…
The Iowa senator has publicly said he has a “confidential source” helping his investigation of Abedin.
Democrats claim they know who that source is and are accusing the State Department Office of Inspector General (OIG) of leaking information to Grassley about Abedin. They say the source is Emilia DiSanto, a former Grassley aide who is now deputy director of the State Department OIG.

So is DiSanto the insider who is telling tales out of school? She denies it categorically thus far and Grassley seems to indicate that there are plenty of other sources inside the State Department. But the real question here seems like it should be… who cares? We’re not talking about somebody leaking national security secrets to the press here. It’s a case of a Senate committee looking into a pertinent matter of legislative oversight getting information from the agency under discussion. Nobody seems to be disputing the authenticity of the information. The separation agreement document actually exists. It bears the former employee’s signature and appears to clearly have been violated. As for the Inspector General’s report on Abedin’s pay, that’s simple payroll records. Really nothing in dispute there beyond the fact that the Obama Department of Justice didn’t see fit to pursue a case involving the embezzlement of taxpayer funds.

Reid should be familiar with the concept of leaks; he was the person who claimed to have been leaked Mitt Romney's tax returns.

I don't see the big deal. Both parties fear the policies of the other side, and are not afraid to say so, and even exaggerate (and lie) to make the point. 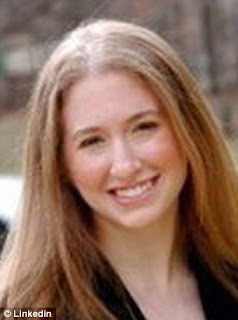 Hillary and the mystery of the vanishing woman who decided which of her emails were to be erased: Key aide has not taken up expected campaign role


Heather Samuelson was the Clinton aide who was tasked to go through the former secretary of state's emails and then, later on, was to take a job with the 2016 campaign.

But, according to Politico, Samuelson made the move – from Washington, D.C. to New York, as Clinton's campaign is headquartered in Brooklyn –  but never started her campaign job.

'She moved to Brooklyn to work on the campaign, but then things got really complicated,' a friend of Samuelson's told Politico, asking to not be named.

According to Politico, Samuelson was supposed to work for the campaign and vet senior level hires.
. . .
Her role in the ongoing Clinton email scandal is once again being highlighted because Senate Judiciary Chairman Chuck Grassley, R-Iowa, sent her a letter last Wednesday asking about her security clearance.

'It is not clear what level of security clearance you had at the different stages of this process, if any,' Grassley wrote, referring to the email sorting.

The Iowa senator mentioned how the FBI took the emails out of the hands of Clinton's attorney Kendall, who had a Top Secret clearance issued through the State Department, because even that level was 'insufficient to allow him to maintain custody of the emails,' Grassley explained.

I'm sure she still draws a full salary, and then some, from the Clinton.com money machine.

Patriarchal Sexists for Clinton! Hillary’s Hollywood Posse Says Take Off Your Shirt, Starlet (But Step Away From the Director’s Chair)


That's right: Hillary Clinton's Hollywood posse is an old-boy's network that openly discriminates against women. Or, so says the liberal columnist at the liberal New York Times.


From 2007 through 2014, according to Smith’s research, women made up only 30.2 percent of speaking or named characters in the 100 top-grossing fictional films.
But the most wildly lopsided numbers have to do with who is behind the lens. In both 2013 and 2014, women were only 1.9 percent of the directors for the 100 top-grossing films. Excluding their art-house divisions, the six major studios released only three movies last year with a female director. It’s hard to believe the number could drop to zero, but the statistics suggest female directors are slipping backward. Prof. Martha Lauzen of San Diego State University reports that in 2014, 95 percent of cinematographers, 89 percent of screenwriters, 82 percent of editors, 81 percent of executive producers and 77 percent of producers were men. -- Maureen Dowd, The New York Times Magazine

Apparently the men who lead most studios channel their inner 15 year old when hiring directors. They allegedly look for edgy hipster manboys who remind them of their younger selves. 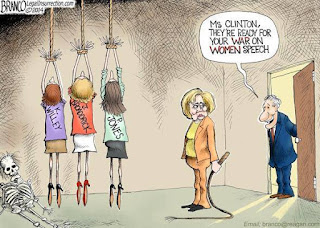 
In one of her first media appearances in nearly a decade, Juanita Broaddrick, the woman who famously accused Bill Clinton of rape, is now speaking out against Hillary Clinton’s candidacy for president.

“Shame on you, Hillary, that’s disgusting,” Broaddrick said of Clinton’s attempt to run for high office in part on women’s issues. “Shame on you, Hillary. It’s time to be truthful,” she added.
. . .
During the exchange with Klein, the notoriously media-shy Broaddrick accused Clinton of complacency in covering up her husband’s alleged sexual crimes and indiscretions.

“I think she has always known everything about him. I think they have this evil compact between the two of them that they each know what the other does and overlook it. And go right on. And cover one for the other,” she said.

She recalled a personal meeting with Hillary in 1978, in which, Broaddrick believes, the future First Lady strongly implied the alleged rape victim must stay silent about her traumatic experience.
. . .
“You have the right to be heard. You have the right to be believed. We’re with you,” Clinton said in the video, which she addressed to “every survivor of sexual assault.”

Broaddrick responded: “Aaron, the only thing that I would like to say is I hope that someday these two people, these people that I feel like are so evil, will be brought to justice.”

Clinton and former businesswoman Carly Fiorina would tie with 42 percent each.

I know, I know, Faux News and all, but still I think Hillary's oily sheen is wearing thin.

And never one not to hit a woman when she's down:  Trump posts video of Clinton laughing over Benghazi flames