There is a theory about snow in Siberia during the month of October: If there is a lot, it can mean a particularly wicked winter in the northeast United States.

Last month, Siberia experienced record snowfall and the worst blizzard in a decade.

Above-average snow cover in Siberia is believed to affect the now-famous polar vortex and send bitterly cold temperatures to the Northeast. This happens when the Arctic Oscillation, a climate pattern, shifts.

When its winds are strong, the Arctic Oscillation keeps a tight hold on temperatures swirling around the North Pole. When it becomes weakened, or what meteorologists call “negative,” it allows arctic air masses to creep into the mid-latitudes.

Above-average Siberian snow cover points to a negative oscillation pattern. But not always. And it is especially not certain that will happen this winter. Myriad factors, not the least of which is the strong El Niño being experienced globally, come into play.

Atmospheric and Environmental Research scientist Judah Cohen, who tracks the Arctic Oscillation and its correlation to U.S winters, wrote on his blog: “It is challenging to anticipate how the final outcome of competing forcings from the tropics and the high latitudes will influence mid-latitude weather.”

Predicting is hard, especially the future. . . So when can you expect your first snow? 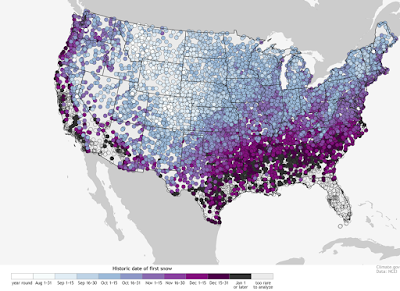