Over four decades of public life, Bill and Hillary Clinton have built an unrivaled global network of donors while pioneering fundraising techniques that have transformed modern politics and paved the way for them to potentially become the first husband and wife to win the White House.

The grand total raised for all of their political campaigns and their family’s charitable foundation reaches at least $3 billion, according to a Washington Post investigation. 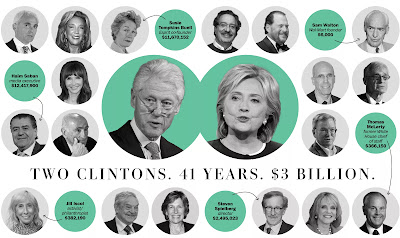 The Post identified donations from roughly 336,000 individuals, corporations, unions and foreign governments in support of their political or philanthropic endeavors — a list that includes top patrons such asSteven Spielberg and George Soros, as well as lesser-known backers who have given smaller amounts dozens of times. Not included in the count are an untold number of small donors whose names are not identified in campaign finance reports but together have given millions to the Clintons over the years.

The majority of the money — $2 billion — has gone to the Clinton Foundation, one of the world’s fastest-growing charities, which supports health, education and economic development initiatives around the globe. A handful of elite givers have contributed more than $25 million to the foundation, including Canadian mining magnate Frank Giustra,who is among the wealthy foreign donors who have given tens of millions.

And she'll never have to worry about paying for a hotel room, or a plane ticket, or an email server ever again. . .


After delivering a speech today on combating ISIS and winning the war on terror, Hillary Clinton will head off to a fundraiser in New York City — but it might have some negative impact in New Hampshire, at least among NFL fans. The law firm organizing the fundraiser, John DiStaso reports for WMUR, conducted the investigation into “Deflate-Gate,” the scandal involving the New England Patriots that almost found its star quarterback benched for the first four games this season. Will Pats fans and Tom Brady supporters in the Granite State throw a flag on this play?


The law firm whose report led NFL Commissioner Roger Goodell to suspend Tom Brady for four games (since overturned in court, of course) is hosting a fundraiser Thursday afternoon in New York City. The guest of honor: Hillary Clinton.
Clinton, of course, is a former U.S. senator from New York. We’ve never heard her espouse her football loyalties (except for backing a resolution honoring the New York Giants after they beat the Patriots in the 2008 Super Bowl).
The fundraiser is being held at the firm of Paul, Weiss, Rifkind, Wharton & Garrison LLP, in the Big Apple, with the cost per person at $2,700.
The firm was hired by the NFL to conduct the investigation into the alleged improper deflation of footballs used in the AFC championship game last Jan. 18.

As long as there is influence to peddle and money to be made doing it, Hillary is in.

Hillary can’t run from the messes she — and Obama — made


Hillary Clinton’s speech Thursday was billed as her plan to combat the Islamic State. In truth, her plan was to combat the idea that she is another Barack Obama.

It was a good try, but she failed because, as boxing great Joe Louis once said about an opponent, “He can run, but he can’t hide.”

Clinton can run from Obama, but can’t hide from the unholy mess he — and she — made.

As his first secretary of state, she was part of the team that botched the wars in Iraq and Syria and helped birth the Islamic terrorism now rattling the world. The slaughter in Paris and fresh threats against America make it urgent that she erase her fingerprints from the calamity. That’s impossible, so she settled for putting some daylight between herself and Obama.

“Our goal is not to deter or contain ISIS, but to defeat and destroy ISIS,” she said.


Clinton spoke at the Council on Foreign Relations in New York City on Thursday, laying out her strategy for defeating ISIS and retaking large swathes of Iraq and Syria from the clutches of the deadly terrorist group. Afterward, she participated in a Q & A moderated by CNN’s Fareed Zakaria.

“Do you believe that President Obama underestimated ISIS when he called it the JV team?” Zakaria asked.

“I don’t think it’s useful to go back and re-plow old ground,” Clinton said. “I think from the perspective of what they had accomplished at that time, even though they had seized and held territory, the major focus of our government was on trying to remove Assad from power so that there could a be a resolution, a political resolution.”

After ISIS captured Fallujah, Iraq in early 2014, President Obama was pressed to explain why the United States seemed to have been caught unawares. “If a JV team puts on Lakers uniforms that doesn’t make them Kobe Bryant,” he told New Yorker editor David Remnick.

Well, clearly it was because the secretary of State was doing such a bang up job.

And finally courtesy of Smitty at The Other McCain the Taiwanese animators take on Hillary.