And sometimes twice: Expedition To Study Global Warming Put On Hold Because Of TOO MUCH ICE 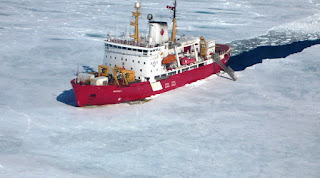 An expedition to study the effects of global warming was put on hold Wednesday. The reason? Too much ice.

The CCGS Amundsen, a Medium Arctic icebreaker and Arctic research vessel operated by the Canadian Coast Guard, was to travel throughout Hudson Bay, a body of water in northeastern Canada, but was rerouted to help ships who were stuck in the icy water.

“Obviously it has a large impact on us,” says Martin Fortier, executive director of ArcticNet, which coordinates research on the vessel. “It’s a frustrating situation.”

ArcticNet is a network of scientists who study “the impacts of climate change and modernization in the coastal Canadian Arctic.”

The vessel is one of only two icebreakers in the Arctic, leaving the ship obligated to reroute their travel plans to help break ice for resupply ships.

I'm sure this will be widely discussed at the Paris Climate Conference.
Posted by Fritz at 8:01 AM