More than 100,000 fish have gone belly-up in the Middle River area of eastern Baltimore County in what state environmental officials are calling the biggest fish kill of the year.

The Maryland Department of the Environment said Friday it's still investigating the cause of the die-off, which began this week. But preliminary findings suggest the fish were poisoned by a toxin produced by algae, spokesman Jay Apperson said.

The toxin does not harm people or other animals, he said.

Among the species killed were largemouth bass, yellow perch, bluegill, crappie, sunfish, carp and Atlantic menhaden, Apperson said. They were found in the upper Middle River and in several tributaries, including Norman, Hopkins and Dark Head creeks.
. . .
Apperson said the department received reports of dead fish as early as Monday and visited the area three times during the week to collect water samples and fish tissue. Analysis of the water found a type of harmful algae, Karlodinium veneficum, in high enough numbers to produce a toxin capable of harming fish.

Karlodinium blooms typically occur in late spring or summer. Apperson suggested warm weather this fall may have allowed the algae to survive and grow, while recent drops in water temperature could have triggered its demise.
. . .
Apperson noted that excessive levels of the nutrients nitrogen and phosphorus can lead to algae blooms. Middle River and all of the Chesapeake Bay are afflicted with an overdose of those nutrients from wastewater treatment plants and from rainfall washing fertilizer, animal waste and other organic material off farmland, lawns, streets and parking lots.

Yes, I'm sure the vast grain fields and chicken farms of Baltimore County were responsible . . . 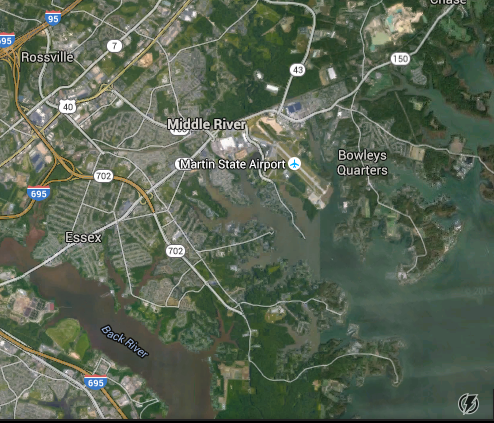