Fallout from the democratic debate.

So stop and think about this one a minute. In Saturday's debate, Hillary claimed she took big campaign money from big banks because of 9/11. . .


The most bizarre part of the entire evening, however, had to be when Sanders challenged Clinton about all the Wall Street money she’s taken. She launched into an answer which invoked 9/11 and how proud she was to help them rebuild after the attacks.

At that point I was just staring at the television screen speechless. I was sort of hoping that Dickerson’s next question would be whether or not Hillary was smelling burnt hair at the moment because it sounded as if she’d had a stroke. I clearly wasn’t the only one, either. The bizarre, rambling 9/11 answer led to jaws dropping all over Twitter (you can see a list from the RNC here) including the Daily Beast. . .

Of course, she was taking money from big banks and using her senatorial powers to shovel them money even before 9/11. So maybe she knew it was coming? I know if she were Republican, that would be the accusation.

After the fact, she, or at least one of her important consiglieres must have realized the optics sucked, because she started walking it back, to the small extent that she can be shamed.


When Clinton raised Wall Street donations along with 9/11, her Democratic rivals quickly bounced. In the post-debate "spin room," former Maryland Gov. Martin O'Malley told reporters, "I'll let her answer that gaffe. I think it was one of the biggest ones of the night."

Mark Longabaugh, a top Sanders' adviser, said, "Do I think it's a legitimate defense? No. I don't see how you can make those two pieces go together." He called the exchanges over Wall Street the "pivotal moments of the debate."
. . .
"It's an intersection between stupid and offensive, and I think that's going to be a big problem as the campaign heads into the general election," said Sean Spicer, the Republican National Committee's chief strategist.

Even "body girl" Huma acknowledges that Hillary is often "confused". 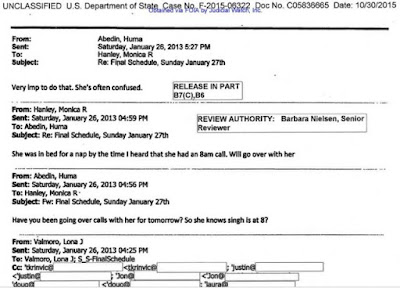 That's what we need; a president who is commonly "confused."

Washington Post's Glenn Kessler fact checks Hillary's claim that 95% of her email was archived because it was sent to State Department addresses, and awards it three Pinocchios, just short of a flat out 4 Pinocchio whopper. Applying the Washington Post fudge for favoring Democrats, that amounts to 5 on a scare of 4.

The AP has fact checked Ms. Clintons claims on guns, and is even less impressed with her veracity:


CLINTON: "Since we last debated in Las Vegas, nearly 3,000 people have been killed by guns. Two hundred children have been killed. This is an emergency." She said that in the same period there have been 21 mass shootings, "including one last weekend in Des Moines where three were murdered."

THE FACTS: The claim appears to be unsupported on all counts.
The Gun Violence Archive has recorded 11,485 gun deaths in the U.S. so far this year, an average of just under 1,000 per month, making Clinton's figure appear to be highly exaggerated. The archive had more detailed data for children and teenagers, showing 70 from those age groups killed by firearms since the Democratic candidates debated Oct. 13 - not 200 as she claimed.

Asked to explain the discrepancy, Clinton's campaign pointed to 2013 statistics from the Centers for Disease Control and Prevention and 2010 figures from the Children's Defense Fund. But that's not the time period she said she was talking about.

The only mass shooting recently in Des Moines was Nov. 8, when four people were shot at a night club. One was killed, not three.

Make that an old, confused, liar.
Posted by Fritz at 4:19 PM