A report from the WAPO on the standoff between NOAA and the Congress over emails which might shed light on their motives: Standoff over government climate study provokes national uproar by scientists


A top House lawmaker’s confrontation with government researchers over a groundbreaking climate change study is provoking a national backlash from scientists, who say his campaign represents the most serious threat Congress has posed to scientific freedom.

Rep. Lamar Smith (R-Tex.), chairman of the House Committee on Science, Space and Technology, has subpoenaed scientists at the National Oceanic and Atmospheric Administration and demanded that they turn over internal e-mails related to their research. Their findings contradicted earlier work showing that global warming had paused, and Smith, a climate change skeptic, has accused them of altering global temperature data and rushing to publish their research in the June issue of the journal Science.

The study in question, get this, "corrected" global temperature readings for the fact that old sea surface temperature readings were taken with a bucket and a thermometer, which would usually change slightly after collecting the bucket and while the thermometer settled. The adjustment, a few hundredths of a degree centigrade, applied over the right interval, we enough to "bust the pause" in temperature rise in the last 20 years and produce an upward slope, just in time for the upcoming Paris Climate conference. Never mind that the more comprehensive and reliable satellite temperature measurements show no increase in temperature over the same period. 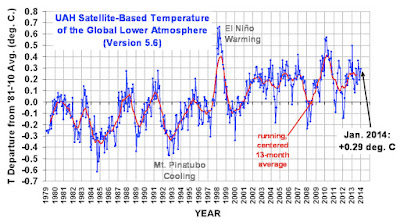 [NOAA chief tells lawmaker: No one will ‘coerce the scientists who work for me’]

No one should have to coerce the scientists for their emails. NOAA has them in giant searchable servers already. Your geeks could produce the relevant emails in a few days; though it might take longer to sort the useful from the useless.


So far, NOAA officials have resisted Smith’s demands, and the showdown has escalated.
The lawmaker has threatened to subpoena Commerce Secretary Penny Pritzker, while scientists have rallied in solidarity with the researchers.

On Tuesday, seven scientific organizations representing hundreds of thousands of scientists sent an unsparing letter to Smith, warning that his efforts are “establishing a practice of inquests” that will have a chilling effect. . .

As a scientist I was twice involved in studies for the Smithsonian where we were specifically told to preserve all of our emails relating to a project because they might become targets of a lawsuit. It's absolutely not unheard of for scientists emails and other papers to be sought for evidence of motive. Just ask Willie Soon.

The fact that the scientists and NOAA are so determined to keep their internal deliberations hidden suggests they have something to hide.
Posted by Fritz at 9:32 AM