In a pre-dawn raid reportedly aimed at the mastermind of the Nov. 13 terrorist attacks in Paris, at least two suspects were killed and five arrested in the suburb of Saint Denis. CNN initially reported three suspects had been killed, including one female who blew herself up with a bomb, during the raid targeting Abdelhamid Abaaoud, suspected of organizing the Paris attacks. The Washington Post reports:


Gunshots and explosions rang out from the northern suburb of Saint-Denis early Wednesday as more than 100 French police and army troops laid siege to an apartment with at least six terror suspects, potentially including the alleged ringleader of Friday’s deadly attacks in Paris.
The narrow streets of Saint Denis were clogged with police vehicles and ambulances as witnesses reported multiple explosions. The operation began around 4:30 a.m. [11:30 p.m. ET], and left several police officers wounded and at least two suspects dead. The dead included a woman who blew herself up, according to the Paris prosecutor’s office.
The prosecutor’s office said three men were removed from the besieged apartment block and taken into custody. Their identities were not given. A man and a woman were arrested next to the apartment and also taken into custody. One suspect appeared to be still holed up.

While I'm sorry that French police were hurt in the raid, what's really sad is according to BBC reports a Belgian Malinois name Diesel working with the French Police was killed in the explosion: 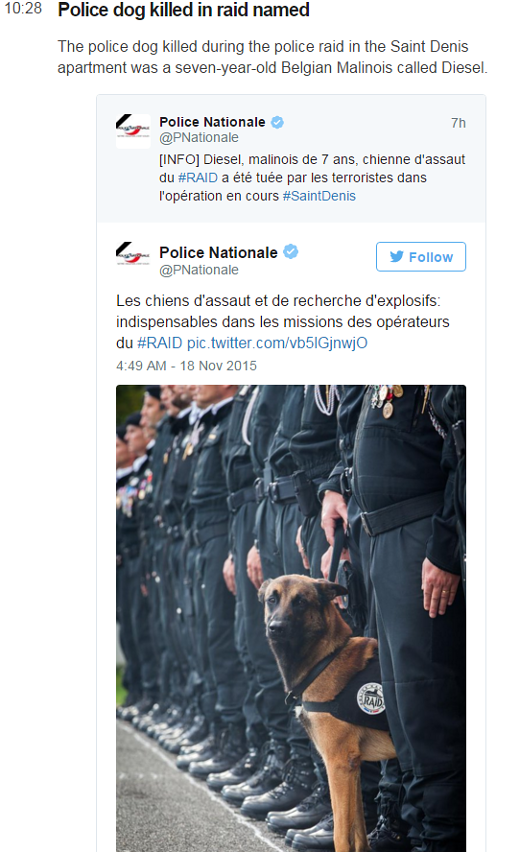 It's good to see someone taking the problem of Islamic terrorism seriously.
Posted by Fritz at 12:47 PM