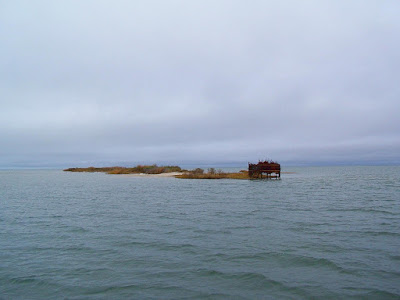 Got the call to go commercial fishing with Walleye Pete this morning. The usual suspects met at the usual place around the usual time, and headed off across the Bay. It was rainy and windy last night, but the NE wind left the islands calm and clear, and what wind was left in the dawn faded. Clouds and occasional showers lasted 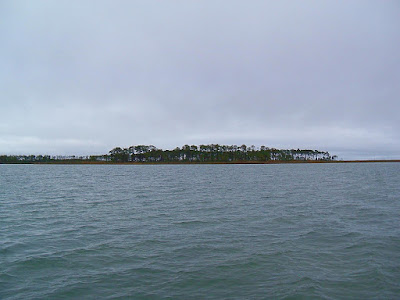 We started fishing around Hoopers Island, where there was decent top water bite. Mike and I developed a modified "pop and swap" routine. I'd rile a fish up with the Zara Spook, and the ones I didn't hook up would pick up Mike's jig. 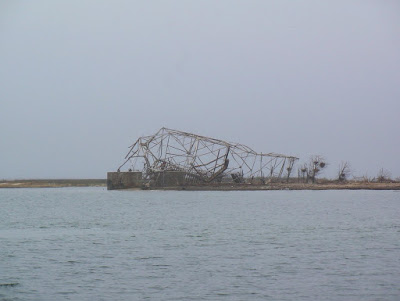 Down the shores of Bloodsworth Island. Most places we stopped were good for a keeper or 5. Fog started building in.. . . 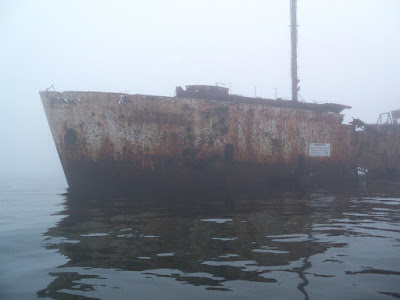 And by the time we got to the Target Ship, it was pretty thick and visibility was down to a tenth of a mile. Thank goodness for modern electronic. Mike, a former marine pilot said that he had shot some of the holes in the ship using an F-14. He pointed to the holes about 1.5 inches across.

I didn't realize it was a Liberty Ship until just now. My dad spent time on the Liberty Ships in WWII in the Merchant Marine.


She appears to have been the only ship to have served in the U.S. Coast Guard, the U.S. Army, the U.S. Air Force and the U.S. Navy after being built for service with the United States Merchant Marine. 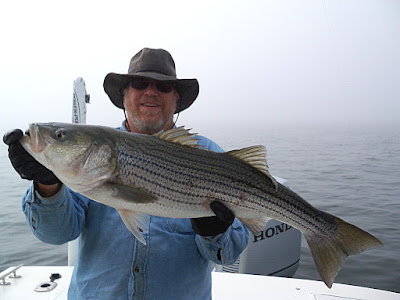 Many large fish were caught. Everyone aboard caught multiple fish near the 36 upper limit for commercial fish. At some point, Pete asked us to start throwing back the smaller keepers to make room in the coolers for the large ones that get a better price at the dock.

It was utterly epic fishing.
Posted by Fritz at 7:57 PM