I Guess He Didn't Like the New Living Arrangements 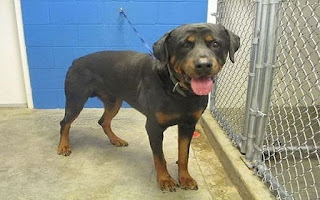 Anthony Riggs was attacked by a five-year-old male Rottweiler that had been taken in by a county-run animal control facility.

"He never hesitated to be with dogs. Sometimes I thought he related to dogs better than to people," his ex-wife Adrienne Riggs told the Jackson Sun.

"Tony was a good man and a loving man and a good person with animals and he didn't deserve to die the way that he did."

She added: "A docile dog does not turn in three hours and kill somebody. Something was wrong. You just can't put a dog that may be dangerous out with an unsuspecting family. That's just wrong."

His wife Kathy Riggs told police she found him dead on the floor after returning home with colleague Teresa Sanchez.

The canine bit both of the women before running out of the house explained Ms Sanchez. Police then arrived and shot the animal.

"He wasn't growling or showing teeth - he just bit us like he did it all the time or something," she wrote on Facebook.

I just hope Skye doesn't read this and use it to argue for more and longer walks.

Found at Althouse.
Posted by Fritz at 5:00 AM