The ex-State Dept IT guy who promised to take the 5th if taken before the Senate Committee on Benghazi (or any other committee for that matter, turns out to have had an interesting resume'.


Pagliano had served as the IT director of Clinton’s 2008 presidential campaign and then worked for her political action committee.

The Clintons paid Pagliano $5,000 for “computer services” prior to his joining the State Department, according to a financial disclosure form he filed in April 2009.

One get's the sense that State hired him at the Clinton's request, with the unstated purpose of maintaining the Clinton.com servers, which as we have previously seen also served as the email server for the Clinton Foundation. I would guess he probably handled the internet service as well.


But even after arriving at State in May 2009, Pagliano continued to be paid by the Clintons to maintain the server, which was in their Chappaqua, N.Y., home, according to the campaign official and another person familiar with the arrangement. That person spoke on the condition of anonymity because the matter is under investigation.

I wonder if he was located in or near Chappaqua, rather than at the State Dept in Washington? That would make it clear what his real value to the State Dept. was.


The private pay arrangement has not previously been reported. The State Department has declined to answer questions about whether the private system was widely known within the agency or officially approved.

Asked in early August about whether Pagliano had been paid privately to maintain the server, a State Department official said that the agency had “found no evidence that he ever informed the department that he had outside income.”

Ooops.  Even in my limited experience in the much less secret squirrel world of the Smithsonian, I know you're supposed to at least check in with the "bosses"  to make sure that any outside income does not come with a conflict of interest.

Pagliano did not list the outside income in the required personal financial disclosures he filed each year. The State Department has said Pagliano concluded his full-time service in February 2013, which coincides with Clinton’s departure as secretary. He remains a State Department contractor doing work on “mobile and remote computing functions,” according to a State Department spokesman.

It's pretty clear he was taken on to serve Hillary. Now that isn't necessarily wrong (high level people often bring their own secretaries and aides and other retainers), but it does seem to argue that much of the cost of the Clinton.com internet and email system (part of which, remember, is a private foundation) was being paid for by State Dept. I would guess that's illegal. If not, it should be.

I know, you're surprised. 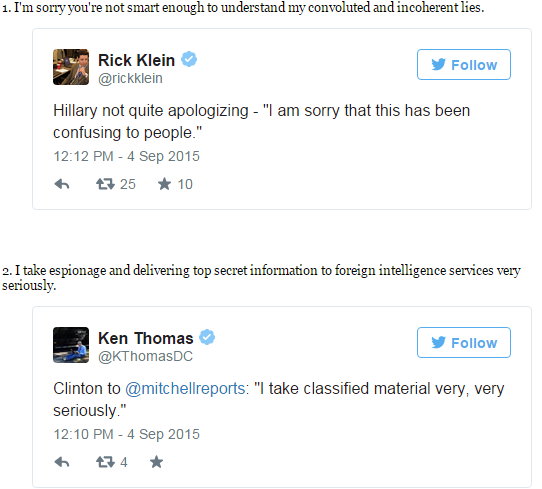