Report: Blue crab populations up but not enough


An improving Chesapeake Bay Blue Crab population isn't being overfished, but growth targets still need to be met in the coming years, according to a report released Wednesday.

The female crab population is no longer depleted, an improvement over the last eight years where populations were at or below the target. 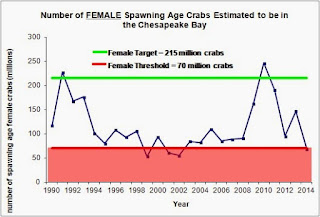 But experts cautioned estimated winter mortality is "some of the highest in recent history." An estimated 15 percent of the blue crabs in bay were killed during the winter.

"While the juvenile and female crab populations did increase from the previous year, the number of juveniles can vary greatly from year to year because of numerous variables in the environment," said Joe Grist, chair of the Chesapeake Bay Stock Assessment Committee.

Scientists recommended that jurisdictions consider a year-round sanctuary for mature females to promote their survival, according to a Chesapeake Bay Program news release.

Maryland Department of Natural Resources officials said they have several efforts to maintain crab populations. Mature females are regulated with daily bushel limits and there are time limits on watermen crabbing in the bay.

Crab populations are notoriously variable, and the sources of the variation are not clear but weather and climate factors are thought to play a role. We haven't had a really good year for a while, so additional harvest restrictions are in order.
Posted by Fritz at 5:46 PM