Another nice day here in Slower Maryland.  Doing this one quick to get outdoors. Not that there's too much.

We Deserved Better Than Kathleen Sebelius: We should expect at least as much out of our government as we do out of a gadget maker. 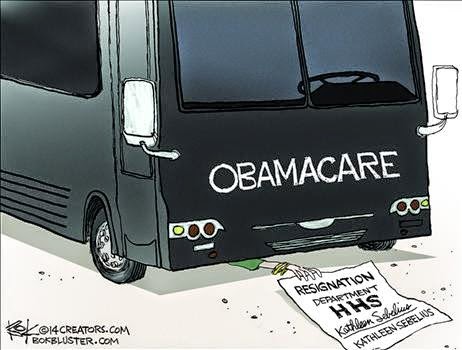 Last fall, when Healthcare.gov went live and crashed again and again, Sebelius’s response was not to take responsibility or explain why the job was botched so badly but to plead for slack from customers. “Hopefully [website users will] give us the same slack they give Apple…. If there’s not quite the operational excellence right away, we’ll continue to press for that,” she told the press. “Apple, you know, has a few more resources than we have to roll out technology, and a few more people who’ve been working on the system for a while, and no one is calling on Apple to not sell devices for a year or to, you know, get out of the business because the whole thing is a failure.”

That reaction helped to explain why HHS botched the job so badly to begin with. The government spent upwards of $677 million on the design and implementation of Healthcare.gov, so Sebelius’s claim wasn’t just misleading but strikingly out of touch with reality. The fact is that if Apple put out rotten products year after year without changing things, they would be out of business, as the rotting hulks of once-giant bankrupted companies can attest. That President Obama parroted the same line didn’t help matters.

As the Healthcare.gov debacle continued, Sebelius also claimed that it took her a while to break the news to President Obama that the website was buggier than the a porch light on a summer evening. Despite the lack of extensive tests that commercial operations run on sites before they go live, Sebelius told CNN that the president had no warning that the site was up to its challenges. That helped to explain the president’s weak response to the debacle but hardly excuses either his or his secretary’s actions.
. . .
Sebelius’s abrupt resignation, then, is the fitting capstone of a cabinet tenure that did nothing to inspire feelings of competency and trust in government in a century that is so far replete with revelations of bipartisan secret surveillance, financial mismanagement of the nation, and failed foreign policy.

We deserved better than Kathleen Sebelius. And we should demand more from our public officials with the same vigor we do when buying, say, Apple products.

Via Ann Althouse: Obama hugs Sebelius. But check out the look on his face. 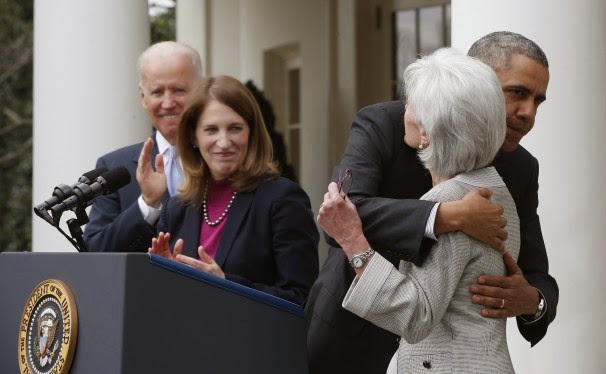 Looks a little like Tony Soprano giving a failed henchmen the Sicilian kiss off.


So far, the victory lap taken by Barack Obama after the end of ObamaCare open enrollment hasn’t impressed anyone, at least according to the latest Gallup survey. Approval of the law ticked up within the margin of error since the last survey in March, but disapproval remains near its peak:


Basically, we still see stasis despite the self-congratulation of last week, which preceded the survey dates (April 7-8). The departure of Kathleen Sebelius isn’t likely to impact this one way or the other. Republicans dislike the law as much as ever, while

Democrats may be rallying around it a little bit. The view among independents appears to have worsened slightly, as only 17% think it will make their own lives and those of their family better, as opposed to 39% who think it will make it worse, after a 20/38 reading from the beginning of March. And remember what it is the Socialists Democrats really want: Vermont's Single-Payer Dream Is Taxpayer Nightmare  Megan McArdle takes on the one true "single-payer" insurance plan in the US.


Of the plans that states have hatched for the Affordable Care Act, none has been bolder than that of Vermont, which wants to implement a single-payer health-care system, along the lines of what you might find in Britain or Canada. One government-operated system will cover all 620,000 of Vermont’s citizens. The hope is that such a system will allow Vermont to get costs down closer to Canada’s, as well as improve health by coordinating care and ensuring universal coverage.

Just two small issues need to be resolved before the state gets to all systems go: First, it needs the federal government to grant waivers allowing Vermont to divert Medicaid and other health-care funding into the single-payer system. And second, Vermont needs to find some way to pay for it.

What, won't the Chinese loan Vermont the money?


Although Act 48 required Vermont to create a single-payer system by 2017, the state hasn’t drafted a bill spelling out how to raise the additional $1.6 billion a year (based on the state's estimate) the system needs. The state collected only $2.7 billion in tax revenue in fiscal year 2012, so that's a vexingly large sum to scrape together.

Vermont is a middling-tax state, as states go. And that’s not an accident; its population consists of longtime Vermonters, some of whom vote Republican (at least for governor) and are not super-tax-friendly, and transplants from Massachusetts and New York state, who, last time I looked, had moved to Vermont partly because the taxes were lower. Paying for this program would likely make Vermont the highest-taxed state in the nation, by quite a lot. 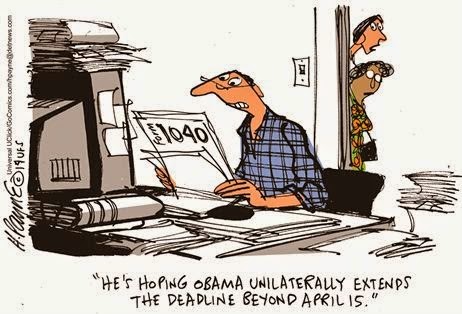 That would be quite a switch. Maybe Vermont could take Maryland's place in the race to tax more than Massachusetts.


Nor can you get much administrative saving at the provider level, because they still have to deal with out-of-state insurers quite a bit. And the once-vaunted fabulous savings from preventative care have mostly turned out not to exist. So this is going to be expensive. So expensive that I doubt Vermont is actually going to go forward with it.

This should be instructive for those who hope -- or fear -- that Obamacare has all been an elaborate preliminary to a nationwide single-payer system. It isn’t. The politics are impossible, and even if they weren’t, the financing would be unthinkable.