Ace has a truly epic rant against the tendency of our current administration, and by extension, the liberal establishment, who seems to think that Vladimir Putin can be repulsed in the Ukraine if shown sufficient disapproval in the form of tweets:

#Unseriousness: While Putin Plans for a Real War in Ukraine, Obama's People Are Focused Like Lasers on Winning the Only War That Matters, the Facebook/Twitter War — Ace


Before getting to the "Promise of Hashtag," let's be clear about the seriousness of this moment: Ukraine's deputy foreign minister said Friday he fears an imminent Russian invasion.


"We have the information we are in danger," Danylo Lubkivsky told reporters at the United Nations.
He spoke as an official in Ukraine confirmed that pro-Russian forces had detained a team of military observers with the Organization for Security and Cooperation in Europe. The official said the team would be released after further investigation.
The stakes are high.

How does Obama's Smart Power team meet this moment, as Russia threatens a military campaign to crush the Ukraine?

By waging a Social Media Campaign. 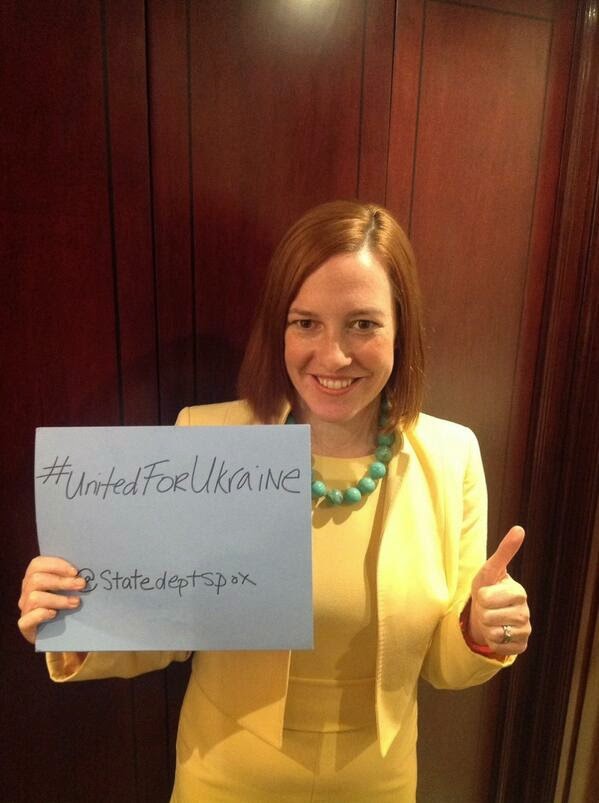 What signals does such a message send?

First, that Obama is not actually concerned with deterring Russia from invading Ukraine, but rather that he is only interested in being seen as being concerned about it.

If Putin didn't already know before (and frankly I doubt he didn't), this "response" by the U.S. State Department tells him that Obama has no permanent alliances, only permanent interests, and that permanent interest is pretending at strength for domestic political purposes.

He doesn't care what it means for the future or the world if Russia takes Ukraine. He only cares about what it might mean for the morale of his disciples and the November elections.

Obama is practically begging Putin to give him some sort of face-saving political cover to benefit Obama and Obama alone -- in exchange for which he'll let Putin have the Ukraine.

Actually, he'll let Putin have the Ukraine even if Putin doesn't offer him that. That's the "begging" part of it.
. . .
Can you imagine what a hard-headed, black-hearted old KGB spy thinks when he looks out at America and sees it conducting foreign policy via a time-wasting medium primarily popular with 12 year old schoolgirls?

This is exactly the sort of feeble (and feeble-minded) response that Reagan termed "provocative weakness."

It is better to be a weakling and say nothing at all than to open one's Twitter account and remove all doubt.

Update (AP): Actual quote from the State Department’s actual spokesman: “They have not been following their hashtag with actions.”

Ace has another rant worth reading on the Ukraine which posted immediately after this one: "F*** the EU," Revisited


"F*** the EU," top State official Victoria Nuland said on a phone call.
This phone call had been covertly recorded by Russia and was then leaked to the press, which should have been a signal that Russia, at least, was taking this more seriously than Obama's team was.


The F-bomb is deployed because Nuland’s frustrated that the EU isn’t doing more to pressure Viktor Yanukovych, the Putin-backed Ukrainian president whose recent deal with Moscow instigated the last few months of protests.

Why wasn't the EU doing "more" to pressure Yanukovych, Putin's choice for President?
Here's the thing: Because the EU was thinking hard about the Ukraine and realistically about itself.

And the EU knew this about themselves: They were not prepared to do a damn thing about a Russian invasion.

So the EU made a cynical, self-serving decision to not encourage or support the Maidan movement, because they knew they would not be doing anything down the road to support the Maidan movement when the movement actually needed support.
. . .
And what has the US done, by contrast?
We encouraged the Maidan protestors to hit the gas pedal on their revolution, but as Russia has done all the things that only a child could fail to predict that Russia would do, we have been surprised at every turn by the inevitable.

Now this got Obama some good press in February, back when supporting Maidan seemed like the right move for American Social Media Foreign Policy, and was, at that moment, a cost-free gesture.

But now the check is coming due, and what do we do to support the revolution we encouraged?

UPDATE: From Smitty at The Other McCain - Guess Which Clip Is The U.S. State Dept?
Posted by Fritz at 1:24 PM