Wow, Fimbulwinter just won't quit.  After yesterday's Obamacare Schadenfreude post, the rain began in earnest, and lingered all day, totalling about 1 inch.  As we got ready for bed, it switched to some form of snush and a little accumulated on the decks as an icy layer, where it remains wherever there is shade.  This morning is windy clear and blue and 35 F, in contrast to yesterday's cloudy, rainy and 65.

Meet the New Boss: Sebelius steps down, and ObamaCare supporters pretend to rejoice.

We observed in October that a new HHS nominee's confirmation hearings would subjectObamaCare to political scrutiny, which Democrats were understandably anxious to avoid. That's still true. "There are going to be some troublemakers who use the confirmation of the next person charged with overseeing Obamacare to raise hell, much as they did last fall, about the law," writes Scott.

The way we'd have put it is that critics will use the hearings to raise questions about ObamaCare. To stigmatize opposition lawmakers as "troublemakers" raising "hell" is reminiscent of the old Soviet Union, where dissent was labeled "hooliganism," a term that has come back into vogue in Vladimir Putin's Russia. . .

I hope some Republican has the temerity to ask about Vince Foster's trash.


(1) Now that [X weeks] have elapsed since the administration announced that 7.5 million Americans selected plans through the Affordable Care Act’s marketplaces, can you tell us how many of those people have paid their premiums, and are therefore covered? Was Sec. Sebelius’ comment that up to one-fifth of those “enrollments” may have been unpaid an accurate estimate? Can you tell us what percentage of the “newly” enrolled lacked coverage prior to the law’s implementation?* . . .

(2) Sec. Sebelius acknowledged that healthcare premiums will rise in 2015, but downplayed the increases as “far less significant” than they’ve been in the past. Has this administration abandoned the promise that “everybody” will see their health costs reduced by $2,500 “per family, per year” on average as a result of the Affordable Care Act? . . .

(3) An estimated 5.1 to 6.2 million Americans received cancellation notices from their existing coverage providers last year. Will any more Americans receive similar letters in the future? If so, can you estimate how many?

(4) Sec. Sebelius stated earlier this year that “there is absolutely no evidence” that the Affordable Care Act is having a negative impact on America’s employment picture. Do you accept the findings of a recent Congressional Budget Office report, which found that the new law is slowing growth and hiring, while substantially shrinking the US workforce? How much will the Affordable Care Act cost taxpayers between 2014 and 2023?

(5). . . In your role as OMB director, President Obama’s FY 2015 budget proposal was delivered more than one month past its statutory deadline — as were three of his previous four offerings (over which you did not preside). How did the process you oversaw fall so far behind schedule? Do deadlines matter?

(6) A former Obama administration spokesman recently stated that the Affordable Care Act’s twice-delayed employer mandate will “be one of the first things to go.” Does the executive branch have the legal authority to unilaterally delay, or even jettison, elements of a law that has been duly passed by Congress and signed by the president? What is the legal justification for the previous two postponements of the employer mandate, for instance?

(7) Our colleagues on the Democratic side of the aisle are talking a lot about “fixing” the Affordable Care Act. What are three significant fixes to the law you’d recommend to Congress?

(8) Is Medicare facing a solvency crisis? If so, what specific solutions does the budget you helped produce recommend to protect the program for future seniors?

(9) Via Marc Thiessen: Burwell was OMB director when Obama declared on Sept. 26, 2013: “Now, let’s start with the fact that even before the Affordable Care Act fully takes effect, about 85 percent of Americans already have health insurance — either through their job, or through Medicare, or through the individual market. So if you’re one of these folks, it’s reasonable that you might worry whether health-care reform is going to create changes that are a problem for you — especially when you’re bombarded with all sorts of fear-mongering. So the first thing you need to know is this: If you already have health care, you don’t have to do anything.” Burwell should explain to Congress and the American people how her office allowed blatant falsehoods to get into presidential speeches, including whether political aides overruled career policy advisers who warned that the president’s claims were untrue.

Only in Ace's inimitable style: Obama Administration: ObamaCare Is So Successful We're Going To Make Sure It's Impossible To Measure Just How Awesome It Is


You'd think that with all the victory laps Obama has been doing over hitting his numbers on "sign ups", whatever that means, he'd be eager to have hard data to back up his claims.
Surprisingly, that's actually not the case.


The Census Bureau, the authoritative source of health insurance data for more than three decades, is changing its annual survey so thoroughly that it will be difficult to measure the effects of President Obama’s health care law in the next report, due this fall, census officials said.
The changes are intended to improve the accuracy of the survey, being conducted this month in interviews with tens of thousands of households around the country. But the new questions are so different that the findings will not be comparable, the officials said.
An internal Census Bureau document said that the new questionnaire included a “total revision to health insurance questions” and, in a test last year, produced lower estimates of the uninsured. Thus, officials said, it will be difficult to say how much of any change is attributable to the Affordable Care Act and how much to the use of a new survey instrument. (underlining mine)

So look, you'll just have to trust Obama and people like Ezra Klein when they tell you all is well and ObamaCare is the best thing ever. You have a problem with that?


In Economist/YouGov polls conducted throughout March and early April, nearly half the public continued to call the law a failure, with less than half that number seeing it as more of a success, 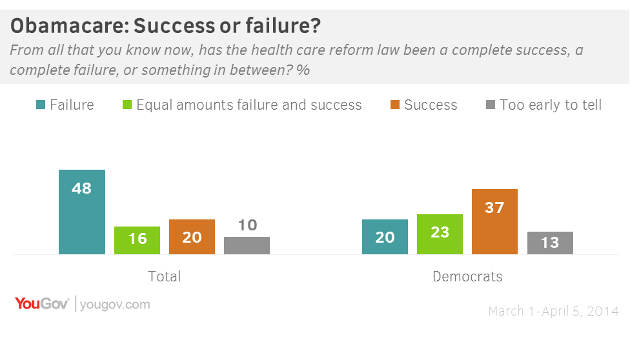 But what may be the biggest surprise in the data is the lack of improvement in evaluations of healthcare.gov by users. In the March and April polls, conducted after the website was functioning smoothly, nearly half of healthcare.gov visitors described their experience as negative. Less than a third said it was positive. And those who visited the website recently didn’t rate it all that much better than those who last visited in the site’s early, troubled days. Just under half of those who visited in February and March described their experience on the site as more negative than positive. That was somewhat lower than the negative assessments of those who last visited in October, when the website was pretty much non-functional, but no different from the response in other months.

I don't think the IRS or DMV got more popular with time either.

Ace had something to say about that too, in response to claims that it was all due to conservative domination of the news with negative stories about Obamacare:


Let's unpack this nonsense for a second.

I like how they pick March as the cutoff deadline for counting pro-ObamaCare ads. It lets him ignore all the money HHS spent promoting it prior to that. In ads. On TV.

It also ignores all the friendly media coverage people like him give it.

But mostly it ignores something very important. The reason candidates, Democratic campaign committees and PACs aren't running pro-ObamaCare ads is that it's unpopular and running on it would be suicide.

If simply buying ads would make the thing a winner for Democrats you can bet they'd be spending tons of money doing just that. They tried using taxpayer money (Happy Tax Day!) and failed.

But chin up Mark. Socialism will be popular someday, it just needs a bigger advertising budget.

CBO: ObamaCare premiums and healthcare spending will rise by less than expected, because…


Did you catch that? Let’s go straight to the report for a closer look:


A crucial factor in the current revision was an analysis of the characteristics of plans offered through the exchanges in 2014. Previously, CBO and JTC had expected that those plans’ characteristics would closely resemble the characteristics of employment-based plans throughout the projection period. However, the plans being offered through the exchanges this year appear to have, in general, lower payment rates for providers, narrower networks of providers, and tighter management of their subscribers’ use of health care than employment-based plans do. … (my underline)

To cut to the bottom of a long article, it's because the networks are narrower, the number of doctors smaller, and the service worse. Just like you'd expect the government to arrange.

And in another victory for privacy for the Obama administration: Feds Begin Fingerprinting 'High Risk' Medicare Providers and Suppliers


Four years after Obamacare became law, the Department of Health and Human Services (HHS) is notifying Medicare providers and suppliers of new fingerprint-based background checks. Eventually, all individuals who hold a five percent or greater stake in a Medicare supplier or provider that is categorized as "high risk" will be subject to the requirement. The provision is part of the Medicare, Medicaid, and CHIP Program Integrity Provisions (Title E) of the Affordable Care Act, and gives the HHS secretary broad discretion in applying the background check requirements depending on the potential for abuse, fraud, and/or waste.

The new requirements are spelled out in a document posted online on the website of the Centers for Medicare and Medicaid Services (CMS) last Friday. The new rules will apply to both current and future enrollees who are classified as "high risk," the stated purpose being to weed out "bad actors" in the Medicare program and prevent any more from enrolling.

How long before you have to be fingerprinted to get healthcare through the government (who will be the sole supplier)?