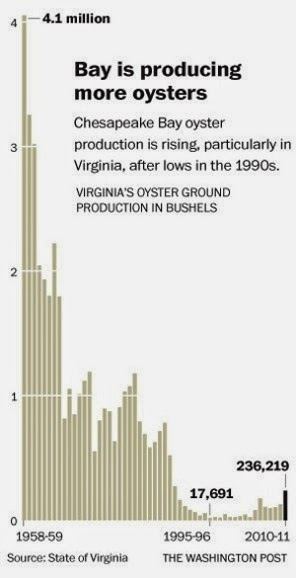 The number of oystermen cited or given warnings for having undersized oysters was at a five-year low this season, which some Maryland Department of Natural Resources officials said is the result of a particularly strong harvest.

There were so many full-size oysters in the Chesapeake Bay this year because 2010 was an exceptional reproductive year and there has been low disease mortality since then, said Michael Naylor, the shellfish program director at the Department of Natural Resources.

When the oyster population is high, fewer oystermen feel the need to harvest them when they’re still undersized, said Candy Thomson, a Natural Resources Police spokeswoman.

Naylor said the 2012-2013 harvest was about 340,000 oyster bushels and while this season’s numbers have not been fully tallied, officials expects the number to be significantly higher. Maryland oyster season runs from Oct. 1 to March 31.

About 10 years ago, the harvest brought only 26,000 bushels of oysters across the bay.

It's time to treat oysters in Chesapeake Bay as the endangered species they are.  Ban any fishing of wild oysters (allow aquaculture) and see whether the oyster populations still have the ability to recover to reasonable densities in 5 or preferably 10 years.
Posted by Fritz at 7:39 PM