Had breakfast and a Dr.s appointment this morning, and needed a nap before picking up the thread.  Not such a sterling day here, overcast and 40s.

Another Obamacare victim steps forth, ready to be called a liar by Harry Reid and the media:


A New York woman suffering from a neurological disease that has required four brain surgeries has been dropped by all of her doctors and denied medications due to her Obamacare plan.

"I've been vomiting. I lost 22 pounds. The pain is unbearable," said Margaret Figueroa, 49, on Wednesday. "My medication helps me function during the day." Figueroa suffers from a disease known as Arnold Chiari Malformation and Syringomyelia.

Even though the Obamacare plan she purchased assured her that she was covered, her insurance card was denied when she went to fill her prescriptions. Then she learned that none of her doctors accept her Obamacare plan. Figueroa says she cannot find a doctor who accepts her Obamacare plan; indeed, there are only six doctors in all of Staten Island who take her plan, none of whom she's been able to get appointments with.

"Even though the insurance company cashed your check, it doesn't mean it (the policy) has been implemented," said Grimm at a Wednesday press conference with Figueroa. "That's the problem – that the back end of Obamacare hasn't been fully built. You can go on the front end of an application and look at a list of plans, but what they don't tell you is that many of those plans don't have doctors yet."

And she is far from unique. A doctor calls it like he sees it:  The Doctor Won’t See You Now - Millions may get “insured” through Obamacare, but that doesn’t mean they’ll be able to see a physician.


Many Americans could lose their employer-provided insurance if firms decide that paying the ACA penalty—and maybe giving small raises to their employees—is cheaper than offering health insurance as a benefit of employment or reduce workers’ hours (the ACA does not mandate coverage for part-time employees). These newly uninsured workers will either have to enroll in Medicaid, if their income is low enough, or purchase a plan on one of the state and federal insurance exchanges. Those eligible for exchange subsidies may end up better off economically as their premiums will be so low, but both the exchange and Medicaid options are fraught with problems.

States are already struggling under huge budget deficits from their existing Medicaid programs. Since states lose federal funding if they adjust their Medicaid eligibility guidelines, their only option for reducing deficits is to cut already-low Medicaid reimbursement rates. Physicians are already reluctant to treat Medicaid patients under current rates that are a fraction of private and Medicare rates. Cutting reimbursements will exacerbate the physician-access problem and could lead to closures of so-called “safety-net” hospitals that care for many of the poor and uninsured. These hospitals have long depended on federal Disproportionate Share (DSH) payments to offset the cost of caring for the uninsured. But the ACA severely cuts DSH payments on the assumption that the uninsured will gain either Medicaid or private insurance. If large numbers of patients remain uninsured, safety net hospitals’ financial difficulties will be compounded by their obligation to provide uncompensated care.
. . .
Worst of all, insurance coverage under the ACA is unlikely to improve health outcomes. The much-noted Oregon Medicaid-expansion study found that new Medicaid enrollees showed no improvement in health outcomes compared with the uninsured. Other studies have shown that Medicaid patients have worse outcomes compared with privately insured patients (though why this happens is not well understood). The health outcomes of many exchange patients will suffer as a result of not being able to see their regular physicians or access the most appropriate specialists and hospitals.

The drafters of the ACA presumably had noble intentions, but the law is failing in all of its intended goals. Unless the ACA is redrafted to provide insurance coverage that most physicians and hospitals will accept, many patients will find that when they need medical care, the doctor is not in.

Joel Zinberg is associate clinical professor of surgery at the Mount Sinai Hospital in New York City and is a trustee and past president of the New York County Medical Society.

Obamacare victorious!  Widows and orphans hurt most! Dozens of Widows Dropped from Health Care Due to Obamacare in Alabama


"More than two dozen widows who were married to retired Madison county employees, lost their health insurance coverage earlier this year. And now one commissioner says it's time to give it back to them. The change was sparked by the new federal health care law, but whether or not coverage can actually be restored really isn't clear," said the anchor.

Says the reporter, "Madison county commissioner Roger Jones says no one realized just how much the new federal health care law would change things, especially for the spouses of some of his former employees."

For Obamacare, What Counts As Success?


Ezra Klein, in his new capacity as one of the impresarios behind Vox, has written a pair of attention-grabbing posts — here, and then here — defending the proposition that Obamacare has, in some sense, “won,” and that conservatives who can’t come to terms with that victory can’t come to terms with reality itself. Reading them, it struck me that this argument would benefit from laying down some specific markers for the near future, because Klein seems to move back and forth between two definitions of success. At times, as when he writes that Obamacare “has won its survival” and allows that that “there are still many good critiques to make” of the law, he seems to be using a narrow definition, with which I mostly agree — the law won’t collapse under its own weight, the enrollment levels are high enough to make a return to the coverage status quo ante unlikely, etc. But when he uses language like “the individual mandate … is working” and “the law is back on its expected track,” and concludes that ”[Kathleen Sebelius] can leave with the law she helped build looking, shockingly, like a success,” it implies a stronger definition of victory, in which Obamacare isn’t just continuing, isn’t just unlikely to be swiftly repealed, but is clearly succeeding as a policy in basically the way its advocates predicted that it would.

So I think it would be useful for the law’s supporters to specify the metrics/ numbers/ outcomes that would vindicate the latter claim. . .

Here is how Ross Douhat defines it: 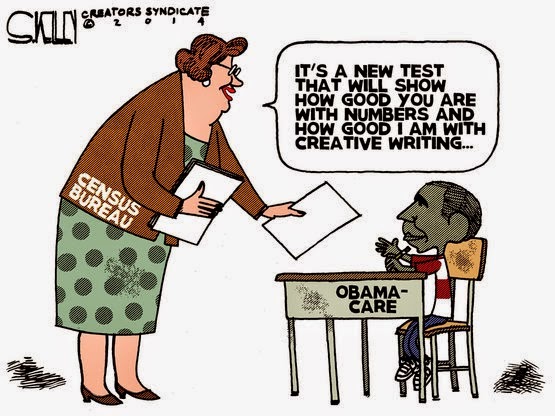 And then for my own part, I’ll lay down this marker for the future: If, in 2023, the uninsured rate is where the C.B.O. currently projects or lower, health inflation’s five-year average is running below the post-World War II norm, and the trend in the age-adjusted mortality rate shows a positive alteration starting right about now, I will write a post (or send out a Singularity-wide transmission, maybe) entitled “I Was Wrong About Obamacare” — or, if he prefers, just “Ezra Klein Was Right.”

We know that the real life answer is that there are no numbers they will not judge to be a success; success to them is the control over the system gained by federal bureaucrats and lost to doctors and patients; outcomes have almost nothing to do with it. Continued failure of Obamacare will only cause them to seek tighter control.

But they can't measure success accurately, because for 'some reason' they're changing the way the census counts insurance enrollment, in such a way that, all things being equal (and of course they're not) the questions will show an increase in enrollment:  A long version of the story here....


. . .A statement from Robert Gibbs, then White House press secretary, blamed the ex-nominee: "Senator Gregg reached out to the President and offered his name for Secretary of Commerce. He was very clear throughout the interviewing process that despite past disagreements about policies, he would support, embrace, and move forward with the President's agenda. Once it became clear after his nomination that Senator Gregg was not going to be supporting some of President Obama's key economic priorities, it became necessary for Senator Gregg and the Obama administration to part ways."

But Gregg had a different take on the disagreement, as the Washington Post's Ed O'Keefe reported:
Sen. Judd Gregg said today [Feb. 12] that his decision to withdraw from consideration for commerce secretary was due in part to his concern with the Obama administration's decision to have the next Census director report to senior White House staffers as well as the commerce secretary. . .

Now ObamaCare is providing evidence that Gregg was right to worry about politicization of the census. As the New York Times reports:


The Census Bureau, the authoritative source of health insurance data for more than three decades, is changing its annual survey so thoroughly that it will be difficult to measure the effects of President Obama's health care law in the next report, due this fall, census officials said.
The changes are intended to improve the accuracy of the survey, being conducted this month in interviews with tens of thousands of households around the country. But the new questions are so different that the findings will not be comparable, the officials said.
An internal Census Bureau document said that the new questionnaire included a "total revision to health insurance questions" and, in a test last year, produced lower estimates of the uninsured. Thus, officials said, it will be difficult to say how much of any change is attributable to the Affordable Care Act and how much to the use of a new survey instrument.

How very convenient.
Sebelius hopes to ride a wave of Obamacare popularity into the U.S. Senate (LOL)

In her darkest hour last fall, Kathleen Sebelius suffered one of the deepest cuts from an old family friend who accused her of “gross incompetence” over the rollout of the Affordable Care Act and demanded that she resign as secretary of health and human services. Now she is weighing revenge.
Ms. Sebelius is considering entreaties from Democrats who want her to run against that old friend, Senator Pat Roberts, Republican of Kansas.

Just a note: PPP actually polled a Sebelius run for Senate in late February. The formerly popular governor registered a 55 percent disapproval rating in Kansas, no doubt thanks to the bang-up job she did with Obamacare. She trailed Sen. Pat Roberts, 52 to 38 percent, and his GOP primary challenger, Milton Wolf, 46 to 39 percent.

After her astonishing failure at managing the Obamacare rollout, the citizens of Kansas would have to be crazy to elect her.
Posted by Fritz at 4:18 PM