Since 2000, shad abundance in the Bay has increased from 9 percent of the goal to 41 percent of the goal, with the Potomac seeing the most consistent rise in returning shad. Between 2000 and 2013, shad abundance in the Potomac rose from 12.4 percent to 129.4 percent of the target. Scientists attribute this increase to a series of factors, including improvements in water quality; a resurgence in underwater grass beds; the installation of a fish passageway at Little Falls Dam; a moratorium on recreational shad harvest; stocking efforts that reprinted fish to the river and kick-started the population; and the overall suitability of the Potomac as shad habitat.

“While there are several factors behind the shad recovery in the Potomac River, improved water quality is the cornerstone,” said Jim Cummins, director for living resources at the Interstate Commission on the Potomac River Basin (ICPRB) and co-chair of the Chesapeake Bay Program’s American Shad Indicator Action Team. “Without cleaner waters in the Potomac River, we would never have seen such a boost in returning shad. We’ve reached the sustainable fishery target for the river, but we are still working to achieve a more robust goal: to see the shad population healthy and fit, and to see the river run silver again. That’s not a ‘pristine river’ goal—that’s a goal we can achieve.” 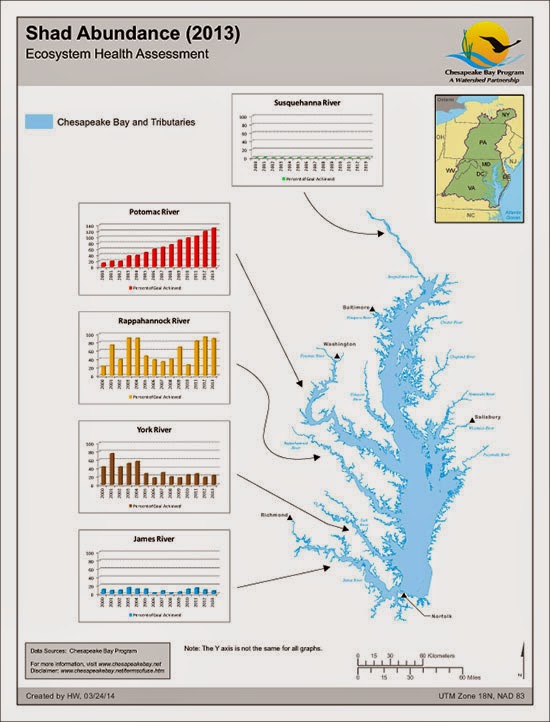 Good news, even if not universal.


Once one of the most valuable fisheries in the Bay, shad populations have declined in recent decades due to pollution, historic overfishing and the construction of dams that block the fish from reaching their spawning grounds. Commercial shad harvest is now closed across most of the region, and Bay Program partners are working to remove dams, install passageways that allow shad to reach upstream habitats and restock waterways with hatchery-raised fish. In addition, students in Maryland, Virginia and the District of Columbia are raising shad and releasing them into the Potomac River, bringing public attention to the importance of the once-forgotten fish.

The "Shad-Cam", the webcam in the fish ladder at Bosher's Dam on the James River is currently active, and with a little luck, you can see some shad pass by, as well as whiter Perch and Catfish.

Shad fishing is popular in the upper region of the tidal Potomac River around Fletcher's Landing, where you can rent row boats to go out and spin or fly fish for them.  There are two species mixed in, American and Hickory Shad. The season is now.
Posted by Fritz at 8:36 PM