Did you file your taxes yet?  We here at the Beach filed our months ago, and have already received our refund, which was bigger than normal due to the confusion over retirements.  We normally subscribe to the thought that you should not leave excessive money in the IRS's hands, but we overestimated this year.

It's overcast, and threatening rain here today. According to the radar, it should arrive shortly.

Obamacare Schadenfreude is just barely holding on, but here goes... 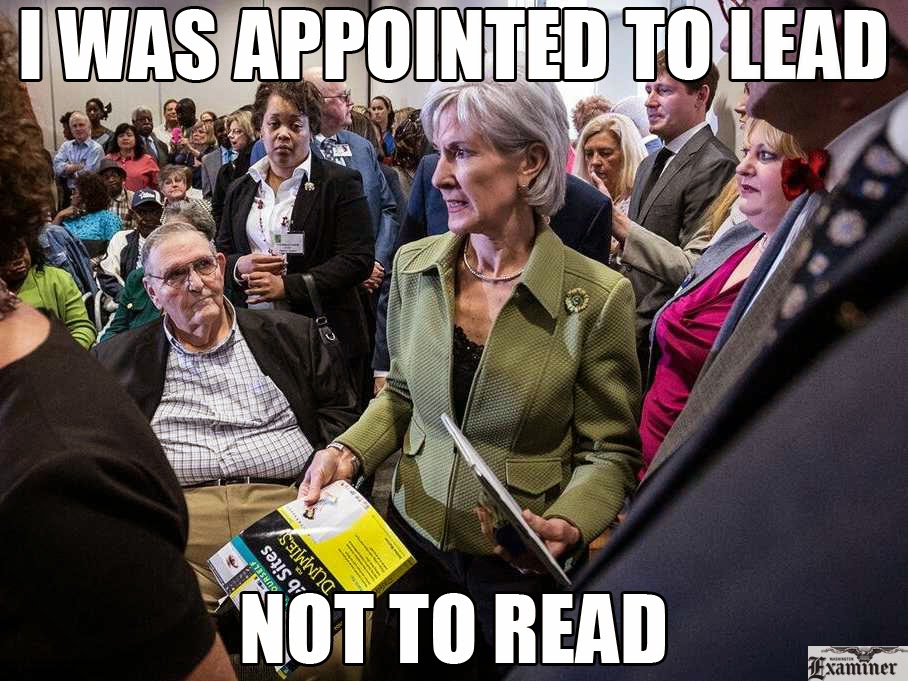 According to the Washington Post, Kathleen Sebelius career is (probably)  toast (I'm a poet!)


Sebelius is resigning as President Obama's Health and Human Services Secretary after the most turbulent seven months of her tenure. As she ponders her next move, Sebelius will have to come to grips with the reality that both nationally and back home in the state where she was once wildly popular, she's become a symbol of the Obama's administration's most polarizing policy. 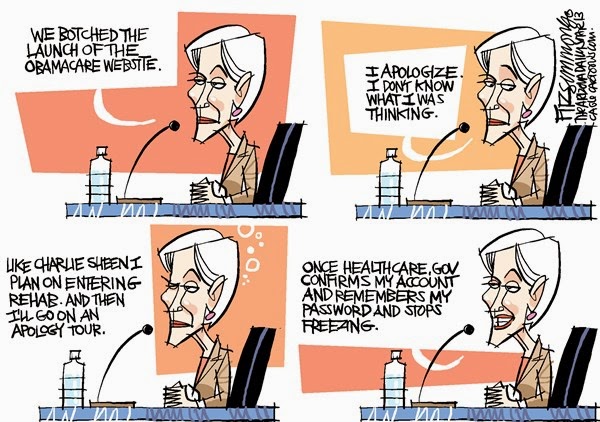 "Kathleen Sebelius may have a future in the private sector but her public office service is over," said Kansas Republican Party Chairman Kelly Arnold. "Voters in Kansas have never supported the idea of Obamacare and having Sebelius as CEO of it has turned Kansans away for any support for her." 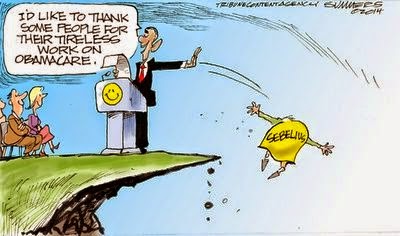 The story of Sebelius, 65, is a cautionary tale about the risks associated with joining a presidential cabinet, which is consistently a coveted perch for many pols. Once looked upon as a potential vice presidential candidate, Sebelius now arguably embodies the problematic implementation of Obamacare more than anyone not named Barack Obama. And that will make a return to elected office in Kansas -- should she want to pursue it -- extremely difficult. "I think she has no ambitions in Kansas electoral politics," said University of Kansas political scientist Burdett Loomis, who worked for Sebelius when she was governor. "The last small opportunity would have been to run for the Senate against Pat Roberts (R), and that simply wasn't going to happen."

Couldn't happen to a nicer woman. I'm sure the NGO/governmental alliance will keep her in tasteless, nutritious grub for the rest of her life, in the form of a make work job. 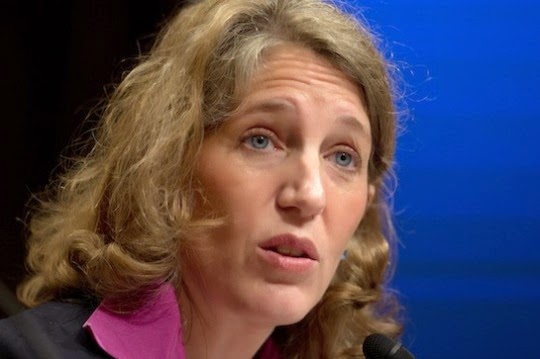 But what about her successor, Sylvia Mathews Burwell?  Are you old enough to remember that she demonstrated her loyalty to the Clinton machine by going through the freshly dead Vince Foster's garbage, looking for incriminating evidence?

Burwell served in several positions under the Bill Clinton administration, including as a deputy aide to then-budget director Jack Lew. In July 1995, Burwell (then Sylvia Mathews) was one of several key aides questioned by the Senate Whitewater Committee regarding the death of deputy White House counsel Vince Foster.

Foster’s death was officially ruled a suicide. The Clinton White House eventually admitted to misleading investigators about how senior officials had seized and disposed of files relating to the first couple’s controversial investments in the Whitewater Development Corporation, a failed real estate venture.
. . .
Under questioning, Sylvia Mathews and her colleagues denied impeding a police investigation into Foster’s death after his body was found in a northern Virginia park. According to the New York Times, Mathews testified “in laborious detail about what she had found in Mr. Foster’s garbage on the night he died.”

I'm plenty old enough, but I didn't remember such a small snowflake in the blizzard of scandal that was the (first?) Clinton administration.  Thanks to the Free Beacon for reminding us what kind of morals our leaders have.

How Being a Doctor Became the Most Miserable Profession: Nine of 10 doctors discourage others from joining the profession, and 300 physicians commit suicide every year. When did it get this bad? 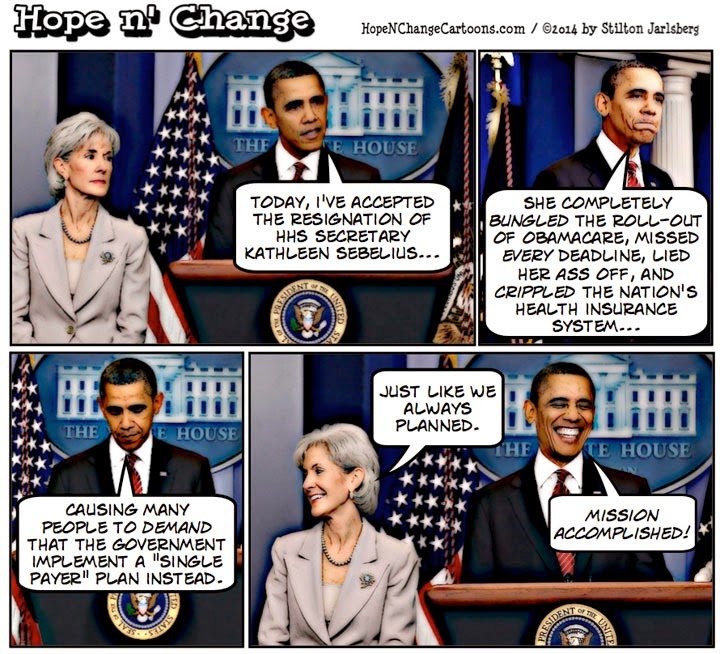 . . .It’s hard for anyone outside the profession to understand just how rotten the job has become—and what bad news that is for America’s health care system. Perhaps that’s why author Malcolm Gladwell recently implied that to fix the healthcare crisis, the public needs to understand what it’s like to be a physician. Imagine, for things to get better for patients, they need to empathize withphysicians—that’s a tall order in our noxious and decidedly un-empathetic times.

After all, the public sees ophthalmologists and radiologists making out like bandits and wonder why they should feel anything but scorn for such doctors—especially when Americans haven’t gotten a raise in decades. But being a primary care physician is not like being, say, a plastic surgeon—a profession that garners both respect and retirement savings. Given that primary care doctors do the work that no one else is willing to do, being a primary care physician is more like being a janitor—but without the social status or union protections.

Unfortunately, things are only getting worse for most doctors, especially those who still accept health insurance. Just processing the insurance forms costs $58 for every patient encounter, according to Dr. Stephen Schimpff, an internist and former CEO of University of Maryland Medical Center who is writing a book about the crisis in primary care. To make ends meet, physicians have had to increase the number of patients they see. The end result is that the average face-to-face clinic visit lasts about 12 minutes.

Neither patients nor doctors are happy about that. What worries many doctors, however, is that the Affordable Care Act has codified this broken system into law. While forcing everyone to buy health insurance, ACA might have mandated a uniform or streamlined claims procedure that would have gone a long way to improving access to care. As Malcolm Gladwell noted, “You don’t train someone for all of those years in [medicine]… and then have them run a claims processing operation for insurance companies.”

Which brings us back to yesterday's (and the day before's) point that Obamacare is a step along the road to killing concierge, pay it yourself, medical care, as it attempt to roll all the interactions between doctors and patients under its control.
Posted by Fritz at 8:53 AM