A Half Full Glass of Obamacare Schadenfreude

Still raining here today, for the third day in a row, expected to last most of the day and culminate in T-storms and a threat of tornadoes (now don't get all worried, in 30 years we've only had one close call). Meanwhile, Obamacare Schadenfreude keeps rolling over the countryside.

By way of Stacy McCain: A Typical ObamaCare Nightmare


. . .The very worst has been suffered by small businesses (both owners and employees) and by self-employed independent contractors. Statistics cannot adequately express what at an unprecedented nightmare many people have gone through. One of these ObamaCare victms, blogger Rich Vail, describes his frightening ordeal:


Last fall we received a letter saying that because of the myriad of changes that HHS had ordered health insurance companies to make to individual policies that were purchased on the open insurance market, that our health insurance would be cancelled…and it was despite they lies presented by President Obama and Sen’s Ben Cardin and Barbara Mikulski. “If you like your insurance, you can keep it, period.”
Because last year was a pretty good year for me, we don’t qualify for subsidies…so my insurance which had costs us $132 per month rose to $137 per week. We had the choice of paying that or the rent…
The problem now is that I have four fractured ribs…


Despite millions of Americans getting covered by Obamacare—which Democrats had long said would improve the health law's favorability ratings—public opinion remains negative.

Some 48 percent hold an unfavorable view of the Affordable Care Act, compared with 38 percent favorable—numbers that are virtually unchanged from previous months—according to the latest Kaiser Health Tracking Poll, released Tuesday.

In the time between the March and April polls, enrollment exceeded the administration's own expectations and was largely considered a successful start for the health law's exchanges.

"People's opinions are pretty set, and so divided by political party, that we think people are still judging the law through their partisan lens," said Liz Hamel, director of the foundation's public opinion and survey research. "Eight million is a lot of people, but in terms of the share reporting on public opinion of the law, it's a small share."

Over time, public opinion has remained steady, with the exception of a bump in the number holding negative views after October's messy launch of HealthCare.gov. It'll take time for sentiments to change as consumers use their new coverage, but for Obamacare to see positive ratings, Hamel said, people will also have to like that coverage. 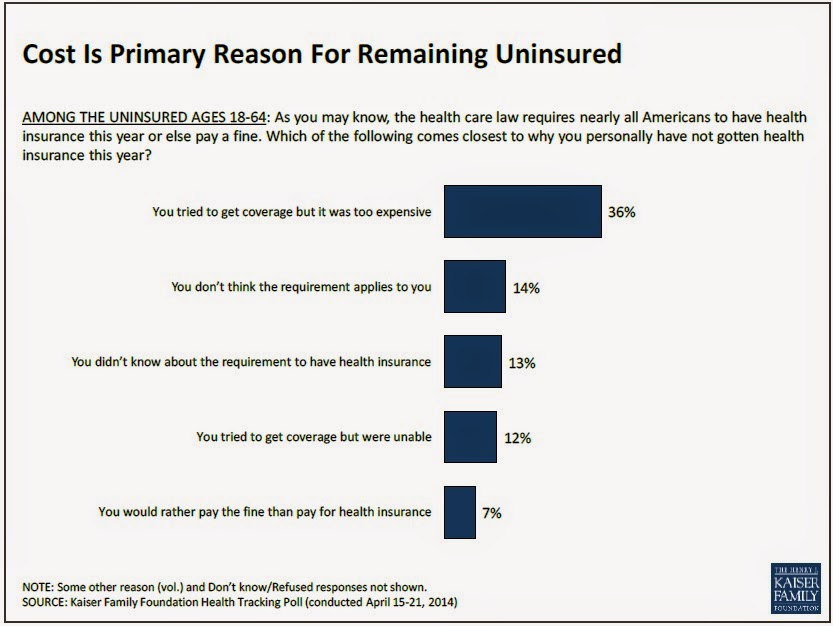 Why the uninsured are sitting out Obamacare - Short answer; it costs more than they want to pay
Price of fixing, upgrading Obamacare website rises to $121 million


Fixing the Obamacare website to get it ready to handle a second round of enrollments will cost the federal government $121 million, according to Accenture, the contractor hired to repair the glitchy website after the original contractor, CGI Federal, was fired in January.

The deal, which Accenture announced on its website Tuesday, costs more than the $93.7 million it took CGI Federal to build HealthCare.gov in the first place.

It’s also $30 million more than the government projected for fixes just a few months ago, when it called in Accenture on an emergency basis to try to keep President Obama’s signature domestic law on track.

“There doesn’t seem to be a light at the end of the tunnel for Obamacare website expenses,” said House Oversight and Government Reform Committee Chairman Darrell E. Issa, California Republican. “Developers are still being brought in to finish building HealthCare.gov, some states are abandoning their own failed sites, and federal taxpayers are still being handed the bills for it all.”

How many more million will it cost to incorporate Oregon's insurance plans, after the the Beaver state threw in the towel after spending $300 million on their own site?

Even the Washington Post is rebelling against the Administration's claims of victory: The White House’s Obamacare victory lap looking more like a false start

What's perhaps more telling is that, despite the rare good news of the past few weeks, their perceptions of the law remain basically as-is -- that is, pretty dim. To wit:
Almost all of these numbers are basically unchanged from in recent months. The one exception would be a slight uptick in the percentage of people who say the law is making things better (from 19 percent in December to 24 percent today).

But even with that, the law's long-term prognosis -- (ahem) so to speak -- hasn't changed, with Americans still seeing it as more expensive than it needs to be for both themselves and the country. And nearly twice as many still say the law is making things worse rather than making things better.

My very own congressman (for whom I did not vote) is a half full kind of guy. Steny Hoyer: ObamaCare is going to be, at worst, neutral in the midterm elections


House Minority Whip Steny Hoyer predicted on Tuesday that Obamacare will not prove to be the massive political liability for Democrats that Republicans hoped ahead of the 2014 midterm elections.
“I think health care at worst is going to be a neutral in this election,” said Hoyer (D-Md.) during a press conference. “This is not the holy grail of this election.” …
He even predicted that Democrats could pick up seats during the November elections. …
“We have good candidates, we’re raising good money,” Hoyer said, citing competitive races in Florida and Arkansas.

While Democratic commentator James Carville this a half empty sort of condition:


California Obamacare Director Peter Lee said he plans to provide the "human touch" during the next open enrollment period by targeting low-income and minority communities as well as prisoners who have recently been released from incarceration, reports California Healthline.

As Breitbart News reported earlier this month, several cash-strapped states are looking to dump health care costs onto the federal government by signing up prisoners for Obamacare.

Lee says enrollment efforts are "only just beginning" and that Covered California plans to tap 250 grassroots organizations to sign more people up on the highly unpopular Obamacare program.

Nothing like forcing people already under state control to enroll to boost enrollment.  At least the majority will be men between 18 and 34.

‘Repeal and replace’ is not the last hope for conservatives


. . . But as I noted above, there is good reason to believe that a “repeal and replace” approach won’t beat Hillary, because it will be too disruptive of people’s pre-existing health insurance arrangements.

To those frustrated conservatives who think that repealing Obamacare is our last fiscal hope, I say: “No. There is another.”

He must be a full glass sort of guy.