Another Bluebird day here in slower Maryland, sunny and 42.  A nice day out. Fortunately. we finished mulching yesterday.  But that doesn't mean that Obamacare Schadenfreude has withered up yet.

Megan McArdle Reacts to the news that the census questions regarding health care have been changed in such a way as to decrease the number of people who report being uninsured:

The census is changing the way they ask a question about being insured. The old way, they say, tended to overstate how many people were uninsured. (But note Obama was willing to rely on that overstated figure in making his case for the urgency of destroying the health care system.)

The new way is supposedly "more accurate" -- but will result in fewer people saying they're uninsured.

Coincidentally I'm so f***ing sure, these changes are implemented at the precise damn moment Obama wants to demonstrate a Big Impact of Obamacare.

Of course, he has cooked the books. Much of the change in the number of uninsured will come simply from the new way in which the question is asked, but he will imply or explicitly state (explicit lies are well within his wheelhouse) that the drop in uninsured is attributable to Obamacare.

As usual, Instapundit says it shorter:

WELL, WHAT BOOKS HAVEN’T THEY COOKED? Is Obama Cooking the Census Books for Obamacare?


For several months now, whenever the topic of enrollment in the Affordable Care Act came up, I’ve been saying that it was too soon to tell its ultimate effects. We don’t know how many people have paid for their new insurance policies, or how many of those who bought policies were previously uninsured. For that, I said, we will have to wait for Census Bureau data, which offer the best assessment of the insurance status of the whole population. Other surveys are available, but the samples are smaller, so they’re not as good; the census is the gold standard. Unfortunately, as I invariably noted, these data won’t be available until 2015.
I stand corrected: These data won’t be available at all. Ever.
No, I’m not kidding. I wish I was. The New York Times reports that the Barack Obama administration has changed the survey so that we cannot directly compare the numbers on the uninsured over time.

If the numbers were good, we’d know about it.

and reminds us that one of the first acts of the Obama administration was to put the census, and it all important data collection, under direct political control of the White House.  At the time they just thought it was for re-districting, but it's an all around useful knob.  He who controls the data drives the train.

That recent deceleration in healthcare spending? Yeah, that’s probably over

For about a decade, the rate at which healthcare costs inflate has been slowing down markedly, with an especial plateau in the last several years (from 2009 to 2012, the rate stayed at just under 4 percent) — a slowdown for which ObamaCare’s supporters have almost bizarrely been heard taking credit. The general downward trend in price growth is attributable to various advances in the healthcare system over the years, and the recent plateau is almost certainly due to the economic recession that had a lot of people declining/deferring healthcare services they might otherwise consume if their belts weren’t so tight. That’s exactly why I find it so weird that any advocate for the president’s crowning legislative achievement would try to assign the law the credit for the slowdown: It makes it much harder for them to dissociate any future price acceleration from the law, and since ObamaCare directly incentivizes a whole lotta’ people to consume healthcare services they wouldn’t otherwise, that’s going to be a particularly tough task.

A new report is suggesting that healthcare spending rates started to tick back upward again in 2013, probably thanks to a somewhat less sluggish economy, and that the return to the fast-growing pricing trend may be just around the corner. Via the LA Times:


A historic slowdown in U.S. healthcare spending in recent years may be drawing to a close.
An industry report published Tuesday and healthcare experts point to a steady rise in medical care being sought by consumers seeing specialists, getting more prescriptions filled and visiting the hospital. Other factors such as millions of newly insured Americans seeking treatment for the first time and higher prices from healthcare consolidation could also help drive up costs.
Experts aren’t predicting an immediate return to double-digit increases in medical spending. But the emerging trend underscores how difficult it will be for policymakers, employers and health plans to control healthcare costs going forward. …
David Gruber, director of healthcare research at Alvarez & Marsal, said he’s expecting a similar trend of higher demand coupled with consolidation among hospitals and large physician groups pushing up prices. He said the demand for services is being driven by an influx ofObamacare enrollees, aging baby boomers and people with chronic conditions who can no longer delay care.
“At some point you can’t defer anymore,” Gruber said. Health spending “isn’t going up by double digits, but it could spike to 6% or 7%.”

On the other hand, to the extent that slowdown of health care cost acceleration was due to the slow recovery of the economy, the Obama administration should be credited with it.


Even for Mark Dayton, this is a remarkable retreat. Last week Dayton refused to have one of his aides testify to a legislative panel investigating the MNSure debacle and exactly when the governor and his team knew of the massive problems in the state’s ObamaCare exchange. He held a press conference last week to accuse Republicans of ignoring all of the improvements in MNSure and how his team brought the system under control after the problems of “months ago”:


Seven days later, the Dayton administration threw in the towel and admitted that MNSure can’t manage itself:


After fumbling the job for more than a year, MNsure has hired an experienced IT company to coordinate the complex work needed to finish and repair its troubled health insurance exchange.
Deloitte Consulting is scheduled Wednesday to present its plans for moving the online marketplace forward during MNsure’s board of directors meeting. It isn’t clear how much the contract with Deloitte is worth, but MNsure’s preliminary budget earmarked at least $10 million for technical work this year.
The hiring of an outside company reflects a grudging recognition that MNsure is not capable of managing the project, a concern recently voiced by its independent auditor. The state agency was created to enroll uninsured Minnesotans as part of the Affordable Care Act, but its efforts have been hampered by a troublesome website that has frustrated thousands of would-be enrollees.
MNsure has “compartmentalized” tasks to such a degree that it cannot make sure the most important work is getting done first, leading to lingering website problems and “poor customer satisfaction,” according Software Engineering Services (SES) of Bellevue, Neb.
Overall, MNsure failed to make progress on 15 of 44 outstanding issues, worse than any previous quarter, according to the March 20 report. SES concluded that Minnesota “is unable to effectively manage the project.”

Public: Hey, Can We Get a Timetable for When You'll Be Releasing the Numbers for Actual Obamacare Sign-Ups? 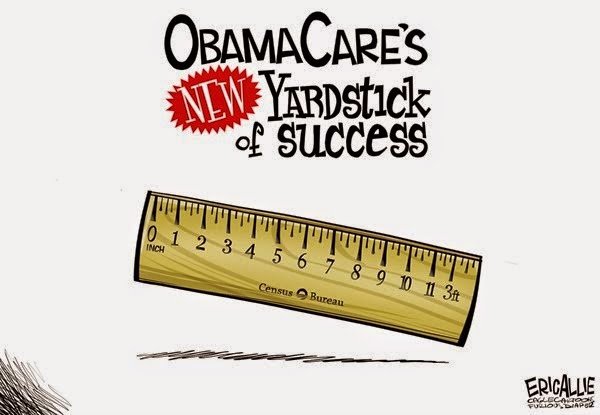 
Wheels are in motion, though, and the check is in the mail.


“I don't have a timetable for when that would happen,” he added.
Carney also noted that the timeline for releasing demographic information and details, such as who among the 7.5 million have paid their first month's insurance premium, is different than the timing for the administration's push to have the Senate confirm Sylvia Mathews Burwell as the next HHS secretary.

No doubt to make sure that Vince Foster's trash digger Mathews-Burwell won't have to show any understanding of the situation with Obamacare for her confirmation rubber stamping hearing.

Cartoons courtesy of stolen from Theo's.
Posted by Fritz at 8:47 AM