Tax Day Round Up!

You all filed your taxes on time, right?  Or a least applied for an extension, right?

OK, then, lets take a tour around the internet and see what you're getting for your taxes.

A good short one from the Instapundit: TWEET OF THE WEEK: “Taxes are the price we pay for 7 of the 10 richest counties being within commuting distance of DC.”  Living in one of those 7 counties, I know all about that.

Tax Freedom Day is three days later than last year due mainly to the country’s continued slow economic recovery, which is expected to boost tax revenue especially from the corporate, payroll, and individual income tax.

But it's really April 28 in Maryland, due to our high state taxes. This helps to account for record Tax Revenues:

Each month, the Treasury publishes the government’s “total receipts,” including all revenue from individual income taxes, corporate income taxes, social insurance and retirement taxes (including Social Security and Medicare taxes), unemployment insurance taxes, excise taxes, estate and gift taxes, customs duties, and “miscellaneous receipts.”
. . .
Although the federal government brought in a record of approximately $1,320,793,000,000 in revenue in the first half of fiscal 2014, according to the Treasury, it also spent approximately $1,734,057,000,000, leaving a deficit of approximately $413,264,000,000.

Charles Krauthammer would like to remind you that we've accumulated $7 trillion (with a "t") in five years:


1. It will take you 111 days this year just to pay off the government.

2. Those federal bureaucrats whose salaries you pay? A bunch of them are tax cheats.

3. You probably pay more in Medicare and Social Security taxes than you do in income taxes…

4. …And if you’re young, you’re probably never going to get that money back.

5. Pretty much everybody’s tax rates went up in 2013 thanks to Obamacare and the so-called fiscal cliff deal.

6. Most Americans believe their taxes are too high.

7. Even as they try to raise your taxes, only 5 percent of Democrats think their own taxes are too low.

8. Corporations are people? Not so much. They get way better tax treatment than actual people.

Speaking of number 7: Way Too Many Democrats Think Their Taxes Are Too Low


Gallup has a poll out today ahead of the April 15 tax-filing deadline showing that, when it comes to paying taxes, independent voters are far more likely to agree with Republicans than they are with Democrats.

None of this comes as a surprise. But Gallup has really buried the lede here. Check out the right hand column, which shows that 5 percent of Democrats think their federal income taxes are “too low.” 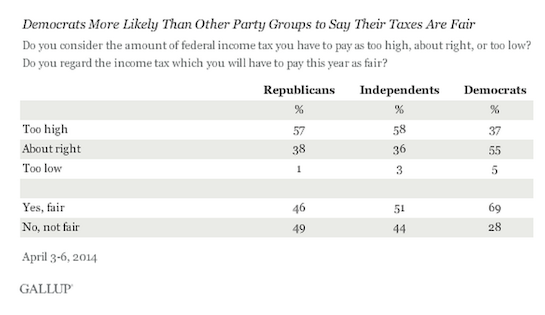 Time for another video break:

Meanwhile, the IRS Scandal has gone from toxic to septic:

By way of Stacy McCain: RNC Sues IRS for Stonewalling


The RNC believes the undue delay in producing the requested documents is unacceptable and inexcusable, given that many of these documents have been already produced to other requesting entities. Release of the requested documents is in the public interest, as Americans deserve to know how the IRS interprets and enforces the tax laws—and why it would deliberately target people because of their values and beliefs.
“We’re filing this suit because the Obama administration has a responsibility to be transparent and accountable to the American people. The IRS has a legal obligation to answer our inquiry for these records,” said RNC Chairman Reince Priebus. “On Tax Day especially Americans deserve to know whether they can trust the agency to which they’re sending their taxes.
“If the IRS and the Obama administration don’t have anything to hide, why not answer the request? Their delays and distractions make Americans think they’re trying to cover up their actions, just like ex-IRS employee Lois Lerner. We’re going to keep fighting to hold the IRS and Obama administration accountable because Americans deserve a government that treats them fairly and not one that harasses them because of their beliefs nor an administration that goes after its perceived political enemies.”


Ron Paul's nonprofit Campaign for Liberty will fight the Internal Revenue Service's demand that it reveal its donor list to the agency, despite having already been fined for refusing to do so.

But, the IRS wouldn't try to damage the Preznit's political opponents, would they?


According to new IRS emails obtained through a Freedom of Information Act request from Judicial Watch, former head of tax exempt groups at the IRS Lois Lerner was in contact with the Department of Justice in May 2013 about whether tax exempt groups could be criminally prosecuted for "lying" about political activity.

"I got a call today from Richard Pilger Director Elections Crimes Branch at DOJ ... He wanted to know who at IRS the DOJ folk s [sic] could talk to about Sen. Whitehouse idea at the hearing that DOJ could piece together false statement cases about applicants who "lied" on their 1024s --saying they weren't planning on doing political activity, and then turning around and making large visible political expenditures. DOJ is feeling like it needs to respond, but want to talk to the right folks at IRS to see whether there are impediments from our side and what, if any damage this might do to IRS programs. I told him that sounded like we might need several folks from IRS," Lerner wrote in a May 8, 2013 email to former Nikole C. Flax, who was former-Acting IRS Commissioner Steven T. Miller's chief of staff.

It being Lois Lerner, a democratic party hack, we can be moderately confident she wasn't interested in prosecuting democratic abuses of the  501(c)(4) exemption.  But certainly, the Department of (in)Justice wouldn't lower itself to such crass political hackery?

"I think we should do it – also need to include CI [Criminal Investigation Division], which we can help coordinate. Also, we need to reach out to FEC. Does it make sense to consider including them in this or keep it separate?" Flax responded on May 9, 2013.

I guess they would, after all. In fact, it's the Department of inJustice reaching out to the IRS for assistance with the political persecution, and Lois Lerner playing along.  Taking the 5th?

In True the Vote case, targeting IRS staff ‘did what they were asked’

The IRS has been hopelessly compromised by partisan politics. A simpler tax code to reduce the necessity for such a large work force, and political "Affirmative Action" (my "Modest Proposal") on federal jobs ought to fix it.
Posted by Fritz at 5:05 PM